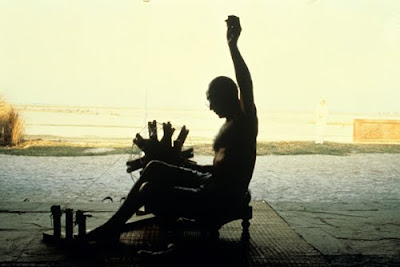 Roger Ebert classifies a particular set of films as “Gandhi” films. What he means by this is a film that you are happy to have seen, but that you never wish to see again. I can think of several films that fit that qualification for me--Requiem for a Dream, American History X, and a few others. Oddly, though, Gandhi doesn’t fit in that category. It’s been years since I watched it until today. I’d watch it again in the future, but it will be some time before I find the need or desire to see it again.

As the name of the film suggests, this is a biopic of the life of Mohandas K. “Mahatma” Gandhi, the central figure in India’s push for home rule and independence from the British Empire. It is not a complete biopic, of course. It starts with Gandhi’s time in South Africa, figuring (correctly) that the audience is less interested in the formative years of Gandhi’s life and more interested in the formative years of his philosophy. Gandhi (played by Ben Kingsley) discovers that South Africa is brimming with racism, not just against the Africans, but against anyone who isn’t white. In what will become a theme for the entire 190-minute running time of the film, Gandhi fights against this oppression without raising his hand against it.

He returns from South Africa as a sort of ethnic hero—he fought for the rights of Indians in other parts of the Empire and won, and thus might be persuaded to do the same on the home front. For the British, Gandhi becomes something divisive. Those of a more liberal bent find him a hero while the conservative members of the Empire find him a menace.

As the film progresses, we witness Gandhi’s struggle and the struggles of those who fight beside him including Mohammed Ali Jinnah (the eventual founder of Pakistan, played by Alyque Padamsee), Pandit Jawaharlal Nehru (Roshan Seth), and Sardar Patel (Saeed Jaffrey). He is also assisted by several from other parts of the Empire like minister Charlie Andrews (Ian Charleson), American journalist Walker (Martin Sheen), and a British supporter who he grants the name of Mirabehn (Geraldine James). As with South Africa, Gandhi’s resistance to British rule is not passive, but is also not violent. He refuses to lift a hand against anyone, instead making such a pest of himself by flouting unjust laws that eventually the laws are forced to change.

This more than anything is the power of this film. Over and over, Gandhi’s ideals of pacifism are put to the test. Over and over, the British respond to general strikes (masquerading as days of fasting and prayer), marches, and conscious, conscientious objection to laws with violence. One scene in particular, the massacre at Amritsar, is particularly brutal. Banned from meetings, a gathering of thousands of Indian civilians is broken up by an armed response from the British military, who fired more than 1600 rounds into the crowd, with an estimated 1000 killed.

Gandhi’s response, though, is always to remain non-violent, to take the blows of the oppressors and hold up their behavior to the scrutiny of the world. As India begins to gain home rule and separation from the Empire, violence between Muslims and Hindus breaks out. Gandhi’s response is to fast until the violence stops, sacrificing himself for the greater cause. Surprisingly (and historically, evidently), this tactic works—people are so concerned over the health of this frail man that the violence ceases.

Of course, with a life like Gandhi’s, there can be only one way it will end. All a man of vision and peace needs to complete his legacy is a lone gunman with a couple of bullets. The film both starts and ends here, coming full circle after three hours.

What is also extraordinary here is the costuming and makeup. Ben Kingsley goes from a young man with a full head of hair to a wizened old man, almost bald and with only a few teeth remaining to him. Kingsley’s physical transformation is as noteworthy as Gandhi’s constancy in staying true to his ideals throughout.

The casting is also intelligent all the way through. Many of the cast, like Roshan Seth and Amrish Puri, who plays a man named Khan, are longtime stars in Indian films. These two are most familiar to non-Indian audiences as cast members from the second Indiana Jones film (Puri played Mola Ram, just for reference). South African leader General Smuts is played by playwright Athol Fugard, who was long an opponent of the Apartheid system. These are small touches, but they add even more respectability and clout to the proceedings.

The one issue here is that this film is long, and perhaps needlessly so. For instance, Candice Bergen shows up as Time/Life photographer Margaret Bourke-White. For all the star power she may have had when this film was made, she and her character add little to the film. In fact, her presence merely seems to emphasize that Gandhi is becoming known and respected in the West rather than simply in India.

This isn’t to say that Gandhi drags, because it does not. It simply feels bloated in places. It would still be suitably epic in scope and in story with 20-30 minutes snipped out here and there, and I would challenge anyone to miss what was cut by the hands of a talented editor. Even with some needless footage, though, this is required viewing.

Why to watch Gandhi: Mohandas K. Gandhi was a seminal figure of the last century.
Why not to watch: This is the Energizer Bunny of movies.