Are spy films a genre? I’m not sure if they are despite the fact that I can think of three prominent spy-themed film franchises—James Bond, Mission: Impossible, and the Bourne films. If you lay them end to end, there’s something to be said for each of them. Bond certainly has the longest legs, having gone through a half dozen or so actors in the main role and nearly two dozen films. The M:I films are good (I guess—I stopped after the first one), and the most recent got a lot of praise. Still, for consistent quality, I’d go with Bourne every time. Leaving off the one that is opening later this year, the three current films in the series are all top-notch. 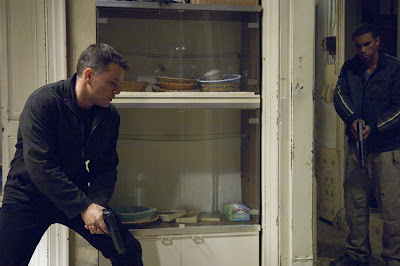 Strangely, only The Bourne Ultimatum makes The List. However, in preparation for watching it today, I watched the first two over the last couple of days. As it turns out, I’d seen the first two before but not the third; I rewatched the first two specifically to get me prepared for the third one. I’m not sure how well the third film plays on its own—the same thing could be said of, say Return of the Jedi which requires some prior knowledge. Anyway, primed with the first two in the series, I went into the third one hoping it lived up to its older siblings.

It does. Oh, boy does it ever. It’s helped tremendously by the fact that it was directed by Paul Greengrass, who also directed the second film, The Bourne Supremacy. It’s further helped by the fact that some smart decisions were made in the second film to lead into the third one. The mark of good storytelling and good filmmaking is that the films work on their own episodically, but also work in a different way watched end-to-end.

What I mean is this--The Bourne Ultimatum picks up immediately after not the end of the second film, but the climactic moment of the second film, with Bourne still in Moscow. We see his escape from the situation, something that is glossed over at the very end of Supremacy. As it turns out, that fun little coda at the end of the middle film is replayed here. What happens in the first two acts of The Bourne Ultimatum happens in between that climax and the denouement of the second film, and turns that denouement into the thrust of the third and final act of the film.

The Bourne films, all three of them, are most noteworthy for the level of action. All three have tremendously choreographed fight sequences, each one memorable in their own way. As an added bonus, all three films (particularly the second and third) have some of the most intense and beautifully filmed chase sequences in recent years. It occurred to me at one point that Jason Bourne (Matt Damon) has more car accidents in a weekend than most people have in their lives. He tears the crap out of his vehicles and generally manages to limp away at the end.

The central conceit of the films is that Bourne is a CIA operative who has lost his memory after a botched assignment. As the films progress, he learns little pieces of his past and discovers that he was an operative in an ultra-secret black ops branch so clandestine that it doesn’t officially exist. In each film, something happens that brings him back to the attention of the Company and agents are dispatched to neutralize him. Essentially, the films are entirely about his survival and his slow discovery of his disturbing past.

That, more than anything, is what makes the action scenes work. Bourne is always concerned not just with getting away, but with doing anything he has to to ensure his survival. This means that the fist fights are brutal and devastating and the chases involve the sort of driving that seems possible only for someone with incredible skill and absolutely nothing to lose. Because he has everything on the line at all times, he always plays full out in every situation. Every time he encounters someone or something from his past, it’s a literal battle for survival, and thus a fight to the death. The stakes never get lowered.

The films are also ably assisted by a great cast of actors, many of whom don’t make it to or through the final film. In particular, Joan Allen as CIA agent Pam Landy is given the difficult role of being both one of Bourne’s main chasers and with being (ultimately) sympathetic both to Bourne and to the viewer. She manages this beautifully, slowly over time coming to side with Bourne’s struggles and against her superiors. The final film introduces Noah Vosen (David Straithairn) as the main foil, a role he seems almost born to play. Straithairn is capable of a particular level of scorn and sarcasm few others (Kevin Spacey comes to mind) can manage. Julia Stiles as agent Nicky Parsons is worth some mention, too. She hasn’t always made the best film choices in her career, but these films show she’s capable of nailing a role.

In short, I love all of these films. The Bourne Identity serves as a fantastic introduction to the pace and pacing of the films as well as to the characters. The Bourne Supremacy and The Bourne Ultimatum make a perfectly matched pair that go perfectly as a double feature.

The complaints I have are minor. It’s worth saying that anyone interested in this film should watch all three. That’s not a hardship, though—all three are worth watching. Second, I’ve read the book the first film is based on, and it’s dishwater dull. Don’t waste your time. Third, since these three films form a complete story, a new film with a new person playing Jason Bourne feels like an unnecessary cash grab. It might well be great, but I have my doubts that I’ll believe anyone other than Matt Damon in the role.

Why to watch The Bourne Ultimatum: It’s the modern standard for action films.
Why not to watch: You’ll need a day, because you should watch the whole trilogy.