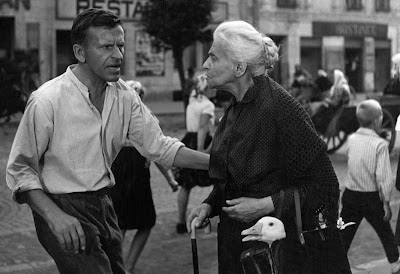 The last three reviews I’ve posted take place during World War II, and all three have a significant Jewish component. Naturally, today I decided to make it four in a row. I’ve heard great things about Obchod Na Korze (The Shop on Main Street), so it’s been on my radar for some time. I really knew nothing about it. As a matter of fact, I continued to foolishly mix it up with Ernst Lubitsch’s The Shop Around the Corner until quite recently.

Yeah, they aren’t the same movie at all. This isn’t anything like a sweet little romance that was remade into an ad for AOL starring Tom Hanks and Meg Ryan. It is instead a home front war drama, with the home front being in Czechoslovakia. Tono Brtko (Jozef Kroner) is a simple carpenter who doesn’t want to make a lot of trouble. He’s got enough of his own, mostly caused by his shrew of a wife, Evelyna (Hana Slivkova). What makes things worse for him is that his wife’s sister’s husband has made good.

Of course, “make good” is a relative term. In this case, Markus Kolkotsky (Frantisek Zvarik) has made good by becoming the local town commander for the Germans. He wears a uniform, offers the Nazi salute to those he sees, and otherwise acts exactly as a guy running a town for the Nazis is expected to act. He and his wife Rozika (Elena Pappova-Zvarikova) arrive at Tono’s house one day bearing gifts of food and booze. Tono, though is terribly upset. There is a monument going up in the middle of town, and Tono was told he could not work on it.

But Markus has something better. The town is, by decree, submitting to Aryanization, meaning that Jews are longer able to own their own stores. Instead, any Jewish-owned business is being subjected to having an Aryan manager. In many cases, this means that the Aryan manager will take all of the profit from the store, leaving the actual owner destitute and starving. Tono, though, has been made the manager of the sewing store owned by Mrs. Lautmannova (Ida Kaminska).

What Tono discovers on his first day at the shop is that Mrs. Lautmannova has very little inventory, sells almost nothing, and makes no money. She is mostly deaf, forgetful, and does not appear to be living in the real world. Instead, she is lost in her own world. Today, we’d say she was suffering from Alzheimer’s disease, and that’s as good an explanation as any. She does not understand what Tono is doing in her shop or his function until this is explained to her by Imrich Kuchar (Martin Holly, Sr.), an accountant. He tells her that Tono is there to help her with the store. He tells Tono that the Jews in the area take care of their own—Mrs. Lautmannova lives on donations, and he’ll get donations as well as thanks for taking care of the old woman. Additionally, they pay him so that another, likely ruthless person is given the old woman’s shop instead.

Tono, naturally, begins to feel responsible for the old woman and begins to help her as much as he can. He’s hardly a natural at running the store, but he is a good carpenter and spends a lot of his spare time fixing her house and repairing and restoring her ancient furniture. For her part, she treats this new presence in her life like a favored relative, giving him her late husband’s old clothing and cooking for him.

All is well until the inevitable. Eventually, everywhere in Europe conquered by the Nazis had a period of rounding up the Jews and packaging them off to camps, and naturally it happens here as well. This leads to a crisis of conscience for Tono, who isn’t sure whether he should turn in the senile and mentally cloudy old woman or find a way to hide her. In her world, this is not a result of war or Nazi policies, but a good old-fashioned pogrom. The conclusion is similarly inevitable and terrible.

Like many of the best World War II stories, Obchod Na Korze works not because the story is extraordinary but because the story is so entirely ordinary. It is incredibly human and real, and it is this fact that gives the story all of its power. Most of the drama takes place inside the head of Tono, who must balance his spiritual need to protect the old woman with his wife’s greed for what she imagines to be the old woman’s money and the necessity of appearing to be in charge of Mrs. Lautmannova rather than caring for her. Ultimately, it is Tono’s undeniable humanity that drives the third act of the film and leads it to its conclusion.

There aren’t a lot of genuinely happy films from World War II, and there probably shouldn’t be. Obchod Na Korze ranks among the most depressing I’ve come across, but this seems to fit in with the stereotypical Slavic character as well as the story being told.

This is another film in the long list of those that I am happy to have seen, and it’s a film that everyone should see. It’s not one that I look forward to seeing again, though. And I think I might watch something a little lighter and with a happy ending tomorrow. Enough is too much.

Why to watch Obchod Na Korze: A unique story for a common topic.
Why not to watch: It’s the most depressing thing going.