It’s an admission of mine to say that I was never really a part of the drug culture. Oh, I certainly saw my share of it, but I wasn’t much of a participator. My drug of choice in my college days was alcohol, and thus most of my drug-related stories involve booze instead of anything else. I don’t say this from a place of superiority (moral or otherwise) but from a place of fact. Drugs didn’t interest me that much, and I got my drinking out early. These days I don’t drink much. All of this makes it more difficult for me to really grok stories that center around drug culture. 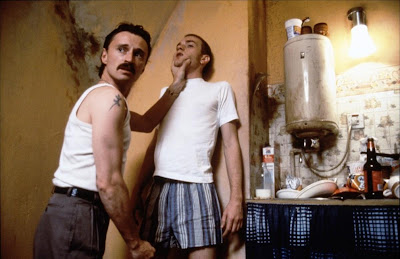 This brings us to Trainspotting, a film that I’ve certainly heard out almost since it came out but have to this point managed to avoid seeing. I’ve even owned a copy for a year but still haven’t seen it until today. What I expected (at least from what I had been told about this film) was something akin to a Guy Ritchie film, something like Snatch or Lock, Stock and Two Smoking Barrels. Except for the sometimes impenetrable accents, though, there’s not a lot of commonality here. The person or people who told me this film was funny lied to me.

This isn’t to say that there aren’t some darkly comic moments here—there are plenty, and they are both very funny and very dark. I would never call this a comedy, though, nor a dramedy. This is a film about addiction and breaking addiction, in its own way as serious and painful as The Lost Weekend; in fact it’s even more so, considering the addiction here is heroin and not alcohol.

We spend most of our time with Renton (Ewan McGregor), who tells us at the start of the film that he has opted not to choose life and everything that comes with it—a job, a mortgage, the eventual slow fade into death—but has instead chosen to be a heroin addict. He knocks around Edinburgh with his friends, several of whom are equally smack-addled. These are the smooth, con artist wannabee Sick Boy (Jonny Lee Miller), the clean-cut and heroin-avoiding Tommy (Kevin McKidd), the goofy and dim Spud (Ewen Bremner), and the violent and drunken Begbie (Robert Carlyle).

While much of the story deals with the short ups and very low downs of this group, in the main it is concerned with Renton’s attempts to kick the heroin habit. These attempts and later relapses lead us into some very dark territory. Some of these moments, like Renton’s adventure in Scotland’s worst toilet with some opium suppositories, are disgusting and blackly comic. Others, like the death from neglect of Dawn, the infant daughter of Sick Boy and his girlfriend Lizzie are simply dark. This is especially true when the solution for Lizzie’s screaming is to inject her with heroin.

The darkest moments in the film come after Renton, on methadone to curb his addiction, overdoses on heroin and is forced to go cold turkey at his parents’ home. His methadone comes on court order after he and Spud are arrested stealing to feed their habit. Spud, who has a record, is sentenced and sent away. While going through withdrawal, Renton relives his tryst with underage school girl Diane (Kelly MacDonald), sees a surreal game show featuring his parents with questions exclusively about AIDS, and sees Lizzie’s dead child crawling on the ceiling. It’s here that I was most reminded of The Lost Weekend, which includes a similarly harrowing detox scene. This one, though, is in many ways more vivid and in many ways more disturbing.

This scene provides a break between the first half of the film and the second. From this point forward, Renton is essentially clean from heroin and moves to London, but is still forced into dealing with the terrible decisions of his friends. Tommy, once an athlete and relatively clean, has become a full-blown smack addict and contracts AIDS, dying from an infection caused by his pet cat. Sick Boy wants to take Renton’s money to buy a load of cheap heroin. Begbie, in the meantime, has committed armed robbery and leaves Scotland for Renton’s apartment in London.

Trainspotting is short on actual plot, but that doesn’t really matter. In many ways, it’s a character study of Renton and his struggle with heroin, and there’s enough left open at the end that there’s no simple way to tell how he will fair. Yes, he’s clean. Yes, he’s intending to stay clean. But that’s something we’ve seen from him several times already during the course of the film. Essentially, the film takes a chunk of time out of his life and shows it to us, the bad decisions and the scant good ones.

It’s an impressive film. It’s aided greatly by deft direction from Danny Boyle, who has always had a good eye and a firm hand on what he shows. He’s also smart enough not to provide a judgment on anything. Even at the end, when Renton is walking away from his friends and (we hope) walking into a new, clean life, there’s no judgment on what has transpired in the past. What happens is simply fact, neither good nor bad. It simply is.

This is a strong film, and a powerful statement from a guy making only his second theatrical release. Trainspotting may not live up to its billing as a comedy (sorry, but a dead infant killed through neglect pulls this film out of comedy territory), but it does manage to live up to its hype.

Why to watch Trainspotting: It’s one of the most brilliantly made British films of the last several decades.
Why not to watch: Unless you’ve got a sick sense of humor, this isn’t as funny as you think it’s going to be.