I have a strange history with my genealogy. I don’t have a great deal invested in my family’s past, but a few other people do. Several years ago, my aunt gave me boxes of genealogical material from my mother’s side of the family. I’m still not 100% sure why she gave it to me. Years before that, a distant relative started sending out a newsletter to everyone with the same last name containing tidbits of our ancestral past back to about 1640. So I know something of my family’s history through no effort of my own. 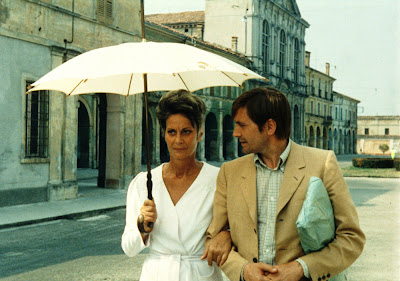 That’s relevant here, because La Strategia del Ragno (The Spider’s Stratagem) is a film about family history and more specifically about the skeletons that lurk in our ancestral closets. What starts out as a simple request becomes a long and tortuous path into hidden meanings, shady dealings, betrayal, and murder. Almost in spite of itself, La Strategia del Ragno becomes a film noir or an homage to same.

Athos Magnani (Giulio Brogi) journeys to Tara, the small town of his father, also named Athos Magnani (and also played by Brogi). He’s there at the request of Draifa (Alida Valli), who calls herself his father’s “official mistress.” Magnani Senior was a known anti-fascist and was assassinated by an unknown fascist in 1936. Magnani Junior discovers a monument to his father and it seems that everyone in town knew the man as a staunch fighter against Mussolini and his ilk. And yet there’s something else going on, something below the surface that doesn’t quite seem to add up.

As the son begins to pry up the old floorboards of the past, we learn that there was a plot among his father and his three friends, Gaibazzi (Pippo Campanini), Rasori (Franco Giovanelli), and Costa (Tino Scotti) to kill Il Duce, who was planning a visit to Tara. Their plan, which went through several ideas, was to ensure the death by using dynamite, and to make sure of the kill by blowing up Mussolini during the opera. Evidently, Mussolini got wind of the plan and never showed up to Tara, and later, Athos Magnani was assassinated by a bullet from behind—at the same opera and at the same point in the opera as the planned assassination of Mussolini.

As the story begins to unfold, Bertolucci plays with the concept of how we experience time in the narrative. Frequently, we move back and forth between the present and the past within the same shot. Athos Magnani, both father and son, begin to blend into the same character, and at times, it is difficult to distinguish when we are in the story with any sort of accuracy. The spider’s web implied by the title isn’t one of silk, but of threads of time, forcing a sort of constant evaluation and re-evaluation of which version of Athos is speaking to us. This is further complicated by the fact that the younger Athos appears to be falling for Draifa, meaning that even moments of relative intimacy with her are no clue as to the time of a given scene.

This has two effects that appear to be at odds with each other, but which also work perfectly within the context of the film’s narrative. On the one hand, it is virtually impossible throughout the film to have a grip on what is going on. Most of the time, a scene is continuing for half a minute or so before it becomes apparent that we have shifted from son to father or vice versa. It forces attention on itself. It’s also disturbingly beautiful to watch, creating a dream-like structure to the piece that allows us to seamlessly travel back and forth over 30 years within the context of a single conversation or a single sentence.

As should be evident, La Strategia del Ragno is by no means an easy film. It is purposefully dense and obtuse, and specifically challenging to the viewer. This is not a film that can be watched half-heartedly or with divided attention, and even then, it requires constant thought and attention. It is also masterful, and with the possible exception of The Last Emperor, is also the greatest evidence of why Bertolucci is as esteemed a director as he is.

La Strategia del Ragno is unique in that it is easy to understand where it starts, and the end is similarly evident and easy to follow. The path between, though, is very convoluted and obscured. Much like a spider’s web, it’s simple to go from edge to center, but almost impossible to trace the same path a second time. There’s a lot here, and far more than I am probably capable of bringing out, but it’s one worth the time to see it, and worth it to see it more than once.

Posted by SJHoneywell at 4:06 PM