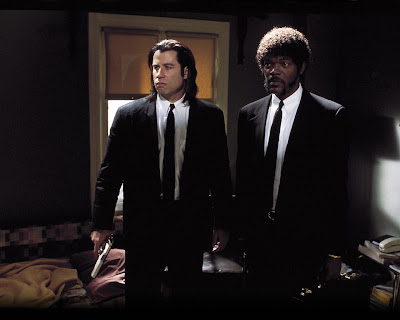 I haven’t been shy about the fact that I think Quentin Tarantino is overrated as a director. My biggest issue with him isn’t that I don’t think he’s any good as a director; it’s that he shows a great deal of evidence that he believes all of his press. I have some problems with his sensibilities as well, which we’ll get to eventually. But really, my problem with Tarantino is that he’s lost control of his ego. That’s sort of my problem with Pulp Fiction, too.

See, Pulp Fiction really was a seminal film in a lot of ways. More importantly, it holds up. It’s just as good today (or almost as good) as it was in 1994. Tarantino lived off this movie for almost a decade though. Except for Jackie Brown and a segment of Four Rooms, he didn’t put out another film until 2003. There’s no reason for that, really, except that he was living off this film.

I’m not going to attempt to describe Pulp Fiction. If you’ve seen it, you know that it’s non-linear. The order of the film isn’t explained. Characters appear for a few moments in one part only to be featured in another part. We spend a good deal of time with Vincent Vega (John Travolta) and with Jules (Samuel L. Jackson). We meet Butch (Bruce Willis) and Marcellus Wallace (Ving Rhames) and his wife Mia (Uma Thurman). There are all sorts of crazy violence and drug use. For all the skipping around in time, it’s wildly entertaining. I will not deny it.

But it’s also a Gordian knot to unravel in terms of a plot summary. So I’ll try to do this quickly. Marcellus Wallace has lost something and he sends Vincent Vega and Jules to get it back. They do, and they manage to kill a number of people doing it, including one guy killed accidentally. This means they need emergency help from a guy named Winston Wolfe (Harvey Keitel). At the same time, Butch the boxer is told to throw a fight by Marcellus. Rather than throw it, he kills his opponent and needs to go on the lam because Marcellus will hunt him down. However, his girlfriend Fabienne (Maria de Medieros) forgot his watch at the apartment. We learn via flashback with Christopher Walken exactly what the watch means to Butch. He goes back for it, and eventually encounters Marcellus. They fight, but are rounded up by a couple of guys in a pawn shop who evidently enjoy raping men. Butch saves them both and leaves. Oh, and Jules foils a robbery and quits the hit man business.

So let’s talk about the stuff that doesn’t work for me. There is a long sequence in the middle in which Vincent Vega and Mia Wallace go out for a night on the town with Marcellus’s permission. It’s a cute scene until we get to the drug overdose part. The first time I saw this, I liked this part of the film, but now, after several watches over the last 18 years, I find this scene drags. It goes on about five minutes too long for me, and it doesn’t really do anything for the film. We get a quick reference to it later (and it’s a brief conversation between Vincent and Mia) and that’s really it. Similarly, there’s a lot of chaff in Bruce Willis’s scenes. I don’t really care at all about the dialogue with Fabienne, and the scene in the taxi is completely unnecessary.

But, Pulp Fiction is still a great film. There’s still a lot here worth watching, and as I said above, it’s a film that holds up really well. It’s also a seminal film for a lot of the players in it. It revitalized Travolta’s career and in many ways created Ving Rhames’s career, at least for a few years afterwards. It also solidified Samuel L. Jackson as a badass in the minds of the movie viewing public.

This film is Tarantino at his best, and it’s a best he may never equal again. What I truly dislike about Pulp Fiction is that he seemed to learn the wrong lesson from it. It was such a success that he evidently decided that all of his movies should follow a similar pathway. The obscure references here are fun; in subsequent films, they just end up annoying me. To put it another way, I’d love to see Tarantino stop trying to be awesome and start trying to be simply good. With Pulp Fiction, he was just trying to make a good movie, and he made a great one. If he can learn to leave his ego out, he could continue to shoot for good movies that turn out great.

I said at the top I have some problems with Tarantino’s sensibilities, and I do. The problem is simply this—everyone in all of his movies is depraved or a criminal. There isn’t a single normal person anywhere. In this respect, his work reminds me of a film like Sin City, which was visually stunning and morally reprehensible. Would it be too much to ask for a single person who isn’t a criminal, lunatic, or deviant?

Evidently, the answer to that is “Yes.” It would be too much, more’s the pity. But that doesn’t matter here, because Pulp Fiction, even with its few stumbles, is rightly regarded as one of the best and most important films of the ‘90s.