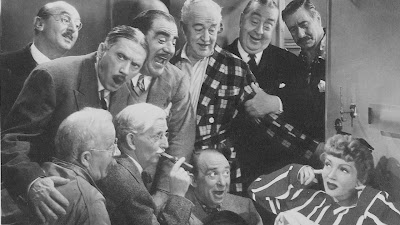 So what do you get when you combine unbridled conspicuous consumption, racism, a deus ex machina several times over, and a ridiculous level of egotism and entitlement? You get The Palm Beach Story, yet another film from the earlier years of Hollywood that seems to exist for no other reason than to piss me off.

However, there’s no other way through this but to do it, so here goes. Geraldine “Gerry” Jeffers (Claudette Colbert) and Tom Jeffers (Joel McCrea) are a married couple on the skids. Tom is a pretty good architect, but he’s not getting anywhere, and he has a ridiculous idea of building an airport not on the ground but on wires suspended above a city. Roll that around in your brain for a minute before we continue. Don’t worry. It gets a hell of a lot worse.

Because Tom isn’t making it, he and Gerry aren’t making the rent on their extremely posh apartment, and poor Gerry isn’t able to do things like buy herself dresses. She, in fact, doesn’t do anything. She admits straight off that she can’t cook or keep a house, and she certainly isn’t working for a living. One fine morning, their landlord shows up to rent the apartment to someone else, and it turns out it’s a mostly deaf gentleman who calls himself the Wienie King (Robert Dudley). He’s rich enough to give Gerry money to pay all her bills and cash besides. I tell you this to give you a sense of the scope of their apartment—a guy who in 1942 has $700 to toss away on someone he just met is looking to rent it.

With this new wealth, Gerry pays off their outstanding debts, buys herself a bunch of stuff and manages to scrimp together $14 for Tom as his share. And then she tells him she wants a divorce, because they can’t keep their posh apartment, and, well, fuck you. No, she doesn’t say that, but that’s sort of the spirit of it. Because Tom’s suspended airport idea isn’t going anywhere, she’s not willing to move to somewhere affordable with him. It’s easier just to chuck the whole thing.

As it turns out, her goal is to get a quickie divorce in Palm Beach and then find a rich guy to shack up with so that she can snooker him out of the money for Tom to build his prototype airport. See, she’s doing it for his good. He’s naturally opposed, but she runs away and hops a train, essentially depending on the kindness of a bunch of drunken millionaires going on a shooting holiday to pay for her. On the train she meets a man who turns out to be one of the richest men in the world. This is J.D. Hackensacker III (Rudy Vallee). When he discovers that she has been left without her belongings and has no clothing or possessions of any kind, he takes her shopping, and then leaves the train and sails her down to Palm Beach on his private yacht. The shopping scene is essentially consumer porn. We get an itemized list of everything he buys for her including a shit-ton of stockings. Keep in mind that this is 1942, and there's a war on.

It wouldn’t be a screwball if Tom wasn’t waiting for her. Gerry passes him off as her brother and tries to hook him up with J.D.’s sister, the five-time divorcee Princess Centimillia (Mary Astor). Eventually, everything happens for the best and director/co-screenwriter Preston Sturges brings out the deus ex machina clown hammer and gives us a triple wedding instead of the multiple homicides this film deserves.

This film fails for me on every level. It’s no fun to just leave it there, though, so let’s get into some dirty details. First, it’s evident from the start that Gerry is the type who gets what she wants by shaking a little leg at a guy. It’s how she gets the Wienie King to pay her rent, how she gets the drunks to buy her onto the train, and how she gets Hackensacker to buy half a department store for her, including a massive bracelet that looks like it should be worn around a champion wrestler’s waist. The problem here is (and I’m desperately trying not to be sexist in this statement), Claudette Colbert can’t pull this off. Oh, she’s not unattractive, but she’s also not all that and a bag of chips. I mean, if we’re going to sail full tilt into these repugnant waters because the script takes us there, it would be nice if the actress in the role could take us there. She can’t. The idea of it is ugly to begin with, but the sin is compounded by the fact that she simply doesn't have the look to be this greatly-desired ideal of womanhood.

The drunks on the train offer us a chance to see the racism of the time, too. A couple of them decide to start shooting off weapons in one of the train cars. To do this, they have their bartender throw crackers in the air as targets. Their bartender, as are most of the servants on the train, is black and he comes complete with the factory-installed “Oh, you sho is!” style of speech. Once things get out of hand, they start shooting at him and it’s funny because he’s black and so not really a person in the eyes of the film. Yes, that’s sarcasm. It’s not funny. It’s also not funny when the offending train car is detached and done so without rescuing this poor guy from the drunken assholes trying to kill him. This is compounded when Tom reaches the train and talks to another porter who tells him about Hackensacker and his “ya-chit.” Yes, he says it like that, the poor, ignorant stereotype.

Screw it. I’m spoiling this film. Eventually, Gerry and Tom come clean. It turns out that they met because they are both twins. Identical twins, in fact. So everyone gets a happy ending because Hackensacker and his sister just marry Gerry’s and Tom’s twins, because things like personality and all that don’t matter at all. Pass me the vomit bag.

The only positive thing I have to say about this film is that with its 88-minute running time, it only ruined an hour and a half of my life.

Why to watch The Palm Beach Story: Well, it could have been a lot longer.
Why not to watch: It offends on almost every level.