They Aren't Smuggling Crepes and Gruyere 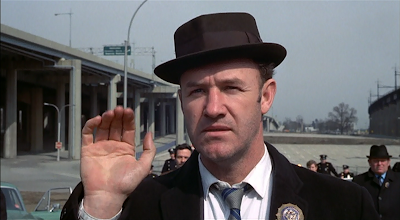 We all have those movies upon which we disagree with everyone else. I’m not talking about disliking a film like Citizen Kane; it’s become chic to hate on Welles’s classic with a certain type of film fan and/or blogger. No, I mean everyone has a couple of “everyone likes it” films that fit in a couple of other slots. First, there’s the “everyone likes it but me” film for those that gets universal praise…except for you. That’s Forrest Gump for me, and a few others I can think of. Then there are those films that just seem to wash over without leaving a solid impression. It’s not bad, per se, but you just can’t understand why everyone else loves it so much. In that category for me, first and foremost, is The French Connection.

It’s not a stretch to say that this is a widely loved and lauded film. It won a bunch of Oscars, including some of the biggies like Best Picture, Actor, Adapted Screenplay, and Director. I remember being excited the first time I saw it. And then…well… I shrug my shoulders. I simply don’t get it. I understand that it’s a good movie. I get that the action was innovative for the time. I understand that Gene Hackman was on top of his game. I just don’t understand why people seem to lose their shit over what seems to be a pretty standard cop drama. I feel alone in this, like I’m not in on the joke. This is a film that has been preserved as culturally important, one that’s still discussed. I don’t see anything here that’s so special, though. At least, what I see here I also saw in Bullitt from three or four years previous.

So I’m going to discuss this as best I can, but please feel free to comment and explain to me exactly what is so damn significant about The French Connection. Please help me to understand the cultural importance of this film, because I really don’t get it.

James “Popeye” Doyle (Gene Hackman) is a cop on the narcotics beat. He and his partner Buddy “Cloudy” Russo (Roy Scheider) make a quick bust and get the name of the junkie’s connection. This leads them into the drug smuggling underworld in which the majority of the heroin in the Americas is coming in through New York via France. This connection, a man named Charnier (Fernando Rey) uses a variety of methods to bring in the smack, the most interesting being inside the rocker panels of imported cars. We discover a lack of hard drugs on the streets, which means that the next shipment will have an entire city filled with eager, strung-out buyers.

Doyle and Russo are onto this, though, and start tailing Charnier, who soon realizes that he’s being followed. His second, a man named Nicoli (Marcel Bozzuffi), offers to bump off Doyle, which eventually leads to one of the stand-out scenes. Nicoli hijacks an elevated train, and Doyle commandeers a car, chasing the train through city streets. Eventually, the train is forced to stop and Doyle guns down Nicoli on the stairs up to the train platform.

There’s also some involvement from the Feds, who appear to function more or less as a way to keep tabs on Doyle and Russo. Eventually, the cops find the drugs but allow them to go back to the criminals so that they can bust everyone during the buy, and then all hell breaks loose and the film ends essentially while the firefight is still sort of going on.

I understand a few things here beyond this being a fairly straightforward (at least today) cop drama. Doyle’s character is the interesting one, and he’s interesting in a lot of ways because he’s a good cop who isn’t completely clean. He’s a racist, he’s violent, he’s angry, but he’s also a cop who gets bad guys off the street and is trying to do the job that he’s been paid to do. I get that. I also get just how groundbreaking the chase scene is, although as mentioned above, there are shades of Bullitt in this.

In other words, I see why The French Connection is a good film. What I don’t see is why it’s a great film. I’d be more than willing to watch it again using the good advice of someone else because I just don’t see it. In fact, I’ve talked to a number of people about this and have never really gotten a straight answer. More and more, it seems like people accept this as a great film because everyone else does. I’d like to understand why. If you know, please tell me.

Why to watch The French Connection: Cops who aren’t clean or dirty, but real.
Why not to watch: For a film that’s so important, it doesn’t seem very important.

Posted by SJHoneywell at 8:50 PM