I don’t like clowns. I don’t have the typical phobia of clowns that a lot of people have—I’m not scared of them; I just don’t like them. I’ve thought about it and I determined a few years ago that the reason I don’t like clowns is pretty simple. Clowns are crazy. They’re like socially approved crazy people who have license to do whatever they like at any moment. On those very rare occasions when I am approached by a clown, I don’t know how to react because I don’t know what’s going to happen. I could easily get smacked in the face with a fish or doused in confetti or kicked lightly in the ass. All I really know is that I don’t want any of those things to happen, so I want the clown to go away from me. 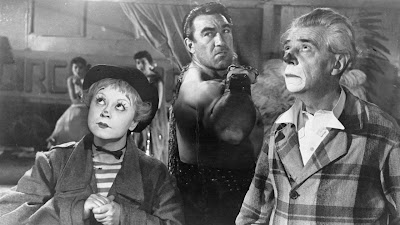 Fellini’s La Strada (The Road) takes place in a circus in no small part and features a number of clown-like characters, so it showed up with one strike against it. Fellini is a director I feel like I’m supposed to like, that if I don’t like one of his films, there’s something wrong with me rather than the movie. But…clowns and a circus. I watched it anyway, but this is a film I probably would have avoided forever had it not been on The List.

Gelsomina (Giulietta Masina) lives in poverty. Her sister had been sold by her mother to a man named Zampano (Anthony Quinn), who is a traveling performer. The sister has died, though, so the mother sells Gelsomina to him as well for the tidy sum of 10,000 lire. Off she goes with her new master. Zampano’s act is an odd one—he wraps a chain around himself and then breaks it with his chest muscles, and then passes the hat to earn his living. Gelsomina’s job is to drum up business—literally. She plays a trumpet and bangs a drum and performs little comedy skits in mime makeup.

Zampano, of course, is cruel, and needlessly so. Gelsomina is happy to be away from the crushing poverty of her home in exchange for the not-quite-as-crushing poverty on the road. She is a naïve and completely without guile or pretense. This doesn’t stop Zampano from treating her cruelly and beating her for even the smallest infraction or the tiniest misstep outside of his will.

Eventually, she rebels and runs away. While away from her cruel master, she encounters Il Matto (Richard Basehart), a clown and acrobat. She’s entranced with his performance, but is dragged away when Zampano finds her. Shortly after this, she and Zampano join a traveling circus that happens to employ Il Matto as well. Il Matto and Zampano do not get on well, mostly because the clown can’t help but make fun of the strongman at every opportunity, even heckling him a little bit during Zampano’s act. Naturally, this comes to blows and the two are briefly incarcerated. Il Matto is released first and tries to get Gelsomina to leave with him, but she refuses. Instead, she waits for Zampano outside the prison until he is released and they resume their life on the road.

Of course, they’re going to encounter Il Matto again, and of course it will get nasty and violent, an incident that sets up the third and final act of the film. Because La Strada is considered a classic, I won’t do it the injustice of spoiling it here, even under a spoiler tag. Suffice it to say that there’s tragedy aplenty in the final half hour.

This is one of those films that leaves me in something of a quandary. It’s an impossible film to dislike, even when I admit that Fellini is hit-or-miss for me (Satyricon was not a pleasant experience for me). It’s a classic story of innocence and evil that manages to avoid dropping into melodrama even though the story very much seems primed for it. Zampano is so purely nasty that he feels like a melodramatic victim, but he’s too much of a brute to be anything more than what he is. In his own way, he is as tragic as everyone else in the film.

But there is something incredibly off-putting about Gelsomina to me. She’s too much of a naïve character for me to take her terribly seriously. She doesn’t have the self-preservation skills of a brain damaged lemming, and seems to accept everything thrown at her with a goofy look and a head tilt like a puppy. The dubbing also leaves something to be desired. Richard Basehart has been dubbed by someone who has decided to inflict a manic giggle into virtually every line of dialogue.

So I’m torn. It’s a powerful story well told, but there is a part of me that holds it at arm’s length. I’m willing to be compelled by it, but simply find myself unable to be truly captivated by it. In their own ways, the characters are too flat, even when given small human touches. There’s too much attempting to capture a magic that isn’t there. Il Matto’s speech about the meaning of a small pebble, for instance, seems in many ways to be the moral heart of the film, but it seems to be so poorly thought through by the character that it elicited from me nothing more than a mental shrug.

I can’t fault the film for what it is. I can only fault my own particular likes and dislikes for not loving La Strada the way I feel I was supposed to. I blame it on the damn clowns.

Why to watch La Strada: It’s one of Fellini’s most important works.
Why not to watch: Clowns are made of evil.