A Second Note on the LAMMYs 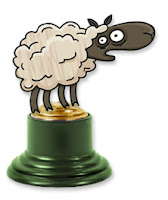 So it wasn’t a surprise to me that this happened. Five or six weeks ago, when it came time for the Large Association of Movie Blogs to host its annual awards, I backed out from participating. I didn’t put myself out in search of nominations and I didn’t complete a nomination ballot. I wanted nothing to do with it. This comes from a number of places both internal and external. I’m not a fan of unbridled competition, even for what is essentially a popularity award. I react badly to competition. All I ever ask for is a level playing field, and the field is never level. It results in hurt feelings and people getting upset.

I’ve spent the last half hour or so writing down what happened, but I’ve gotten rid of all that text. It’s not important in the specific, save to say that in several places, people have gotten their feelings hurt by either unclear nomination criteria or a joke that didn’t work as well as it should have. You can track the progress at several other places on the internet. Rather than rehash it, I’ve decided I can curb my apparent unquenchable desire to chronicle things just this once.

Anyway, as often happens with such things, what I feared came to pass and a lot of people are unaccountably upset by things. This is normally where I say something like, “I told you so.”

The inevitable crush of hurt feelings, though, is one reason I pulled myself out of contention at the start. I felt it was in my own best interests to distance myself from it. Another is that it conflicts with the reasons I blog in the first place. I don’t do this for acclaim. I do this more or less as a way to chronicle (there’s that word again) the journey I’m on. It’s for me. The fact that I’m getting multiple thousands of page views per month and comments on most posts is gratifying, but I was doing this for months when I got maybe 15 views a day, too. I still write this for myself more than anyone else. Stumping for other people to hand me a virtual trophy changes my intent and my purpose, and I didn’t want that.

Years ago, my first teaching job was at a self-defense/martial arts school. I liked it. I learned a lot about myself and learned a lot about self-control and self-discipline. One of my teachers there was big on martial arts competition and pushed as many of his students to compete as possible. He used to brag that he could get anyone to compete, which would make me his first failure in that realm. I didn’t compete. I never competed. I worked my ass off to learn the jo stick form and I near killed myself to master a particular move in our escrima form because I wanted to learn them. There was value in the knowledge of it, not because it would help me win a trophy. At the risk of sounding New Age here, my competition was daily and with myself to be better than I was the day before. It meant nothing to me to be better or worse at it than the guy standing next to me.

And really, I’m generally not better at it than the guy standing next to me. This is the largest of the reasons I backed out at the start. Of the 15 awards listed, I’d have liked a nomination for Best Podcast, because I’d have liked that for Nick. I think I qualify only for one of the other 14, and it’s one that should be eliminated anyway—Most Prolific. My reasoning for that is that there is an objective winner. There is someone who is more prolific than everyone else by some objective measure—most posts, most words posted—whatever. It’s like awarding “biggest land animal” to the rhino because elephants didn’t campaign hard enough. All of the other awards, popularity contest or not, are at least completely subjective. And in those subjective categories, I can easily and happily name multiple people who deserve a hell of a lot more praise and acclaim than I do. And equally important, many of those people will find that praise and acclaim far more meaningful than I would. I’m not trying to sound like an ass here despite how it comes out. It’s simply that my motivations are different. Not better, just different.

Anyway, it’s taken me close to 800 words to get to what needs to be said about all of this, the reason for this particular screed. I started blogging as a way to record my own personal growth on this front. I wanted a record of where I started and my first fumblings as a movie critic/reviewer and to see where I got by the end. I’ve taken on a number of projects in the meantime, expanded the scope of the blog recently, and gotten involved in things I couldn’t have predicted three years ago. I started podcasting. I’ve taken on a monthly feature at the Large Association of Movie Blogs. I did these things with a purpose in mind.

It wasn’t, despite what you might think, to figure out a way to make a living off this writing. I didn’t do it to create a fanbase or an army of sycophants. I did it to increase my exposure in the blogging community, yes, but for a specific reason. I like talking about movies with knowledgeable people. The more people who come here and comment, the more people I get to talk to about something I love. That’s the entire point of almost everything I do related to but outside the scope of this blog. I do it in the hope of bringing people here to start up a discussion. Agree with me, disagree with me, whatever. I just want to be a part of the dialogue, to hear what you have to say, to exchange opinions and thoughts on films, and hopefully enrich us all in some way. What I don’t want is to appear like some all-knowing guru on high doling out pearls of wisdom to the benighted masses.

The recent upheaval with the LAMMYs, though, is making me re-evaluate this. I have particular commitments that I will uphold, but I think this is evidence that I need to refocus myself and this blog in ways that are more beneficial to me personally and that are more in tune with my original goals. Things have gotten out of hand because too many people want to be the focus of the discussion rather than merely a part of it. There’s too much ego and too much of the sense of needing validation and not enough of the pure fucking joy of watching movies, writing about them, talking about them, and even respectfully disagreeing about them. It’s become, or started to become, a pantheon of personality where each person who is involved in the greater community has a specific persona that must be addressed. There are petty feuds and personality cults and constant dealings with egotism (and at times I suspect ergotism).

There’s no way around that. However, I can happily fill the role of the one person in the pantheon who gives up a place in it. Hestia did it; I can, too. There’s an old saying that if you aren’t a part of the solution, you’re a part of the problem. There’s a third option—I choose to remove myself from the situation entire. I can deal with politics and hurt feelings and infighting. I can also choose not to and to ignore all of it. It doesn’t improve my life to be a part of it.

This isn’t some pronouncement of superiority, by the way. I’m not proving myself a bigger, better, or wiser person by stepping back from this. I’m proving myself to be far more uncaring, unconcerned, and/or lazy. I’ll leave it to people who are more invested, care more, or want to act like adults far more than I do to sort out the mess. Dealing with it just makes me sad and tired. It’s entirely possible that the greater amateur movie blogging community will learn something from this and we’ll all benefit. It’s more likely that a patch will be slapped on and in a few months or a few years the pressure will build up again until it springs a leak, dousing everyone in the area with boiling water anew. In either case, I’m better off simply standing out of range. I garner less benefit of being a member of the community that way, but also risk far less mental and emotional damage.

There are comments about there being a lot of cliquishness involved in all of this. That may be true, and in fact is almost certainly true. Many of the people who come to this site and read what I have to say even once in a while come here because they've heard The Demented Podcast or the LAMBcast or they read Foreign Chops. Does that make me a part of the clique? I didn't ask to be. I just wanted people to talk with about movies.

In other words, most of us have behaved deplorably. There’s a lot of talk about being embarrassed to be a part of the Large Association of Movie Blogs, or being embarrassed about what has happened. We should be embarrassed—all of us should be. We’ve all let what should be a self-congratulatory party become a whining fest because not everyone gets a trophy. We're so far up our own asses that we’re ready to take everything as a slight. We’re ready to let old feuds boil out and what we’d shrug at from one person we’ll announce through a loudspeaker about someone else. I’m as guilty as everyone else on this. And yeah, I am embarrassed, but not to be a part of one group or another or one side or another. I’m embarrassed at my own behavior in this and my own inability to stop myself from getting caught up in it. I’m not any smarter than anyone else; I’m just one of the first to realize that I’ve acted stupidly and would like to move on from it.

I’m just one voice, and new voices appear daily. Some of those voices are worth listening to. My voice will still be around, but increasingly, it will be here and here alone, and in the grand scheme, not much will change. After all, nothing ever really does.

The sad truth is that the people I think really need to read this will not because they don’t come to my end of the movie blogging kiddie pool. The people who do get it and probably don’t need to read this are the ones who show up here anyway.

Posted by SJHoneywell at 1:34 PM

Email ThisBlogThis!Share to TwitterShare to FacebookShare to Pinterest
Labels: Awards