Devil with the Red Dress On 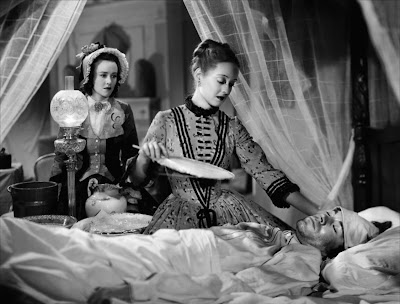 I understand the creation of characters like Miss Julie in Jezebel. This is a character that pops up frequently in movies. She’s in older films like Gone with the Wind or I Know Where I’m Going! and she’s not too different in many respects from the “manic pixie dream girl” so common in indie films of today. So I get the character, and I get why she exists. What I don’t get is why I’m ever supposed to root for her.

Miss Julie (Bette Davis) is a Southern belle, which means that in all situations, it is to her benefit to pretend to be weak and helpless so that men do things for her. She’s not much different in that respect, except that she frequently wants these men to do things that go against either the traditional code of conduct or the moral codes of the time. She’s manipulative and is so because she can be. Put bluntly, she’s the type of woman defined as “headstrong” by those with social graces, as a bitch by people without, and for people with nothing to lose as a word that begins with “c,” rhymes with “runt,” and doesn’t belong on this blog.

To define her as this character type, we need look no further than her actions in the film’s first act. Miss Julie is engaged to Pres Dillard (Henry Fonda), who works at a bank in New Orleans as one of the officers. He is working on high-level dealings, trying to get a railroad into the city despite the objections of the reactionary and calcified members of his board. However, he’s also promised Julie that he would go with her to pick out her dress for the Olympus Ball, the biggest social event of antebellum New Orleans. He’s unable to attend. In retaliation for not getting her way in all things, she opts for a red dress. That doesn’t sound like a big deal, but this is the old, genteel South when everything was decorum and manners. At the Olympus Ball, unmarried women only wear white. When Pres sees the dress, he balks, telling her that he will not take her unless she wears white.

Again, Julie isn’t getting her way, so she contacts Buck Cantrell (George Brent), a former suitor, asking him to take her. If the red dress wouldn’t cause a scandal, appearing on the arm of a former beau under the nose of her current fiancé would, but Buck is smart enough to demur. Eventually, Pres gives in and takes her because she insults his pride, claiming that the reason he won’t go with her in the red dress is because it would force him to defend her honor. At this point in the film, I was rightly peeved by this character. And then, well, everything gets good.

It’s at the Olympus Ball that the entire tone of the film changes dramatically. The red dress, it turns out, is a huge social faux pas. And here’s where I started to enjoy this—Pres makes her stay and forces her to dance in front of everyone in the scandalous dress. And then, he takes her home and takes his leave of her. And that means he leaves, as in goes north away from New Orleans, leaving Julie behind with a broken engagement. Oh, that’s what I wanted to see. It was at this point that I understood the point of view of this film. I wasn’t supposed to like Miss Julie. I was supposed to see her not as some untamed force of nature, wild and free, but as something out of control and destructive. Rather than asking me to like someone unlikeable, the film was asking me to witness her downfall, and I heartily approve.

Of course, this film is about much more than simple manners. That wouldn’t be enough to hold anyone’s attention for very long. Instead, this is a film about redemption. Once the terrible social gaffe has been committed, the rest of the film concerns what happens as a result of it, and for us to reach anything like catharsis, we must find a way for Julie to be redeemed. And thus we have an outbreak of yellow fever in New Orleans, the return of Pres, and the chance for Julie to act nobly in the face of the fact that Pres has committed his own unforgivable act in marrying a Yankee.

I’ll be the first to admit that this was a rough go for the first third or so, right up until the moment the tenor of the film changes at the Olympus Ball. At this moment, watching Henry Fonda and Bette Davis dancing alone on that ballroom floor with all of those angry eyes watching them I finally understood. We had to dislike Julie so that she could end up doing something admirable at the end. Without our initial dislike, the end would mean nothing because there would be nothing to redeem.

I will admit that there are lingering issues with this film. It exists in a world that doesn’t much appeal to me. I don’t have a great deal of interest in the Old South where failing to curtsey could result in social estrangement for a month or where, in this case, a red dress turns one into a pariah. I simply find it difficult to care about people who are concerned only with their clothing and their social standing. This ignores the late-‘30s film custom of filming a slave-owning society complete with “yas’m” manners and speech patterns. That irritates me, too, but is impossible to avoid in films of the time and genre.

In the final analysis, Jezebel is worth watching for the roles of Fonda and Davis. More importantly, it’s a film that manages to take a character type I dislike intently and makes it relevant and worth watching.

Why to watch Jezebel: Fine work from Wyler and Bette Davis before she became Bette Davis.
Why not to watch: It’s hard to spend time with Miss Julie.