No Bunnies were Harmed 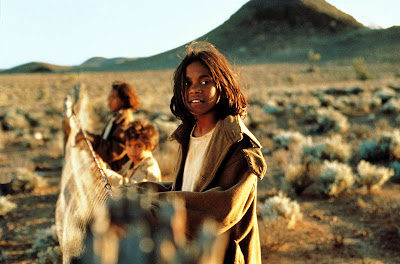 There’s a certain basic story that’s pretty much guaranteed to get people hooked. Put a couple of kids in a bad situation, have them fight for their lives and rights, and your audience will root for them no matter what. When you have the weight of history behind you, a true historical injustice done to an entire population and focus that injustice on children, your audience will not only root for the kids, but will be righteously indignant about it. That’s the basic formula of Rabbit-Proof Fence, and it works because of it, not in spite of it.

Rabbit-Proof Fence also works because we like to pretend that particular problems didn’t really happen in parts of the world that we seem akin to. For a Westerner like myself, this means pretty much anywhere that English is spoken and most of Western Europe. Human rights violations happen in third-world hellholes and banana republics, not in friendly places like Australia. It’s instructive, of course, to remember that institutionalized racism was the norm here pretty much within my lifetime, and that at Olympics in Sydney, there were not a few Aussies upset that the torch lighting was performed by an Aborigine. It’s naïve to pretend that such things never happened in the “civilized” world, but we also like to push those things back to a distant past and pretend that our parents and grandparents knew better. They didn’t.

There was a program in Australia for something like 50 years to essentially breed the aboriginal out of the Aborigine. While it appears to have come from the best of intentions, the result is a destruction of native culture and society still being felt today, a generation after the end of the program. Basically, the idea was to accept “half-caste” children, children of white and Aborigine parents, into white society. Like I said, best of intentions. The method of doing so, though, was to take these children forcibly from their parents and train them to be domestic servants.

Our story concerns three girls, Molly (Everlyn Sampi), Grace (Laura Monaghan), and Daisy (Tianna Sansbury). Molly and Grace are sisters; Grace is their cousin. The three girls are taken from their family and sent all the way across the continent to a school where they will learn to be proper little girls and will eventually make good, Christian servants. They are no longer allowed to speak their own language, and learn to perform menial tasks like laundry. The man running the school (Kenneth Branagh) appears to be a firm believer in the idea of tough love, of doing things for the Aborigines’ own good, damn what they want. In his philosophy, it makes sense that the children would rebel—laziness and idleness being akin to sin, after all.

After some time at the school, Molly decides that she has had enough and makes a break for it, knowing that the penalty for being caught is severe. She takes the other girls with her, even though Grace initially doesn’t want to go. Their goal is to find the rabbit-proof fence that bisects the continent. This 1,500-mile fence keeps rabbits on one side of Australia, allowing farmers to cultivate the other side without worrying about losing their crops. The girls know that their own home territory is near the fence in the north, so if they can find the fence and walk along it, eventually they will return home.

Pitted against them is all of the authority of Australia. Trackers are called in to find the girls, who walk hundreds of miles. Tricks—spreading the word that Grace’s mother is in a place reachable by train—are used to keep the girls off balance and to hopefully bring them in for easy capture. As they walk, the girls encounter a variety of people of all stripes and find that many of them sympathize with their plight. This sympathy comes from all quarters and not strictly from aboriginals, and not all whites prove to be enemies.

This really is the whole film. The girls walk north along the fence and look for food. Frequently Molly is forced to carry her younger sister. They do everything they can to throw off pursuit, walking on rocks instead of the ground, walking through streams and rivers when they present themselves. Through it all, no matter your opinion at the start of the film and no matter the intent of the program itself, seeing these girls walk across their continent to find their mother again becomes something of incredible importance.

In short, I was completely invested in their success or failure. I knew I was being manipulated to some extent and I didn’t care at all. Seeing these girls get home to their mother suddenly became as important to me as anything I’ve seen in a film in weeks. This is no doubt helped by the injustice being done to them and my natural desire to see them rise about it. It’s greatly aided as well by the excellent performances of these three child actors. Everlyn Sampi is a revelation, a young actor who is capable of displaying this almost insane level of determination and still selling it as completely believable and within character.

It also doesn’t hurt to have Branagh giving one of his better performances. He’s in the unenviable position as an actor of playing someone for whom most of the audience will have contempt, but who must project the idea of being so completely right in his own mind. Branagh manages this beautifully. He is easy to dislike, but also easy to understand; in his mind, what he is doing is legitimately for the good of the half-caste people. He sees it not as charity but as true Christianity, helping to raise them up by both breeding out their ancestry and by civilizing them to Western standards. He has to be contemptible for the audience, but absolutely—philosophically, morally and ideologically—convinced of his position in his own head, and he nails it.

Of course, what we want (and have come to expect) from films like this is a happy ending and no more racism from anyone ever. That’s sadly not the case. Rabbit-Proof Fence is based on a real story, and we get a chance to see the real-life Molly and Daisy at the end of the film. With institutionalized racism at such a level, it would be impossible for Molly and Daisy to live entirely free of it, and Grace’s fate was far sadder. It’s not the ending we’ve learned to want, but it is an ending that is sadly real.

As a final note, the soundtrack was wisely put in the hands of Peter Gabriel. Gabriel can’t do a soundtrack for a lot of films because of his particular style of music. However, for a film like this that takes place mainly in an untamed part of the world, a place of deep and ancient magic that seems much like the world as it appeared centuries before modern civilization, his reliance of ancient instruments and heavy rhythms is perfect, and a great complement to the film.

Why to watch Rabbit-Proof Fence: Struggle against the forces of racism and marginalization!
Why not to watch: The ending is real, and not what you want.