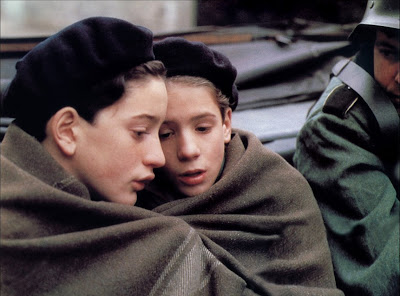 When I started this a couple of years ago, I didn’t realize exactly how much time I’d be spending between 1939 and 1945. I suppose this shouldn’t really surprise me, as World War II is the seminal event of the last century. It makes sense that it would dominate a percentage of our art, media, and thoughts. Much of what exists regarding World War II is told from memory, a way to exorcise demons. That is certainly the case with Louis Malle’s Au Revoir, les Enfants (Goodbye, Children).

Like many war stories, this one takes place from the point of view of children, who have always offered a particular perspective on war. At a certain point, kids understand what war is, even if they don’t understand why it is. The children in this film are boys at a Catholic boarding school, and many of them are able to understand not just that the war is happening, but that very bad things are happening as well.

Most of the focus is one two boys. Julien Quentin (Gaspard Manesse) is a bright kid, although he hates the separation the boarding school causes with his mother. As the new terms starts, he is introduced to Jean Bonnet (Raphael Fetjo), a student who appears to rival Julien academically. The two boys dislike each other at first, often antagonizing each other. Jean is private, often disturbingly so. Left alone one day in the dormitory, Julien makes an important discovery. Jean is actually named Jean Kippelstein, and is Jewish. This explains why his parents never visit him and why he never receives mail.

Julien, though, doesn’t really understand what it means to be Jewish, or why someone Jewish would be at a Catholic boarding school. It’s eident that at least some of the monks understand what is going on, and it’s implied that there may be other Jews on the grounds as a way of protecting them. The bad blood between the boys continues through a treasure hunt game. They are separated from their team, but Julien finds the prize and gets lost in the woods. The two are eventually dragged back to the school by German soldiers. Both boys end up sick, and Julien reveals that he knows Jean’s secret.

It’s not until a parents’ weekend that the boys truly ecome friends. They ditch air raid sirens with each other, confident that their teachers will not do a head count in the air raid shelter. Together, during air raids, they stand at a piano and hammer out rollicking jazz while the bombs fall.

Of course, with one character being Jewish and living in occupied Nazi territory, there aren’t a lot of different ways this film can end. For good or ill, the film ends realistically, which is rarely a good thing.

Malle’s perspective on World War II is not a unique one; there are plenty of films that show the war through the eyes of children or young adults in whole or in part. Many World War II films also show the war from the perspective of a friendship between two people thrust into this dark and dire situation, often with one or both being Jewish as an additional piece of tension. Similarly, many of these stories are based on reality or are at least in part memoirs. In these respects, Malle has done nothing particularly new.

Where Malle’s film succeeds is in focusing itself more on that budding friendship than on the war. Julien and Jean become friends not because they eluded the Nazis together or because of the war, but because they initially don’t like each other and fight. The tension between them eventually mutates into a bond they share, and there is every indication that this would have happened with these two boys regardless of the war. What I appreciate most about this film is that the boys are not learning how to shoot weapons or sneakily assassinate guards, but are simply boys in school during a terrible moment of human history. There is a sense of reality to this film, not of thrill and adventure. In short, they are boys who act like boys.

By focusing not on the war but on the friendship of the boys, the film gains in power and becomes more real. We, like the boys, become more concerned with the results of a piano lesson or what happens when the monks discover the kitchen boy is trading on the black market than we do with troop movements. In that sense, the film lulls us in. We see interactions with German soldiers, but these become just other events of the day. They are terrifying for the moment but quickly forgotten when reality—getting a throat swabbed or sneaking a banned book past the monks—becomes the order of business.

This is a poem to childhood lived during wartime. It is surprisingly powerful and beautiful, tragic and lyric and sad. This film is not quite my introduction to Louis Malle, but it is effectively so—the first I have seen in a very long time. I look forward to seeing much, much more.

Why to watch Au Revoir, les Enfants: Yet another way to view World War II
Why not to watch: The end is sadly inevitable.