Keep Your Hands to Yourself 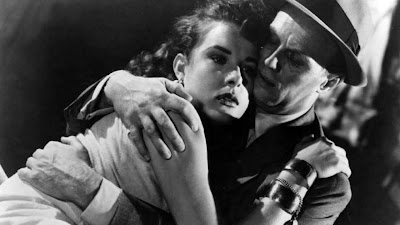 What happens to film noir when the primary focus of the world is the Cold War? What happens is that the directors and screenwriters creating the genre incorporate the situation of the wider world into their films. Sometimes, this results in a film that turns goofy like Kiss Me Deadly. Another possibility is Samuel Fuller’s Pickup on South Street, a film that follows most of the standard film noir conventions but puts a little Cold War twist on it by making the score everyone wants not a statue or a bank vault but a slender strip of microfilm.

We start film noir-y enough with crime. On a train, Skip McCoy (Richard Widmark) plies his trade as a skillful pickpocket just released from prison. Skip is a three-time loser, and another pinch will put him away for good. Still, it’s the only trade he knows and he’s as good as anyone at it. What he doesn’t count on is that in the purse of one of his victims he gets not cash but that strip of microfilm mentioned above. The courier, Candy (Jean Peters) is a patsy for her ex-boyfriend Joey (Richard Kiley) and doesn’t know what she’s carrying.

The authorities, though, are onto Candy, and Skip gets spotted. However, since these are federal authorities, Skip’s identity is unknown. The police manage to find him through the help of Moe Williams (Thelma Ritter) who sells ties as her legitimate job and sells information to the police for her main income. Moe’s one goal in life is to have a classy funeral and a burial plot somewhere other than a potter’s field. At one point, she utters the magnificent line, “If I was to be buried in Potter’s Field, it would just about kill me.”

Joey, knowing his communist bosses won’t accept a pickpocketing as an excuse for not having the plans, demands that Candy track the thief down and get them back. She also ends up at Moe’s and eventually makes it to Skip’s. She falls hard for him, but his interest is strictly in whatever cash he can get for the microfilm. He plays Candy for whatever information he can get. His goal is nothing more than a huge payday—after all, a communist’s money is as good as anyone else’s.

Things quickly go south, though, since everyone wants what he has. Candy wants it to get out from under her problems. The feds want it because the film is of secret plans, which is the same reason the commies want it. Moe, willing to sell out anyone for enough money to ensure her dream funeral, won’t sell anything to the communists. Eventually, it all comes to a head in a series of confrontations, which is what we pay our money for in the first place.

Pickup on South Street works specifically because of the characters and the actors playing them. Richard Widmark is capable of just the right amount of sudden violence, uncaring bravado, smooth cool, and nihilism to make the character work. Skip McCoy is reprehensible and repellent, but also cool enough that he’s worth rooting for. Jean Peters has the perfect look for her role in all of this. She comes across as pretty enough, but cheap. There’s a tawdriness to her, a desire for class that won’t and can’t be fulfilled. She (Candy, not Jean Peters) is dumb as a rock, but loyal, and used to her looks getting her just enough from guys who can’t walk on the right side of the law. Thelma Ritter is an all-but-forgotten actress, which is a shame. This is a woman nominated for six Oscars and no one knows who she is anymore, and she makes this role work perfectly. There’s just enough humor and just enough tragedy that we care about her despite her job as a stool pigeon.

I also feel a need to talk about the fight choreography. There are a couple of beatings in the film, two near the end in particular that are noteworthy. First, there is a fight between Candy and Joey that looks like the real thing. Candy gets tossed around the room and smashes into things, and it looks like she’s really getting the hell beaten out of her. Following this, Skip gets into it with Joey in one of the genuinely better-filmed fights I’ve ever seen. Fuller uses a high angle for a lot of the fight, and keeps both fighters in the frame most of the time. It’s great stunt work. In one moment, Joey tries to run away up a flight of stairs, but Skip grabs his ankle and drags him back, Joey’s head bouncing on every step. I watched that five times. It’s beautiful, and modern directors could take a page from what Fuller did here to good effect in current action titles.

If there’s a downside here, it’s that Fuller decided that defeating the communists was more important than sticking to a few important conventions of the genre. In short, we end up with a happy ending, and one that might actually go against the Hays Code, if not for the anti-communist resolution. And yet even here, Fuller goes against the prevailing mood of the time. When Skip finally does confront Joey, it’s not because he’s doing it for God and country, but because Joey beat up on Candy. He’s doing it for her, not to protect American secrets. In its own way, Pickup on South Street subverts the genre, but it also hedges that bet in the best way possible.

Why to watch Pickup on South Street: A great, compact story worth seeing.
Why not to watch: Film noir with a happy ending? Say it ain’t so!