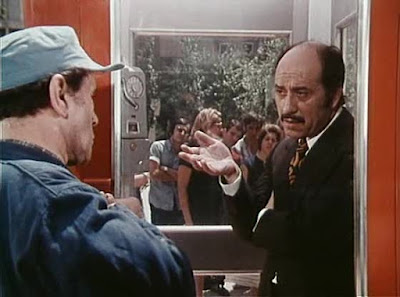 It feels like ages since I’ve actually written about a specific film at length. The few reviews I have posted recently are ones from an archive I created months ago, there to fill in gaps when I didn’t feel like I had much to say. Even then, it’s been difficult to motivate myself to post. I’m trying to correct that, working my way out of whatever malaise I’d fallen into about four months ago. It’s not even the writing that has felt like a chore to me; it’s all of the bookkeeping that accompanies it. Anyway, I figured a short film might be a good start in getting back to regular posting, so I tracked down La Cabina (The Telephone Box) on Vimeo and had a watch. It’s worth noting that this appears on YouTube as well, but without subtitles. If you speak Spanish, knock yourself out. Turns out there’s not a ton of dialogue, and even if you can’t understand what is being said, you’re not missing a great deal in terms of story.

A man (Jose Luis Lopez Vazquez) and his son (Antonio Moreno, I think) are walking to the bus. The boy’s soccer ball bounces into a phone booth and he retrieves it, then gets on the bus and rides away. The man, needing to make a call, enters the phone booth and discovers that, despite the fact that it’s new, the phone doesn’t work. The door closes behind him, locking him in.

The next part of the film consists of the man attempting to get out of the box. A number of people—a strong man, a worker with tools, police officers—attempt to help him while a crowd gathers. The crowd appears to be equal parts amused and concerned regarding the man in the booth. Eventually, what appears to be the workers who set up the booth arrive, and rather than freeing the man, load the entire booth onto the back of a truck and drive it away.

I’m going to stop with the plot summary here. This takes us about halfway through this short (roughly 36 minutes) film, and where it goes from here is something best left unspoiled. There’s a fair chance that you’ll guess where this is going, but even with that possibility, I’m going to put something under a spoiler tag below. There’s a connection to another movie here that makes the ultimate point of the film obvious, and I’d rather not give that away overtly.

It is worth noting that La Cabina seems to have inspired a film like Phone Booth in at least some respects. It’s a far better film than the latter one. It’s tighter, more interesting, and better acted if nothing else. Truthfully, the only thing they really share is a man trapped in a phone booth drawing a crowd, but it’s hard to think that this didn’t have some real influence.

La Cabina was made for Spanish television in the early 1970s, and that leads me to another thought here. Based on the ultimate plot of the film and where things go in the last couple of minutes, it feels almost impossible that this was not a comment about the Franco government in at least some respects. It constantly amazes me just how far some artists are willing to push things against a repressive government. Franco’s fascist Spain can only be considered as one of the more brutal regimes in the post-World War II European era, it it’s not difficult to draw a line from the conclusion here to some of Franco’s policies. That takes a great deal of guts, and, even if I didn’t like the film (I did), I’d have to respect writer/screenplay co-author/director Antonio Mercero.

So let’s talk about that spoiler.

While a film like Phone Booth has some surface similarity to La Cabina, the film that really seems to take its cues from this one is Cube. At the end of the film, our man in the booth is dropped off in what is essentially a massive warehouse filled with these booths, all of which have the desiccated corpses of occupants who, like our main character, had the misfortune of entering the wrong phone booth. There’s a sense of a larger form of oppression here beyond what we see, a systematic dehumanizing not for any evident purpose, but simply because it can be done. This is part and parcel of why La Cabina feels like a critique of Franco’s fascist government. This is death, torture, and humiliation for the sake of it. It happens because it can, and the cruelty is the point. The final moments of a new phone booth/execution chamber being set up in a public place indicates that the killing will continue. Why? Because it can. It’s not coincidental that this still feels relevant.

For a short film, La Cabina builds slowly but well. It starts out as a mere annoyance, almost a piece of slapstick that gradually becomes more sinister and diabolical. The short run time makes it an easy investment, and the final few minutes make it something memorable and worth the time.

Why to watch La Cabina: It feels like relevant commentary.
Why not to watch: No good reason—even if you hate it, it’s a very small commitment.