Ten Days of Terror!: The Plague of the Zombies

Films: The Plague of the Zombies
Format: Turner Classic Movies on rockin’ flatscreen. 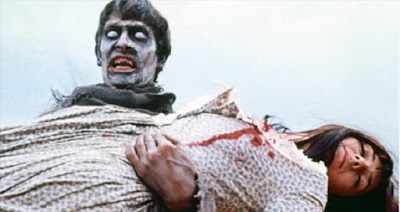 There’s something rather charming about Hammer horror films. They tended to go for that Gothic feel, meaning that the horror is much more along those classic lines and probably isn’t going to be really scary. It’s all about that Victorian feel, putting a damsel or two in distress, killing off a few people, and eventually getting rid of the monster or monsters by the end. What makes The Plague of the Zombies particularly interesting to me is that this was released a couple of years before Night of the Living Dead. That means that this may well be the last movie made before “zombie” became synonymous with flesh-eating ghouls.

What that means is that with The Plague of the Zombies we’re going to get actors playing 19th century dress-up, “scares” that aren’t that scary, and emphasis on story, which makes it kind of refreshing. That the story is kind of nonsensical is kind of beside the point here—it really is focused much more on the story than on anything like gore. Once again, it strikes me just how different this movie is from Night of the Living Dead despite a mere two-year difference.

Anyway, Dr. James Forbes (Andre Morell) receives a letter from a former student, Dr. Peter Tompson (Brook Williams). It seems that Dr. Tompson has had a series of sudden, mysterious deaths in the small Cornish village where he now lives and works. Sir James wants nothing to do with this, but his daughter Sylvia (Diane Clare) convinces him to go to his student anyway, in part because she is friends with Tompson’s wife Alice (Jacqueline Pearce).

So, off we go to Cornwall where we’re going to find out that the deaths are certainly happening and the locals, desperate and terrified, have started blaming Dr. Tompson, having no one else to accuse. Of course, it’s much more serious than that—the movie is called the Plague of the Zombies, after all. It’s also not going to be that shy about handing us the plot—there are no real surprises here. The local rich guy/lord is Squire Clive Hamilton (John Carson), who spent years abroad, specifically in the Caribbean, and more specifically in Haiti (pronounced “Hi-EE-tee” by everyone in the film). Also, the deaths seem to have started happening around the time Squire Hamilton and his friends showed back up. Oh, and there’s a tin mine in the area that has apparently been shut down, but the squire and is friends are inexplicably flush with cash.

Like I said, there’s not a lot of guesswork needed to understand the plot here. Everything is pretty much going to be handed to you a good 15-20 minutes before it’s “revealed” on screen. And in what seems to be a unique bit of gender equality, Squire Hamilton has no problem killing off women to work in the mines. Given that there are two named women in this movie and Sylvia is clearly our main character, it shouldn’t be that hard to guess what happens to Alice.

What I find really interesting here is how much it feels like Romero may have picked up a few ideas from this film while taking the idea of “zombie” in a very different direction. Our zombies, for instance, while not flesh eating, seem to have the same blue-grey skin tone that Romero used in several of his films. In one really fun sequence, we watch a recently killed person reanimate, with the face slowly changing color until…the eyes open dramatically! I mean, I knew the eyes were going to open, but it was still pretty fun.

It’s hard not to like The Plague of the Zombies at times because of rather than in spite of its failings and amateurish moments. Our zombies have the grey face makeup, but no one seems to have realized that their arms and hands might need the same treatment. In plenty of close-ups, we can see that the zombie cosmetics have been inconsistently applied, and there’s plenty of Caucasian skin tone peeking out around the eyes, lips, and hairline. It’s almost cute—they’re making a zombie movie just like the grown-ups.

So, while aspects of this are purely professional and other aspects are wonderfully amateurish, there are some parts that just don’t make any sense. First, how many zombies do you need to operate a mine, anyway? Evidently lots, because when we do get to the mine sequences, there are plenty of zombies just standing around. They’re not quite guards and certainly not working. They’re like…ambiance. Squire Hamilton evidently brought a troupe of drummers back with him from Haiti; these guys also seem to spend literally all of their time in the mine, hanging around until their boss decides its ritual time and they can start wailing away. It does leave open the question of what they do with the rest of their time. The biggest head scratcher is that on multiple occasions, we see one of Hamilton’s friends whipping a zombie minion. If the zombies are undead, unfeeling automatons…is whipping them just for effect? Some sort of bizarre sexual fetish? An alternative to beating up someone at the local pub? It would be like beating on a tractor or a wheelbarrow. Sure, it might satisfy in the moment, but long-term, it’s not going to be doing a lot of good.

I kind of liked this because it’s so weird. It doesn’t make a lot of sense, but it really, really wants to, and for that, I have to give it at least a little respect.

Why to watch The Plague of the Zombies: It has that classic Hammer horror feel to it.
Why not to watch: Some of it does not make any sense.

Email ThisBlogThis!Share to TwitterShare to FacebookShare to Pinterest
Labels: horror, John Gilling, The Plague of the Zombies