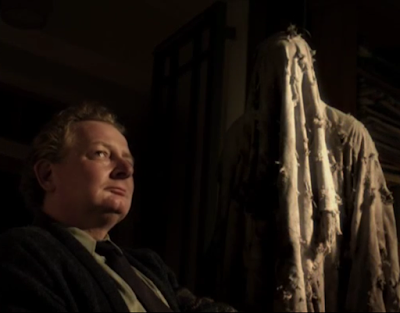 I’ve been on a bit of a horror/comedy kick lately, which is odd in a way. There are a number or horror comedies that I like, but I think it’s not an easy genre mix to do well. More often than not, a lot of these movies still want to keep a foot in the horror genre, which means the comedy doesn’t really come through. Housebound is one that I remember liking the first time I saw it. On a rewatch, I liked it more. It has a great mix of horror and comedy, and a big part of this comes from the fact that it doesn’t sell the horror short at all.

Kylie Bucknell (Morgana O’Reilly) is, in the parlance, troubled. As the film opens, she and an accomplice attempt to rob an ATM, but the accomplice knocks himself unconscious. In attempting to get away with the money and he friend, Kylie ends up caught. Because of her history, she is sentenced to eight months of house arrest under the eye of her mother Miriam (Rima Te Wiata) and her step-father Graeme (Ross Harper). Kylie isn’t too pleased with this arrangement. She has a great deal of resentment stored up for her mother and nothing really to say about Graeme other than that they have nothing really in common.

Kylie is frustrated by her new life and the presence of the ankle monitor, but is much more upset when she hears her mother calling into a local radio show talking about how she believes her house is haunted. Kylie becomes slightly more amenable to her mother’s opinion when, while in the basement, she is grabbed by what looks like a disembodied hand. This coincides with what appears to be tampering of her monitor. Amos (Glen-Paul Waru), who works for the security company and lives in her neighborhood, shows up and, it turns out, is an amateur ghost hunter.

What throws a wrench into this is Dennis (Cameron Rhodes), the clinical psychologist working the case who is convinced that both Kylie and Miriam are delusional. Amos starts to feel the same way until Graeme tells Kylie that the house was once a halfway house and the site of a gruesome murder years before. Suspicion falls on hoarder neighbor Kraglund (Mick Innes), who may actually have the key to what is really happening in the house.

As I said above, I enjoyed Housebound the first time I watched it. On this rewatch, I realized just how effective this film really is. What I remembered, more or less, was the ending and the source of the hauntings in the house. I remembered some of the comedy moments. What I forgot was just how effective the horror moments in this film truly are. They are solid top to bottom, some truly quality scare moments, and not all of them rely entirely on jump scares (although a few of them do).

Housebound does a lot of things really well. One of those things is giving us characters that work really well. Kylie is a difficult character to like, at least initially. She’s rude and angry, sort of an anthropomorphic eye roll. And yet, she’s compelling because of this. Amos is another good example. It would be really easy to make Amos a completely comic character, but the film hasn’t done this. He is comic, but he’s also competent at his job. Rather than being someone who is funny because he is ridiculous, he’s merely funny because of who he is. Amos is smart, but a little off rather than being a caricature. That’s good writing.

The other thing that I really like about Housebound is that it doesn’t forget what it wants to be. This is a movie that wants to be both a horror movie and a comedy, and it pays homage to both. The comedy moments happen as a natural progression of the story, not something that replaces the horror or gets in the way of it. The comedy feels very natural in this respect, and not forced at all. At the same time, the horror works for much the same reason. It’s not there to replace to comedy but to work with it.

New Zealand is home to some interesting films. Housebound is one of the better ones, and it’s really worth tracking down.

Why to watch Housebound: It doesn’t sell out the horror for the comedy.
Why not to watch: No good reason—it’s a lot of fun.