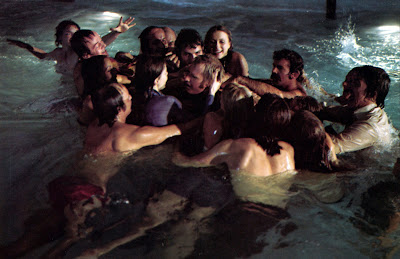 I have seen a surprising number of David Cronenberg’s films without really going out of my way to see them. This isn’t to say that I’ve specifically avoided his work; I haven’t. I like Cronenberg quite a bit, and I especially like where his career seems to have gone in the last decade, still making disturbing movies without making them explicitly horrific. That’s not where we are going with Shivers, which I think is his first feature-length film. It’s at most his second, and it predates all of those films for which he became famous.

It’s important for me to remember that Shivers came before films like Rabid and The Brood, since it’s going to cover a lot of the same territory. The problem, and it’s reason I need to keep that in mind, is that the territory we’re going to cover is generally covered better in Cronenberg’s other films. That’s to be expected. This was early in his career, after all, and there’s evidence of the director he’d become in this early, weird movie.

There’s not a lot of plot here. Essentially, a doctor has decided that humanity has gotten too far away from its roots, specifically in terms of its physical nature. Even more specifically, he thinks people have become too rational and have lost touch with the idea of sex. So, to combat this, he more or less creates a new parasite that will cause people to become sex maniacs. Of course, we don’t find this out right away. What we see right away is an old guy killing a young woman and then himself. We find out later that this is the guy who created the parasite and that he infected the girl with it, who then infected other people in her building.

It’s important to note that the building that we are discussing exists on an island in Montreal. It’s essentially an arcology, a self-contained habitat. The person taking us through what is going to be the start of a mass infection is the complex’s doctor, Roger St. Luc (Paul Hampton) and his assistant/girlfriend Nurse Forsythe (Lynn Lowry, and yes, this is how she is listed). Dr. St. Luc will find out about the sex parasite from Rollo Linksy (Joe Silver), who worked with the doctor who created it. St. Luc also has a number of patients with large, inexplicable abdominal distensions, which are (of course) the parasite in question.

Really, though, what we’re looking for is the sex part of this, and it does eventually sort of happen. We also get a moment here that seems to be a go-to for horror movies to reference. One of the apartment residents (played by Barbara Steele) is attacked by a parasite while in the bathtub, a moment that is later referenced almost directly in A Nightmare on Elm Street and Slither at the very least. Eventually, pretty much everyone in the building becomes infected by the parasite, which more or less leads to a mass orgy that centers on the complex’s swimming pool.

What I find interesting here is not the execution (which isn’t great) but some of the ideas. There are some that are horribly disturbing. There are, for instance, more than hints of pederasty, child sexual abuse, and incest as the infestation spreads. All of that is disturbing and awful, and not in a good way. But there are other things here that seem, while not particularly prescient, at least ahead of the curve in where some media goes. The building, for instance, as well as the mass orgy, seems to presage stories like High Rise by J.G. Ballard. Cronenberg’s infected apartment dwellers are essentially Romero-style zombies, except that they’re still alive. But any acts performed by them appear to be equally likely to be sexual, violent, or both. This also seems to presage Ballard’s book or be taken from it. Actually, since both the film and the book are from 1975, it may simply be an idea whose time had come.

Why to watch Shivers: Even when he’s low-budget, Cronenberg is interesting.
Why not to watch: It’s purely amateur.