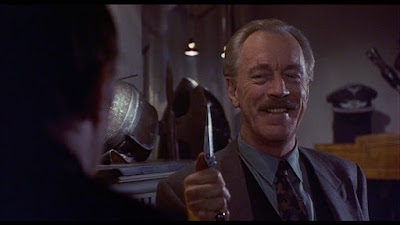 Say what you will about Stephen King, but he’s certainly varied in the sorts of horrors that he concocts. There was a time when I read a great deal of Stephen King. In fact, there were a good many years when one of my sisters, one of my brothers, and I traded King’s books among ourselves. And, naturally, a lot of those books were turned into movies. Needful Things is an odd one both in terms of the story and the movie. This is a film with a surprising cast, for instance. It’s also perhaps King’s most aggressively mean-spirited story.

I don’t mean that as a positive or negative judgment; I mean that as a simple fact. There are plenty of King’s books that involve terrible violence, pain, bloodshed, and even torture. The hobbling scene from Misery is one of the few movie scenes I’ve never been able to watch a second time. And yet Needful Things is spiteful and belligerent. There are plenty of movies that go for the audience’s jugular by killing off a friendly family pet, for instance. In Needful Things, we’re not going to get a family pet killed. We’re going to get a family pet killed and then skinned. And all of this is going to be done by average people, not by monsters.

Needful Things features the closest thing King has to a protagonist in multiple stories that isn’t specifically a series. This is because Needful Things takes place in the fictional Castle Rock, Maine, a town that shows up in a number of his stories. Sheriff Alan Pangborn (Ed Harris) is more or less the hero here, and also features prominently in The Dark Half, The Sun Dog, and is mentioned in a few other stories. Needful Things has a lot of characters in it, and Pangborn is as much of a protagonist as we’ll get simply by virtue of the fact that he’s one of the few characters who doesn’t get sucked into the trouble willingly.

The way Needful Things works is that the town of Castle Rock has been awaiting the opening of a new store called Needful Things. The guess of most people is that it will probably be some sort of antique store. It’s run by a man named Leland Gaunt (Max von Sydow), who opens the store more or less when he sees someone come by who he wants to sell something to. The conceit of the film is that Gaunt is something like a demon. What he does is somehow have the very thing that someone wants, the one, well, “needful thing” that the person desperately desires. It might be something they never had or something that was lost. And, regardless of that thing’s actual value, Gaunt sells it for a pittance as well as the requirement to perform “pranks” at his behest.

These pranks, of course, are mean, not so much pranks as they are outright crimes in a number of cases. What soon becomes apparent is that Castle Rock is a town where emotions run high. There are plenty of people who hate each other for one reason or another. The local priest (William Sheppard) and the local Baptist minister (Ron S. Davis) hate each other passionately. Head selectman Danforth Keeton (J.T. Walsh), who happens to be embezzling town funds to bet on horse races has a massive feud with Deputy Norris Ridgewick (Ray McKinnon) since Ridgewick frequently tickets him for parking in the handicapped spot downtown. And Gaunt’s evil genius is to exacerbate these rivalries as much as possible by having pranks played on both parties by other people. And, since people are also obsessed with the item they have received from Leland Gaunt, everyone’s paranoia is ramped up and tempers flare into murderousness very quickly.

And that’s what I mean about Needful Things being aggressively mean-spirited. These “pranks” that Gaunt forces people to perform include killing and skinning a dog, smashing all of someone’s windows with a bushel of apples, slitting someone’s tires, and more. Murder happens throughout the town, and eventually explosions follow. I remember a great deal of this from the book. In fact, the book was a great deal more complex in this regard, included more people and many more dark secrets, and also included an appearance from Ace Merrill, the character played by Kiefer Sutherland in Stand by Me.

For all of this, and for as nasty as Needful Things gets, it punks out the ending completely. The ending in the book is vicious and just as mean as the rest of the story in many ways. Here, there’s something akin to a “come to Jesus” moment and a bit of future prediction that seems to deny the free will that the rest of the film indicates that people have. For as brutal as things get, the movie cops out entirely and it’s really disappointing.

I really want to like this film, and I do up until the final 15 minutes or so. It’s too bad, too, because the lousy ending pulls down what would otherwise be a very effective, if nasty horror film. And again, that cast—in addition to Max von Sydow, J.T. Walsh, and Ed Harris, we get Bonnie Bedelia and Amanda Plummer. Now if only the ending could live up to that cast.

Why to watch Needful Things: In many ways, Stephen King’s most vicious story.
Why not to watch: It shits the bed on the ending.