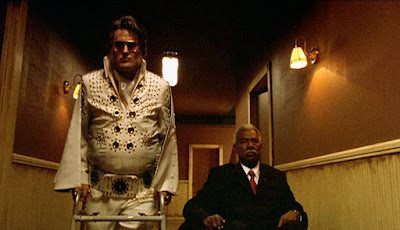 I’m not sure what coherent can be said about the films of Don Coscarelli except that they are consistently bizarre in the extreme. Bubba Ho-Tep, a film that features Elvis Presley playing the part of an Elvis impersonator with penile cancer, JFK as a black man with sand replacing part of his brain, and a cowboy boot-wearing mummy, certainly fits his oeuvre. This is the guy who made the Phantasm series, Beastmaster, and John Dies at the End after all, so Elvis in an East Texas nursing home is par for the course.

And yes, this is exactly where we are going here. Sebastian Haff (Bruce Campbell) is actually Elvis Presley, and he lives in an East Texas nursing home more or less waiting for death to overcome him. He reveals eventually how the King of Rock and Roll came to this sorry state. Desperate to get out of the life that fame has created for him, Elvis tracked down a successful impersonator named Sebastian Haff. The two sign an agreement. Haff becomes Elvis and Elvis becomes Haff, an arrangement that Elvis can switch back whenever he wants. Sadly for him, he loses his copy of the contract in a trailer explosion, and then Haff-as-Elvis dies. The real Elvis, still performing as Haff, falls off stage during a concert and breaks his hip, and he winds up in a coma, which eventually puts him in the Shady Rest Retirement Home.

As might be expected, the Shady Rest has a pretty high body count, since all of the residents are quite old. It’s when Elvis is attacked by a strange beetle-like creature that he decides to start figuring out why people seem to be dying just about every night. Enlisted in his cause is Jack Kennedy (Ossie Davis), a man convinced that he is actually JFK. According to him, after the assassination attempt, the missing part of his brain was replaced by sand and he was dyed black so that no one would find him. Jack discovers some Egyptian hieroglyphics in the bathroom, and using a book he has in his room and his own eyewitness, he determines that the nursing home is being attacked by a mummy that has somehow come back to life in East Texas.

What they also determine is that this mummy (Bob Ivy), who Elvis dubs Bubba Ho-Tep, is surviving by consuming the souls of the Shady Rest residents. Jack’s theory about the hieroglyphics is that the mummy, needing to relieve himself and like most people wanting a clean place to do so, scrawled the words on the wall. What this means is that when he consumes a soul, there is some sort of waste product at the end. Not wanting to end up decorating the toilets, Elvis and Jack decide to fight back as best they can.

I would love to say that the best thing about Bubba Ho-Tep is the story, but that’s simply not the case. This doesn’t mean that the story is a problem; we’ll get to that soon enough. No, the best parts of Bubba Ho-Tep are the twin performances of Bruch Campbell and Ossie Davis. Roger Ebert had a film rule that any movie that featured either M. Emmett Walsh or Harry Dean Stanton couldn’t be all bad. I can’t quite say the same thing about Campbell, but I think I can come close, and I think the same could be said for Davis. Both of them buy in completely to their roles. It’s never made clear whether or not they are who they claim to be. It’s hinted that Elvis may be the real deal and Jack probably isn’t, but it doesn’t matter. No matter if they are correct or delusional, it’s clear in both performances that these characters believe they are who they claim to be, such is the force of their performance.

But hey, we can’t really ignore the story, can we? The story of Bubba Ho-Tep is a selling point here, but there are times when it feels to me like it doesn’t quite go far enough. This is a function not of the screenplay or of the people involved, but of the relatively miniscule budget that the film was saddled with. Give this thing ten times or even five times its million-dollar budget and we’d get some better effects, a deeper story, and perhaps the character allegedly in the original story (a sex-changed John Dillinger, for the record).

It’s hard to dislike Bubba Ho-Tep, though. It’s the sort of film that is very much the sum of its parts and while it suffers in some respects from its limitations, it’s also a film that is successful in part because of them. It’s charming in its peculiar, oddball way.

Why to watch Bubba Ho-Tep: Bruce Campbell makes anything better and Ossie Davis makes everything better.
Why not to watch: I’d like more of the mummy.