Film: 30 Days of Night
Format: Starz via On Demand on big ol’ television. 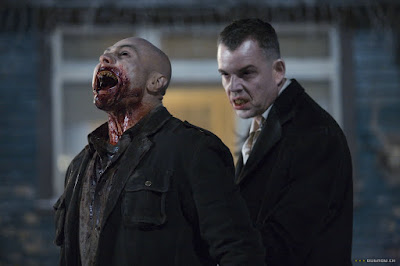 Typically, I watch a movie and write up the review the same day or the next day. That’s true even in cases where I might wait months (or even longer) to actually post the review. In the case of 30 Days of Night, I have been waiting days to actually write this up. I’d seen this before, so I knew what to expect going in. What that means in this case is that I knew exactly where and how I’d be disappointed. I so desperately want to like this movie and I just can’t.

So here’s the deal: 30 Days of Night has a tremendously good premise and a great take on vampires and it screws the pooch by having the stupidest execution possible. The movie it reminds me of the most in this respect is Snowpiercer. So many people love Snowpiercer, but when I look at it, I can’t get behind just how dumb the execution actually is. It’s a film where the premise makes so little sense that it actually makes me mad. 30 Days of Night has a great premise, but how this is actually revealed in the film is so head-bashingly dumb that I just get frustrated and lose focus. Because of that, I haven’t wanted to write about it.

So let’s talk about that awesome premise. The film’s basic idea is that Barrow, Alaska, which sits at the very top of the state, experiences about 30 days without the sun coming up. There’s a final flight out of town and then everything shuts down for the month until the sun returns. In this case, as the town prepares to go through its yearly period of darkness, a stranger (Ben Foster) wanders into town and destroys Barrow’s ability to communicate with the outside world and to leave the town. This is because Barrow is about to be invaded by vampires who, because the sun will not be around for a month, will have 30 days to terrorize, hunt, and kill every resident of the town. Standing in their way is local sheriff Eben Oleson (Josh Hartnett) and his estranged wife Stella (Melissa George) as well as the other townsfolk.

Again, it’s a great idea. And I love the idea of the vampires in this film. They are feral and brutal, vaguely human in appearance but monstrous and bestial at the same time. Once they start feeding, they are constantly covered in blood.

…And that’s all we’ve got right here. The vampire more or less kill off a huge percentage of the town almost immediately, which means they’re not going to have a great deal of food left for the rest of the month. Our slowly dwindling gang of survivors hole up in various places around the town and try not to be seen. And once again, this is terribly problematic for me. They spend time in an attic, and they’re evidently there for a few days, not leaving, but also not commenting on the fact that the attic would need to have some spot for them to relieve themselves. They also don’t appear to have food or water, which is why eventually they all move to the general store, where they spend days. Days. In a place with windows all around, and where they will almost certainly be making noise and doing things like flushing the toilet. They’re also evidently doing things like shaving, because by the time we’re near the end of the ordeal, Sheriff Eben has maybe a week’s worth of beard.

The movie is called 30 Days of Night, but it’s a lot more like Four Days of Night or A Hard Day of Night. The time simply doesn’t work here for what we’re supposed to get, and the vampires, while being evidently hugely successful alpha predators, are so dumb that they can’t find loud, clumsy prey who aren’t really trying that hard to not be seen. Just about everyone in this film is dumb, and that sadly goes for actors who I normally like, like Mark Boone Junior.

And so, while there are definitely aspects of 30 Days of Night that I genuinely enjoy, overall, I find the movie a complete disappointment. There’s so much that should make this a premiere vampire film and a truly great horror movie. Instead, there are so many problems that I just can’t get past. I’m happy to suspend disbelief to have a movie with vampires. I’m happy to suspend disbelief for any good story that is internally consistent. 30 Days of Night isn’t. It sets up a premise and then, to get the story it wants to tell, it breaks every one of its own damn rules. Such a shame.

Why to watch 30 Days of Night: An awesome premise.
Why not to watch: Stupid execution.