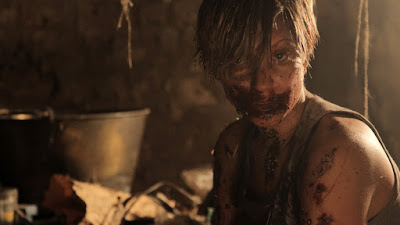 Sometimes I don’t know how to start a review. In the case of Lovely Molly, the problem is that I don’t know where to start. There’s absolutely a story here and an atmosphere of strangeness and dread. The problem is that I’m not sure I understand the entire story. It’s an interesting set of choices that come together in Lovely Molly that make the film slightly more realistic in a certain sense, but also more frustrating. We’ll get to that before the end, I promise.

Most of the film is going to be told in flashback. It opens with the titular Molly (Gretchen Lodge) talking to us on a video camera. She’s desperately trying to kill herself, but tells the camera that she is being prevented. We’re not quite going to get back to this point, but we’ll get close to it through the rest of the film. We are going to go back to the beginning of the tale, though, when Molly doesn’t look quite so feral.

So here’s what we need to know. Molly has recently married Tim (Johnny Lewis, in one of his last films). The two have moved into the house where she grew up despite her having a number of difficult memories of the house. This is going to come back to us pretty quickly, as Molly starts acting in strange ways, especially when Tim, who is a truck driver, is not around. Strange events start taking place, like the house alarm going off for no evident reason. One day, when Tim returns from a trip, he finds Molly sitting naked in the spare bedroom saying that “He is still alive.”

So it’s around this time that we discover Molly is a former heroin addict and that her process of getting clean was arduous to say the least. Her sister Hannah (Alexandra Holden) attempts to help and wants Molly out of the house, but Molly won’t go. And things get stranger and stranger. It’s soon evident that Molly is seeing someone who isn’t there, or at least who isn’t evident to everyone else. There’s also some evidence that she is being attacked in some way by things that only she can see. When her sister finds her in the basement with the carcass of a deer, things start to get a lot more disturbing.

I’m going to stop with the basic summary there. The reason for that is that I’m not entirely sure what the hell happens in Lovely Molly or if I’m actually supposed to know. It’s an interesting choice, making the entire point of the film completely opaque to the audience, but that’s absolutely the situation with this film. Nothing is really explained. It’s hinted at who the attacker is, but much of it is not even partially explained.

I get it. I even respect the decision. In one sense, it makes the whole thing a little more real world. I mean, things happen in the real world all the time and are never explained to anyone. Things happen for reasons that we don’t understand. This is absolutely the case with Lovely Molly, and in that sense, it’s completely believable. Scary things happen. We get some inkling as to what it is, but no clear reason why any of it is happening. It’s disturbing and weird, and eventually the movie ends. That’s realistic.

But it’s also really frustrating. Movies, even when we expect them to be realistic have something like a social contract with us to make sense. We expect a certain amount of closure or at least explanation for what is going on. We want things to make sense at the end, even if it’s not something that could ever happen. The expectation is that we’ll understand what the hell happened when the final credits roll.

What we end up with, then, is a film that goes a long way toward creating a disturbing and creepy atmosphere. Some really weird and strange things happen, some of which is really upsetting. But when we get to the end of the film we have a series of events that are not even remotely explained. Because of that, it ends up being a pretty disturbing movie, but one that loses a lot of its power to scare because we don’t really understand why it happens. Sometimes that can really work. In the case of Lovely Molly, it doesn’t work that well.

Why to watch Lovely Molly: It’s definitely succeeding in creating a disturbing mood.
Why not to watch: It’s almost completely unexplained.