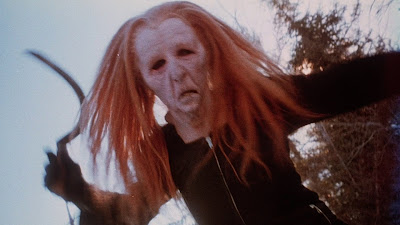 There are specific rules for slasher movies, or at least specific things that we expect from them as members of the audience. One of them is that we expect there to be actual slasher deaths within the context of the film. In this respect, Curtains has some real issues with calling itself a slasher. This is probably the most bloodless “slasher” movie I’ve ever seen. I mean I’ve taken a stance against gore for the sake of gore plenty of times in the past, but this is ridiculous.

It starts out well, too. We’re given a director named Jonathan Stryker (John Vernon) and his frequent muse Samantha Sherwood (Samantha Eggar). Stryker has long wanted to make a movie called Audra, and has finally come to the point where he’s going to make it. To prep Samantha for the role, he has her committed to an insane asylum, a move with which she agrees. What she doesn’t agree with is the fact that Stryker decides to leave her there, because he wants to take his movie in another direction. Don’t worry; she’ll be playing a part in all of what is to come.

Jonathan Stryker’s plan is to bring in six hopefuls to audition for the part of Audra for his upcoming film. I’ll be completely honest here—these six characters all have names, but they aren’t going to matter a great deal because they aren’t so much characters as a few character traits. One of them is a dancer (Anne Ditchburn), another is an ice skater (Lesleh Donaldson), a third is a stand-up comic (Lynne Griffin), the fourth is a veteran actress (Linda Thorson), the fifth is (according to Wikipedia) a musician (Sandee Currie), and the last is a young actress (Deborah Burgess).

Now, before I get too far into this, I need to comment on the six women who are going to be contending for the coveted role. That comment is this: it makes no damn sense. What we’re told over and over and over is that the role of Audra is one that an actress would need to fight for, kill for, and die for. So why the hell is an ice skater up for the role? Or a comedian? Or a dancer? The reason given to us in the film is that Jonathan Stryker is basically using this as an opportunity to seduce as many hopefuls for the role as he can.

Anyway, Stryker invites all six of the women to his house for the weekend to figure out who is going to get the role of Audra. Before we get there, though, we’re going to have a long interlude with our sixth potential actress, whose name is evidently Amanda. First, we see her stalked by a guy who turns out to be her boyfriend. Then we see her have a strange dream where she finds her doll in the middle of the road and then has someone run her over. She wakes up only to be killed by someone wearing a hag mask (see the picture above).

So, Amanda won’t be showing up, but that sixth place will be taken by none other than Samantha, who has broken out of the asylum and shown up at Stryker’s home. From here, we’re going to get Stryker randomly seducing the women at his house and yelling at them. Oh, and the killer in the hag mask is going to show up and start knocking off potential actresses. You can see what the movie is doing, though, right? We’ve got an aggrieved actress abandoned in an insane asylum who has broken out and come to the audition for a part she desperately wants and the competition starts dying. If you can’t both see this and see through it…I don’t know what to say.

I’m not going to go into a great deal of detail with the rest of the film here, though. I do want to talk about one moment that is so amazingly bonkers it almost makes the whole thing worth watching. That moment is the death of the ice skater. She goes out on a frozen pond to practice her skating, and it’s clear from the moment she starts that she is not really much more than a base amateur as a skater. Seriously, it’s not like she’s doing spins or fancy jumps. She can do about a half-turn with a jump, and that’s about it. Anyway, at one point, the music she is playing shuts off. She goes to investigate and she finds the doll from Amanda’s dream buried in the snow. And then, the killer in the hag mask starts skating across the ice at her. It’s so insane I can’t even adequately describe it. Sadly, our skater gets killed with a small scythe and not an ice skate. Still, it’s pretty damn magic. Google “Curtains 1983 ice skating” and watch the full scene.

Pretty much everything else in Curtains is a disappointment. None of the deaths are shown in any detail, which is a real problem for a movie that bills itself as a slasher. When our next-to-last victim is finally being attacked by hag-mask, she runs for what feels like 20 minutes through what looks like a studio back lot but is evidently a part of Stryker’s house, and that doesn’t make any sense, either.

None of this does. Curtains is a massive disappointment. So much promise, and it winds up pretty empty. If it had all been as crazy as the ice skating kill, I’d have loved it, but even that goes nowhere. The doll that was such a part of the first two murders never shows up again. This felt like a waste of time.

Why to watch Curtains: There is a moment in this so bonkers that it cannot be defined.
Why not to watch: So, so many reasons.