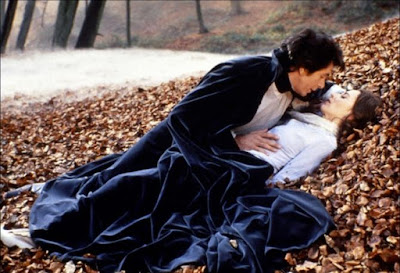 Bram Stoker’s novel Dracula is almost certainly one of the most adapted stories on film, not unlike Shakespeare’s Hamlet. This is not even including stories that are more or less the same thing as Dracula (or Hamlet) under different names. Of all of the various Draculas that exist, the 1979 version, titled simply Dracula as many of them are, is probably the first filmed version I ever saw. I would have been 11 going on 12 when it was released, and I’m also pretty sure that I’d seen the stage play before this time (or potentially around this time—this is decades ago, so the time is a bit hazy). Certainly I knew the story going into this.

What this means, like it or not, is that at some level, this version of Dracula is formative for me. It reminded me a great deal of the staged version that I saw in Chicago, which further cemented the idea that this is what Count Dracula should be and look like. Looking at his IMDb page now, I’m a bit gobsmacked that Langella didn’t have a long-standing career in horror after this role; I genuinely thought he did, because I associated him with horror movies for years, such is the strength of this role.

And yet, for some reason, Frank Langella is sort of the George Lazenby of Draculas. Everyone remembers Lugosi and Lee and Oldman and even Kinski (whose version came out the same year). Despite this, Langella is wonderfully suited to the role, or certainly was in 1979. At 41 years old, he was possessed of a gruff, exotic form of sexuality despite being from Bayonne. That evident sexual power feels like a product of the late 1970s. It does feel a bit unusual compared against Lee and especially Lugosi, and yet Langella works perfectly in the role.

There are some inexplicable changes from the base story that don’t really affect the way the story plays out in general, but streamline aspects of the story that didn’t really need it. For starters, the film flips the roles of Lucy (Kate Nelligan) and Mina (Jan Francis). In the novel and virtually every other version of the story that I’ve seen and can remember, Lucy is Count Dracula’s first victim in London, while Mina is the fiancée of Jonathan Harker (Trevor Eve) and the woman who becomes Dracula’s obsession. Here, Mina is the Count’s first victim, Lucy is engaged to Jonathan, and it is she who ends up travelling with the Count.

More, and just as inexplicably, we’ve got significant changes in last names here. Mina is suddenly Mina Van Helsing, daughter of Professor Abraham Van Helsing (Laurence Olivier!), who will eventually show up to deal with the Count. In the original story, he’s a family friend; here, he’s showing up to avenge his daughter. Lucy is no longer Lucy Westenra but Lucy Seward, daughter of Dr. Seward (Donald Pleasance!), who runs the local asylum. Both of these changes seem to be to simply reduce the number of families who care about the presence of a nosferatu in London. I’m not sure why they happened.

Other truncations appear here as well. This version of the story cuts the entire first section of the book where Harker travels to Transylvania and deals with Dracula in his castle, beginning instead with Count Dracula’s arrival in London. We’re also going to lose some characters here that the film deems unnecessary. Adventurer Quincey Morris is the main one to go here—in the book, he becomes a central character in the eventual destruction of Dracula at the cost of his own life, living on through the child of Jonathan and Mina. Here, he’s simply not deemed a necessary part of the story.

This version of Dracula takes its time. Despite eliminating what is essentially the first act of the book, it’s a mere 20 minutes shorter than Francis Ford Coppola’s version and nearly half an hour longer than both the 1931 version and Hammer’s first take on the legend. Rather than powering through the story, we’re going to go much more slowly through, lingering over scenes, taking its own sweet, sensual time.

The biggest problem specific to this version are the changes that have been made to the original story. I can live with the omission of characters like Quincey Morris; this isn’t the first or only version of the story to omit him as a character. It’s the other changes that seem so completely arbitrary. Why flip Mina and Lucy? Why make Mina the daughter of Van Helsing? There’s no clear narrative reason to do this, and it messes with the mythology in an unnecessary way. A bigger problem in general is that the story of Dracula is a known quantity. Even if you’ve never read the book (and you should—it’s great), you know the story, and there’s nothing new here in terms of that.

Despite all of this, I like this version of Dracula. That might clearly be bias talking since, as I said above, I think this was my first filmed version. Even disregarding that, and even taking into account that Langella doesn’t attempt an accent and at times looks fresh off the set of Badham’s Saturday Night Fever, this works far more than it doesn’t.

Why to watch Dracula (1979): Frank Langella is such a great casting choice for Dracula and he makes this film surprisingly sensual.
Why not to watch: Well, you certainly know the story, so there aren’t really any surprises.