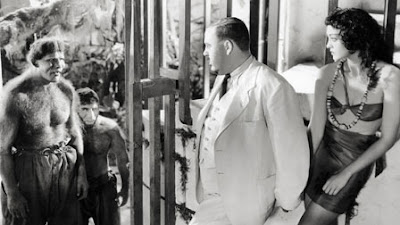 There are some classic stories that continue to be made and remade over and over again. Consider, for instance, just how many versions there are of Dracula or Hamlet. One of the stories that seems to show up every now and then, is The Island of Dr. Moreau. The earliest version (I think) is Island of Lost Souls from 1932. There are some real joys in this version, although it does have a drawback or two. But it’s worth noting that this is a more entertaining version than the Val Kilmer/Brando version from the 1990s and has the distinct benefit of both Charles Laughton and Bela Lugosi.

Edward Parker (Richard Arlen) has been shipwrecked and is picked out of the water by a cargo ship that is on its way to deliver animals to an unnamed island in the middle of nowhere. The captain (Stanley Fields) is a drunk and mistreats M’ling (Tetsu Komai), the servant of a passenger named Montgomery (Arthur Hohl). When Edward reacts badly to this, the captain forces him off the boat when he delivers his cargo to the uncharted island.

It should not be a shock based on my first paragraph here that this island belongs to Dr. Moreau (Charles Laughton). Moreau is eccentric and a bit secretive, and Edward soon discovers that Moreau and Montgomery appear to be vivisecting one of the bestial men who inhabit the island. Of course, that’s not the case. The truth is that Moreau imports these animals and, through a series of experiments based in the weird science of a world that really didn’t understand the idea of genetics, morphs them into human beings. So, the bestial men of the island aren’t actually men at all, but animals essentially uplifted into human status.

Yeah, the science is weird, and it gets weirder. These various treatments happen in a place known to the inhabitants as the House of Pain. To maintain their humanity, the animal men have a codified law system that is regularly intoned by the Speaker of the Law (Bela Lugosi, unrecognizable behind a face full of crepe hair, but easily identified once he speaks). It’s also clear that acting more animal-like will cause their animal traits to become more evident. Yes, this means physical traits, too. Like I said, this is from a time when the idea of genetics wasn’t really understood.

There’s one last big plot twist here. Edward, we learn, is engaged to Ruth Thomas (Leila Hyams). But, of course, there is a single woman on Moreau’s island. This is Lota (Kathleen Burke), who is, of course, not a human woman. Lota was created in the House of Pain from a panther. And, of course, Lota does not retain much in the way of bestial features like all of the man-animal hybrids do. Moreau decides to keep Edward on the island as long as he can to see if Lota will express real human emotions and, eventually, reproduce. Gotta love these pre-Code films!

Eventually, Ruth comes to the island and this gives Moreau more opportunities to experiment with his uplifted critters. In this case the goal is to see if his ape-like creation Ouran (Hans Steinke) can successfully mate with Ruth. And, of course, all hell is going to break loose. We’re going to get lots of beast men reasserting their animal features and starting to go berserk. We’ll get lots of chaos. Despite this being pre-Code, we will also find that the film conforms to the idea of making sure that villains always get punished and that all monsters, no matter their innocence or intent, don’t make it to the end credits. In those days, interracial romances were taboo, let alone inter-species ones.

There’s a lot to enjoy here. Island of Lost Souls is weird and silly in so many ways, but it’s intended to be, after a fashion. It’s not a bad version of the original H.G. Wells story, albeit cleaned up and streamlined for the 1930s audience. It’s not scary in the least, and that doesn’t really matter either. Having Bela Lugosi as a beast man with facial hair like a macaque is worth at least half the price of admission. Having Charles Laughton decked out in a stereotypical bad guy Van Dyke and carrying a whip is easily worth the rest.

My biggest problem with Island of Lost Souls is that it’s way too short. Unfortunately, it comes from a time when movies tended to be a lot more efficient in their storytelling in the sense that there were plenty of movies that didn’t scrape much past the hour mark. This could really stand a little more depth and a little more fun with the beast men. Stretch this out another 10-15 minutes, and you wouldn’t be doing anyone a disservice.

Truthfully, Island of Lost Souls was produced by Paramount and that makes me a little sad. If this had been produced by Universal, we’d be talking about it in the same sentence as Frankenstein and Dracula.

Why to watch Island of Lost Souls: A solid version of a damn good story.
Why not to watch: At 70 minutes, it’s far too short.