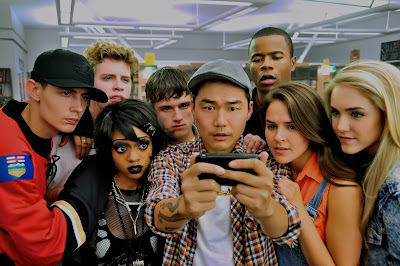 I go into every movie hoping that I’ll like it. I think that’s only natural. I’m not someone who revels in bad film or who celebrates movies that are “so bad, they’re good.” I mean, I’m not immune to the charms of such a film, but I don’t tend to seek them out. With Detention, we’ve got a film that I classify as “so bad it’s not even good.” Words defy how much I hate this movie, but for the next 800-1000 words, I’m sure as hell going to try.

Detention bills itself as a horror/comedy. There are two problems with that: it’s not scary and it’s not funny. And it starts pretty promising. The problem here, and I’m not going to pull punches on this, is that Detention has ADHD. This is a movie that is all the hell over the place. Detention desperately wants to be Scott Pilgrim vs. the World, and for as much as I disliked that movie, Detention can’t carry its book bag.

Detention has such ADHD that it’s almost impossible for me to look at the plot in a coherent way. On the surface, we have the town of Grizzly Lake which sounds like it should be somewhere in western Canada but evidently isn’t. We know that it isn’t in Canada despite really wanting to be in Canada because one of the students at the high school is specifically referred to as a Canadian. But before we get there, we’re going to spend a few minutes with Taylor Fisher (Alison Woods), who will tell us why she’s great and everyone else is terrible. And then she’s going to be killed by our movie’s killer.

Because Detention is the sort of movie it is, everything is going to be fourth wall breaks and meta-commentary. Our killer is going to be modelled on a character called Cinderhella, who exists within the world of the film as a Jason Voorhees-like supernatural cinematic serial killer. A great deal of the movie’s…not real estate, but mental effort…goes into the idea that a sequel to the first Cinderhella movie is due to be released and a third one is on the way. When we get there eventually, our characters are going to pirate the third unreleased Cinderhella movie that will more or less mimic their situation and include a group of high school students pirating a movie that exists in the Cinderhella landscape. It so desperately wants to be clever in things like this when all it really is is just convoluted.

Tossed into this mix are our characters. Much of our focus will be on the ridiculously-named Clapton Davis (Josh Hutcherson), the high school hipster who naturally has earned the hatred of the school principal Verge (Dane Cook), who it turns out was the high school nerd/loser in 1992. This is going to be important, because Detention loves 1992 the way a men’s rights activist loves his fedora. Clapton has recently started dating Ione (Spencer Locke), who used to date the high school jock/bully Billy (Parker Bagley). Carrying a torch for Clapton is Riley Jones (Shanley Caswell), the suicidal high school loser. Somehow carrying a torch for her is Sander Sanderson (A.D. Johnson).

And from here I’m going to stop attempting a blow-by-blow breakdown of the events of Detention. The reason for this is simple: Detention is convinced of its own wit and cleverness. This is a story that appears to go in 100 different directions at once, adding on layers and tangents at every opportunity. By the time we get to the end, all of these different paths and tangents are all going to come together so that every side comment, every raised eyebrow, and every piece of text that pops up on the screen is going to be relevant and important in the final resolution of the film. And I’m not kidding about the 100 directions. Frequently, when a new character shows up, we’re given a 1-2 minute montage about this character to show us how he or she is and how he or she might fit in.

The actual resolution of the film is going to involve weird science, time travel, aliens, body switching, and somehow, a guy who has been in high school detention for nearly 20 years. And in all of this, despite the promise of a horror film with at least some slasher elements, we pretty much get nothing.

I hated this movie. I hated just about everything about it. I watched about 60% of it and was forced to pause it, and when it was time to get back to it, I had to sit with the damn thing back where I had left off for a good half hour before I could muster up the strength to push play again. I hated the characters, I hated the premise, and I hated everything that went in to the making of this movie. Detention desperately wants to be funny, and it isn’t. It desperately wants to be clever, but it has made the common mistake of substituting complicated for clever. Everyone in this film is an asshole.

And it’s worse than that, because Detention hasn’t bothered to learn from the bullshit ideas of past films. Our high school loser Riley Jones is presented to us as a friendless loser who could not get the time of day from anyone. High school may have been decades ago for me, but I remember at least parts of it well enough. Not to be crude, but a reasonably attractive person like Riley’s portrayer Shanley Caswell would not be the high school loser. Oh, she might not be well-liked, but it would unlikely that she would be the constant butt of jokes and the target of her teachers.

Why to watch Detention: If you’re into post-modernism, this is here for you.
Why not to watch: It has ADHD, Asperger’s, and Tourette’s syndrome