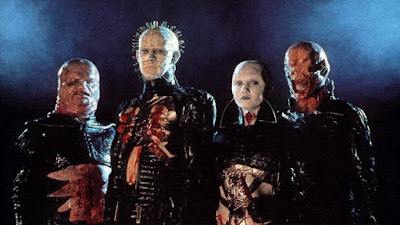 If memory serves, I saw Hellbound: Hellraiser II (which I’m going to call Hellraiser II from this point forward) before I saw Hellraiser. This wasn’t by design. I think I walked into my living room when a college roommate had just started watching this first sequel (there are 10 total Hellraiser movies with the tenth released in 2018! Who knew?) and I sat down and watched it, too. It’s plenty gory, far more extreme in that respect than the original film. And because it doesn’t have to do a great deal of world building, it gives us a lot more of what we’re hoping for in a film from this series.

Hellraiser II picks up pretty much immediately after the conclusion of the first film, although we do get a little prequel of British military officer Elliott Spencer (Doug Bradley) opening the Lament Configuration and becoming the Cenobite Pinhead. From there, we jump back to the film’s present with survivor Kirsty Cotton (Ashley Laurence) in a mental institution because of her wild stories of the dead returning, skinless humans, and monsters from another dimension. Her boyfriend from the first movie will not appear in this sequel—somehow he’s managed to escape dealing with puzzle boxes and Cenobites.

Sadly for Kirsty, she’s wound up in the care of Dr. Philip Channard (Kenneth Cranham), who has long been obsessed with the Lament Configuration. He seems to possess a couple of them along with some medical horrors in his home. When he hears Kirsty’s story and learns about the mattress on which Julia (Claire Higgins) died, he makes a few moves to get the mattress delivered to him. His experiments begin with one of his mental patients (Oliver Smith) who, because of his particular delusion, slices himself up with a razor on the mattress. Because this is the fictional world it is, the blood brings back Julia, who, now skinless like Frank in the original film, kills this victim and demands more to regenerate her skin.

Everything comes to a head with the addition of Tiffany (Imogen Boorman) a mute patient of Channard’s who is obsessed with puzzles. Knowing Channard’s obsession with the Cenobites and the Lament Configuration, it’s not a shock that Channard has been keeping her around to open the box for her. Everything comes together at the same time—Kirsty and Channard’s assistant Kyle (William Hope) arrive at Channard’s house just as Julia has almost finished regenerating her skin thanks to a series of now-dead prostitutes chained in the attic. She completes her regeneration by killing Kyle. Channard arrives with Tiffany, who opens the Lament Configuration, leading the way to the Cenobites’ dimension.

One of the things that Hellraiser II gets right is that the Cenobites show up about halfway through the movie. Unlike the original Hellraiser, which gives us the Cenobites toward the end, building up to them slowly, with this first sequel, we’re going to get a hell of a lot more of them, which is essentially what most Hellraiser fans want. Most of the second half of the film takes place in this Cenobite dimension, which is reminiscent in certain ways of Labyrinth in that it’s a massive labyrinth.

Where Hellraiser II succeeds is in ramping up the gore as much as it can. In the first film, we get a skinless Frank Cotton (Sean Chapman) who works with Julia to come back to life through the murder of men Julia brings to him. Frank got this way because of his own experiments with the Lament Configuration. We’re going to get a reprisal of skinless Frank along with a skinless Julia. Julia’s arrival back into the world is truly awful in so many ways. Her attack and feeding from the mental patient is neither quick nor implied; this scene is blood-soaked in the extreme. The costuming is also great. The Cenobites are still horrific, appearing as essentially chic torture victims, most with open wounds, terrible disfigurements, and really nasty scarification and piercings.

Where Hellraiser II mainly fails is in the terrible special effects. As with the first film, there are moments here where there are supposed to be supernatural effects of one sort or another. These appear to be almost drawn directly onto the film itself. It is the most rudimentary CGI imaginable, and that’s kind of a shame, because so much really is done well here.

The truth of Hellbound: Hellraiser II is that it is at least partly incoherent, almost by design. The world of the Cenobites doesn’t make a great deal of sense. Apparently, despite the Cenobites being more or less hellish royalty, there are unexplained things that prey on them in one way or another. The film’s world posits the idea that it’s possible to die in hell. I’m not entirely sure how that works, or if anyone really cared enough to consider the possibilities of what that might actually mean. I kind of like it despite this partial incoherence. In a way, the fact that so much is left unexplained and/or inexplicable is a part of its dark charm.

Why to watch Hellbound: Hellraiser II: It goes a lot further in upsetting ways than the original Hellraiser.
Why not to watch: Despite great makeup effects and costuming, the special effects are terrible.