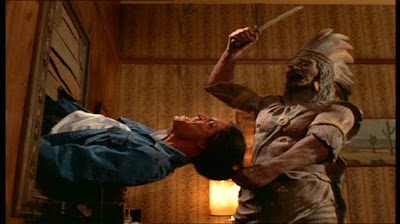 I think there’s a reason that when you think of an anthology film, you almost always think of horror. Oh, sure, there are comedy anthologies out there, many of which are truly terrible, but horror seems to be the go-to for the filmed short story. Asked to name one, there are plenty of places you could go (Black Sabbath, XX, The ABCs of Death, etc.) but Creepshow is probably the immediate though of plenty of people. It’s certainly my first thought. It managed to present us with carnival spook show-style “scares” that are more fun than really scary. It’s fun and scary in the way a rollercoaster is fun and scary, so it was probably inevitable that there would be a Creepshow 2.

And here’s the thing: I could effectively review this movie by the end of this paragraph. If you’re familiar with Creepshow and like it, your thought about the sequel is almost certainly what mine was. You almost certainly hope that it manages to keep that same, goofy comic book feel where the scares are more fun than scary and the gore is more clearly latex than really gory. And while you hope that, you also almost certainly realize that it’s ultimately going to be a disappointment. The best story here will probably be better than the worst story from the original Creepshow, but there’s no way that it will match the highs of segments like “The Crate.” And…well…that’s pretty much all true.

But let’s get into a little more detail here. There are only three stories in Creepshow 2 if you don’t include the linking story that runs at the start, end, and between the segments. Our first segment is Old Chief Wood’nhead. Two white storekeepers (played by George Kennedy and Dorothy Lamour, no less) are given a sacred gift by a local native chief (Frank Salsedo) for their years of help. The chief’s nephew, along with a couple of friends, ransacks the store, steals the gift, kills the proprietors, and leaves. This brings to life the store’s wooden statue, who hunts down the three malefactors.

The second story is called The Raft, and it’s based purely on a Stephen King short of the same name. A group of four early-20 somethings swim out to a raft in the middle of a lake. Once they are there, they are attacked by something in the water that is supposed to resemble an oil slick but actually looks like a gigantic black garbage bag.

Our third and final story is, I think, the best of the trio. The Hitch-hiker features a woman (Lois Chiles) who is paying a gigolo but needs to get home before her lawyer husband to keep up the charade of their marriage. As she drives home, she loses control of the car for a moment and accidentally kills a hitchhiker (Tom Wright). She drives off, and discovers that the dead hitchhiker keeps showing up, saying “Thanks for the ride, lady!” and consistently bearing the various injuries of her many contacts with him.

Our frame story consists of a kid named Billy (Domenick John) who can’t wait for his new issue of Creepshow. He gets it courtesy of the Creep himself. He goes to the local post office to pick up a package he claims is a Venus flytrap bulb. This is destroyed by a gang of bullies who end up chasing Billy only to discover that Billy has a particular secret.

Sadly, Creepshow 2 has far more issues than it does things correctly. The stories aren’t bad, but they also aren’t that great. The first story has plenty of room for some quality gore but it doesn’t really give us any. The middle story has the best original source material, but is so clearly done with absolutely zero budget that it comes across as ridiculous. It’s kind of a shame, too. There are moments when the oil slick thing is on the attack that it looks pretty good, but when it’s just floating on the water, it seriously looks like a friggin’ Hefty bag. The last story would have fit in pretty nicely in the first film. Of the eight stories total between the two movies, I’d probably rank it right around fourth.

But the frame and interlude story is the biggest issue here. It’s just dumb. Worse, a great deal of it is done in very poor animation. It looks a great deal like someone hired animators and artists who weren’t quite good enough for the Heavy Metal movie but still wanted to work in the industry. It’s the animation in particular that is rough and ugly.

Ultimately, it’s not worth it. The star power comes in the first segment and is completely wasted, since neither George Kennedy nor Dorothy Lamour manage to make it more than about 10 minutes into the story. Beyond that, it’s low-grade horror shorts that aren’t scary enough to be interesting and not dedicated enough to being camp to be fun.

Why to watch Creepshow 2 Anthologies really only work with horror.
Why not to watch: It’s a huge downgrade from the first Creepshow.