Ten Days of Terror!: The Fury

Film: The Fury
Format: DVD from Rockford Public Library on The New Portable. 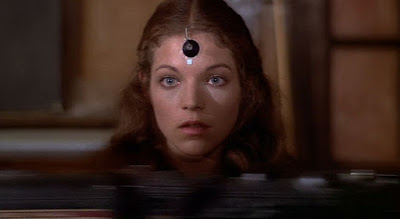 In 1976, the release of Carrie based on Stephen King’s novel probably started what would become a series of horror/science fiction movies about or involving psychics. Dreamscape, Firestarter, The Shining, Scanners…all of these were variations on a theme. Many of these centered on government plots to produce or strengthen psychics through one means or another. While Carrie might have been the first killer psychic movie, it was The Fury that gave us a governmental twist on the proceedings. It’s not a coincidence that Brian De Palma directed both Carrie and The Fury.

Because The Fury was directed by Brian De Palma, we’re going to get the joy of a bizarre thriller with the sort of cast list that someone like De Palma could arrange in his prime. This means Kirk Douglas, John Cassavetes, Charles Durning, and Carrie Snodgress. It also means that we’re going to get Amy Irving, etched forever into public consciousness as the girl who goes to Carrie’s grave at the end of Carrie.

Our psychic, at least initially, is Robin Sandza (Andrew Stevens), the son of Peter Sandza (Kirk Douglas), a CIA operative. In Israel, an assassination attempt is made on Peter specifically to kidnap Robin, who is a powerful psychic. The operation is pulled off by Ben Childress (John Cassavetes), Peter’s CIA colleague. The kidnapping is successful, but the assassination is not. Peter survives, and manages to put a round into Ben’s arm before disappearing and beginning the hunt for his son.

Meanwhile, Gillian Bellaver (pronounced with a hard “G” and played by Amy Irving) has begun showing some evidence of psychic abilities. These developing abilities lead her to Paragon, an institute that studies such things. There she meets Hester (Carrie Snodgress) and Dr. McKeever (Charles Durning). Little does she know that Hester’s paramour is none other than Peter Sandza, who has tracked Robin to Chicago, managing to keep out of sight of the CIA for the most part.

Naturally, we’re going to get a lot of things converging. It turns out that McKeever knows nothing of the work of Ben Childress, and believes Robin to be dead. Childress naturally wants Robin to use as a weapon against American enemies and recognizes that Gillian might be just as powerful, and thus just as useful. What makes all of this difficult is that Robin and Gillian have a strange psychic connection. It’s also worth noting that both of them have the ability to make other people bleed, initially from recently-healed wounds and eventually from just about anywhere.

The Fury is the sort of film that is filled with a great deal of psychic mumbo-jumbo, because of course it is. That’s kind of the point. There’s a lot of science-y talk because it wants to have the veneer of science over what is actually a great deal of nonsense. And that’s okay. the Fury wants to be taken seriously enough while the movie is playing, and it’s going to give us the trappings of “real psychic science” like Zener cards and the rest of it. But no one is watching this because they want a scientific treatise on psychic phenomena. No, we’re looking for blood spray and telekinesis used for nefarious purposes.

The Fury is interesting, and I can imagine that for 1978, it was scary as hell for people. I seem to recall that it was a time when there was a lot of interest in things like psychics and telekinesis. This naturally took that interest to a dark place, which is exactly what horror movies are supposed to do. The last ten minutes or so are really what the audience is here for, although there are certainly hints of what is to come before we get there.

As a side note, there is a sequence that takes place in a gigantic indoor amusement park. That park was called Old Chicago, and it existed for about half a dozen years in a Chicago suburb. I remember it and my family went there at least once. It was an amusement park/mall, and it was very confined. The scenes in it here are so strange—the place looks so odd, like a warehouse with rides in it. No wonder it closed down and was eventually razed.

Anyway, The Fury is kind of an ultimate late-‘70s movie. For the time, it’s just about perfect. The only issue with it now is that the theme, outfits, and general plot haven’t aged well in 40 years. Still, if you can watch something and see it from the time it was made, there’s a lot here worth seeing.

Why to watch The Fury: This might be the progenitor for many a psychic film to follow.
Why not to watch: No good reason aside from it not aging as well as it could have.