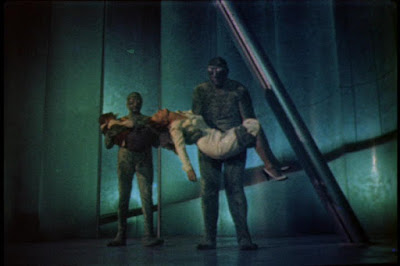 There’s a part of me that loves 1950s science fiction because it has so many qualities that I admire. It’s so often campy without trying, meaning that it’s the sort of camp that has a chance of actually being good. It’s also so often earnest. Science is respected as being the source of American (and thus, in the mind of these movies, human) strength and power. The aliens generally want to destroy our civilization and enslave us or take over our planet. And, since this is pre-Close Encounters of the Third Kind, we get a good variety of aliens to attack us. Invaders from Mars, as the name implies, is right in that sweet spot of alien invasion, campy characters, weird special effects, and boostering for the American military.

One night, young David MacLean (Jimmy Hunt) sets an alarm for himself to do a little stargazing. After a mild, good-natured rebuke from his parents, (Leif Erickson and Hillary Brooke), David is awakened by a thunderstorm. Looking out into it, he sees a massive spacecraft descending not too far from the family home. He wakes up his father (again), who puts the boy back to bed and decides to go take a look. When he finally comes back the next morning, Dr. MacLean is angry, short, sullen, and otherwise unemotional. He’s almost, dare I say it, a pod person. David notices a strange puncture mark on the back of his father’s neck.

Panicked, David tries to find help anywhere he can. He also notices a young neighbor girl vanish out in the area where the saucer has landed, and when she reappears, she’s also emotionless and different. David seeks help from the local police only to discover that the police chief has been taken over as well. The police call in Dr. Pat Blake (Helena Carter), who does her own investigation, including contacting Dr. Stuart Kelston (Arthur Franz), who knows David and works with his father. Soon enough, David’s parents show up and it’s clear to him that his mother has been taken over as well. It’s also clear to Pat Blake that something is up, so she claims that David is ill, possibly with polio, and will be taking him to the hospital.

And, well, it goes kind of crazy from here. Dr. Kelston is on board with David’s crazy flying saucer claim almost immediately and soon has the Pentagon involved. Soon enough, everyone believes that an invasion of Martians is on the way, and is happening in this otherwise sleepy area because of a nearby military base featuring rocket research. More and more people in authority are being sucked into the saucer-covering sand pit behind the MacLean house. And, naturally, both David and Dr. Blake are going to wind up in the sand pit, attacked by Martians and running around inside the flying saucer.

Movies like Invaders from Mars are fun because of just how seriously they take themselves while spouting pure nonsense. Dr. Kelston dives in by claiming that there are “theories” that people follow regarding Mars that the civilization—because it is not evident on the surface of the planet—must be entirely underground or that they live in spaceships. They also somehow correctly, mind you theorize that the Martians have somehow bred an entire race of synthetic mutant humans to prevent their own extinction. Seriously, this would indicate not only that we had contact with Martian civilization, but significant contact.

It’s not just that, though—it’s how all of this is repeatedly brought up by the characters. Our scientist, Dr. Kelston, in defense of the “theory” that the entire Martian civilization has somehow produced spaceships where they all live because their planet doesn’t have a suitable atmosphere, asks Dr. Blake if she could prove that the synthetic mutants didn’t exist. It’s one of the most unscientific lines of reasoning possible. It comes across as so innocent and childlike in its own way.

There’s simultaneously a deep respect for science as a way to solve virtually every problem as well as a completely childish idea of what science actually is. Once we get the military involved, we can see what the real point of Invaders from Mars was: it’s all about the military coming in and tossing grenades at the mutants because that’s how you kill ‘em.

The most difficult part of watching Invaders from Mars is that it’s impossible to tell if it’s serious or has its tongue firmly in cheek. It feels like either one could be true. Like really good parody, without a wink or a nod, there’s no way to tell. It’s a Poe’s Law version of alien invasion. That said, it’s hard not to love it at least a little bit.

Why to watch Invaders from Mars: 1950s science fiction is so earnest.
Why not to watch: It’s also so silly.