Off Script: The Taking of Deborah Logan/The Taking

Film: The Taking of Deborah Logan (The Taking)
Format: DVD from Rockford Public Library on laptop. 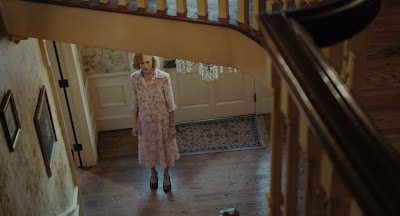 I don’t know why it was so difficult for me to find The Taking of Deborah Logan (also known as simply The Taking). I mean, it’s certainly a movie I’d heard of when it was released, and it’s only a few years old, but it’s not available in the entire network of my local library, not at the local university library, and not evidently owned by NetFlix. So, when I found it in a library that I’m able to go to only about once a month, I snatched it up.

The Taking of Deborah Logan is a film that is going to be thought of as found footage despite the fact that it kind of isn’t in the sense that the footage wasn’t lost and recovered as in films like The Blair Witch Project and Cloverfield. What it is more than “found” footage is “unedited” footage. This isn’t me being snarky, because the movie was certainly edited. It’s designed to look like the unedited footage of what was to be a documentary, though. This means a lot of non-professional-looking camera shots, some shakiness, and what comes across as unrehearsed dialogue.

While the movie is smart enough to move us into the weird and scary pretty quickly, we start relatively tame. Mia (Michelle Ang), Gavin (Brett Gentile), and Luis (Jeremy DeCarlos) are making a documentary about Alzheimer’s disease and the toll it takes on the patient, but especially on the rest of the family and the caregivers. They have taken Deborah Logan (Jill Larson) as their subject, even if the real subject of the film is (in their minds at the start) Deborah’s caregiver daughter Sarah (Anne Ramsay). Deborah is initially against the entire procedure since she is a private person and not really willing to expose any embarrassment on camera. Eventually she agrees when Sarah reminds her that they need the money and are in danger of losing the house without the money from the filmmakers.

Where we go from here isn’t that hard to figure. Deborah starts to fade almost immediately and at an increasingly rapid pace. As she declines, her behavior becomes more and more bizarre, and less and less like what we might expect with an Alzheimer’s patient. Deborah’s past career as a switchboard operator comes into play as well—her old equipment more or less comes back to life and starts receiving incoming calls from a line that once belonged to a local physician who was accused of ritualistic and cannibalistic murders of four young girls. Yes, that’s going to become important as we continue.

I’m going to stop here in terms of the plot summary, because a lot of where we go from here isn’t going to be that surprising to anyone who is a veteran of even a handful of horror movies. There is a moment near the end that plays as fairly shocking, but als (to me, at least) doesn’t really fit with everything else we’ve seen to this point in the film. Virtually everything else, though, follows a basic progression that you could guess most of when you know the premise of the movie.

That, more than anything is my problem with The Taking of Deborah Logan. Horror is arguably the genre that has the most problem with cliché, and even if you think other genres (comedy, rom-com, etc.) have a bigger cliché problem, you can’t get away from it in horror. The Taking of Deborah Logan dives head-first into those genre clichés and does nothing to play with them or subvert them. It simply follows along with them, which means that even the jump scare moments feel like they come exactly when we expect them to.

There’s some here that I like. The idea of having this start with Deborah suffering from Alzheimer’s and having what is happening to her more or less come out of that. It almost feels as if the events that happen around Deborah are things that have been repressed by her and are coming out now because she no longer has the force of personality to repress them.

The truth is that I want to like this more than I do. It’s sadly clichéd when it could have done something much more interesting with the premise it has. It’s hard not to be a little disappointed. I’d love to say that it might be the case of young writers and a young director still feeling their way into the business, but when you take into account the other projects of writer/director Adam Robitel, The Taking of Deborah Logan seems like a high point.

Why to watch The Taking of Deborah Logan: Great premise.
Why not to watch: Clichéd execution.

Email ThisBlogThis!Share to TwitterShare to FacebookShare to Pinterest
Labels: Adam Robitel, horror, The Taking, The Taking of Deborah Logan