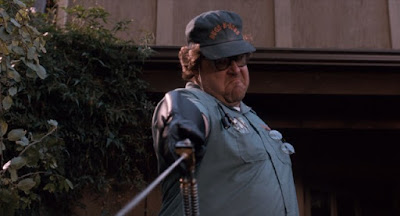 Before I get into a full look at Arachnophobia, I feel like I should more fully explain my own fear of arachnids. Before you, faithful reader, get on your high horse telling me about how useful spiders are and how important they are to an ecosystem, and even how many harmful insects they eat, I get it. I really do. I’m in full agreement. If there’s one in my house, I try not to kill it and get it outside instead. I understand their importance. They just freak me the hell out. I know intellectually that they are important and useful and beneficial. And they still make my sphincters clench.

The film opens in the Amazon rain forest where entomologist James Atherton (Julian Sands) is hunting for new species of creepy crawlies. What he finds is a new, aggressive species of spider that seem to be communal in many respects. He’s visited by photographer Jerry Manley (Mark L. Taylor), who is recovering from a fever. During this expedition, one of the spiders finds its way into Manley’s tent. It bites him, and the bite proves to be highly virulent, killing the photographer in a matter of moments. His death is chalked up to his fever, and his body is packaged up to be returned to the States. Naturally, a spider hitches a ride.

Simultaneously, Ross (Jeff Daniels) and Molly Jennings (Harley Jane Kozak) have moved to the small California town of Canaima, which is naturally the home town of our now-dead photographer Jerry Manley. The spider gets out, and because this is the way movies work, it gets picked up by a raven. En route to the raven’s nest, the spider bites the bird, which drops dead right in front of the barn on the new Jennings property. Into the barn goes the spider, where it manages to mate with a common house spider. And this is going to be exactly where the plague to come will have its epicenter.

Meanwhile, Ross Jennings is discovering that the promises he was made in Canaima have turned out to be false. Specifically, Ross is a doctor and has moved to town to take over as the medical professional in the town. He discovers upon his arrival that the retiring local doctor (Henry Jones) has decided not to retire and is planning on keeping all of his patients…which is pretty much the entire town. Ross begins his practice just as the spiders start spreading out. Coincidentally (because this is also how movies work), people start dying around the town, and the deaths are people who started seeing Ross Jennings.

But, eventually, the people in the film will figure out what those of us watching have already known, thanks to our privileged position. The spiders are responsible for the deaths, and the spiders have their beginning in the barn of the Jennings family. The fact that the spiders seem to have sprouted up immediately is glossed over—apparently the creation of a new species means that the mating pair has children that spring out whole within a day or two. This is despite there being an egg sac hidden somewhere as well. In the moment, it’s easy to overlook this plot hole, but it’s hard not to see it once the film is over.

So, Arachnophobia has a lot of spiders in it, some of which were real and some of which were animatronic. I’ve already talked about my position on spiders, so there were certainly some moments where I had some real issues. But I made it through. Because of my own particular hang-ups, it’s unlikely that this is a movie I’d watch again any time soon, but I can’t deny that it’s fun. A great deal of this comes from the appearance of John Goodman as local exterminator Delbert McClintock, who is some entertaining comic relief.

I liked Arachnophobia, but my own fears and issues prevent me from liking it as much as it deserves. It’s got massive plot holes, and you won’t care while watching it. It’s goofy and weird, but has some genuine moments of scare. You could do a lot worse.

Why to watch Arachnophobia: It’s exactly the right level of camp to be funny .
Why not to watch: Plot holes you can drive a tractor trailer through.