Ten Days of Terror!: A Cat in the Brain (Un Gatto el Cervello)

Films: A Cat in the Brain (Un Gatto el Cervello)
Format: Streaming video from Kanopy on the new internet machine. 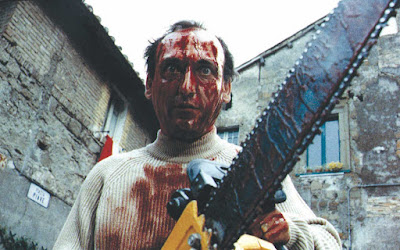 Lewis Black used to do a bit about candy corn. He hates candy corn (as everyone really should), but finds that every year, he approaches it as if the concept is entirely new to him only to rediscover every year how much he doesn’t like it. This is almost exactly my reaction to most Italian horror films. I always desperately want to like them and usually end up disappointed and confused. So it is with A Cat in the Brain (or Un Gatto el Cervello), a film that makes this worse by having a truly great name and at least one poster (the cat looking out of a human skull) that ranks among the greatest of all time. It’s probably asking too much for the film to live up to either of these things, and it really, really doesn’t.

I’ll give this all the credit in the world for creativity, though. A substantial amount of this film was produced in post-production using scenes and clips from previous Lucio Fulci films. In this one, Fulci, playing himself, starts to have real-world visions of some of the atrocities that he is filming. So, he spends the day filming a man hacking up a body with a chainsaw and then cooking and eating part of the corpse. That day, he’s unable to eat meat at lunch and pictures a handyman with a chainsaw suddenly using it on people.

In response to this, Fulci heads to a local psychiatrist (David L. Thompson) for some help. The psychiatrist hypnotizes him and then does a full-on Shakespearean soliloquy to the audience, telling us that he will now regularly hypnotize Fulci, commit grisly murders himself, and then cause Fulci to think that he has done them himself. That’s it. The psychiatrist goes around murdering people with a variety of bladed instruments (as seems to be the case with many a giallo) and Fulci has waking delusions about people being stabbed or decapitated in various ways. Eventually, when we’ve had our fill of chainsaw beheadings and people being repeatedly slammed into broken glass, the film ends.

A more realistic and accurate way to describe the film is that A Cat in the Brain is more or less an excuse for Lucio Fulci to:
a) Appear in one of his own films,
b) Use a lot of old footage from films he’d already made,
c) Offer up ridiculous psychology, and
d) Have footage of random, completely unconnected stabbings and mutilations.

A major issue I take with the film is just how sloppy it is. Our erstwhile murder psychiatrist is called, over and over, Dr. Schwartz, or perhaps Dr. Schwarz. However, the sign on the front of his building lists him as “Dr. Swharz,” which is not just not a name, it’s not even pronounceable. It’s also the sort of detail that would and could easily be fixed by anyone connected with the production. And the “Oh, well, they’re all Italian, so they didn’t know” defense doesn’t work; David L. Thompson, who plays Schwarz/Swharz was from Eugene, Oregon.

What this all means is that A Cat in the Brain has all of the problems of a typical Italian horror movie/giallo. It’s messy in terms of its plot and while there’s absolutely no shortage of gore here, most of it is ridiculously fake. Fulci even literally attacks cans of red paint at one point because they remind him of the blood he uses in his films. So much of this comes across as just cheap and silly, and what is worse, ultimately pointless. There aren’t many films that can come back from that.

You can tell me that I’m overthinking this and that I’m taking it too seriously. I can see that, especially if you know nothing about this movie and have never seen it. I’m going to justify my position with two pieces of evidence. The first is a fact about the creation of the movie; the second is a piece of dialogue from the movie that Fulci says himself.

According to the IMDB trivia page for A Cat in the Brain, the original screenplay for this movie was 49 pages long and contained no dialogue. It instead contained descriptions of various mutilations and attacks along with descriptions of sound effects that should accompany them. That was literally the entire point of this movie when it was conceived.

If that’s not enough to convince you that this movie exists only to show clips from earlier Fulci movies, at one point, our intrepid director has a conversation with an actor portraying a Nazi rapist. After the conversation, he mutters to himself, “Sadism. Nazism. Is there any point any more?”

There isn’t. A Cat in the Brain, despite that kick-ass poster and great name, despite containing enough gore to prevent it earning an R-rating, exists only to show crude, cheap gore effects. How depressing.

Why to watch A Cat in the Brain: How can you resist that title?
Why not to watch: It’s such a disappointment.