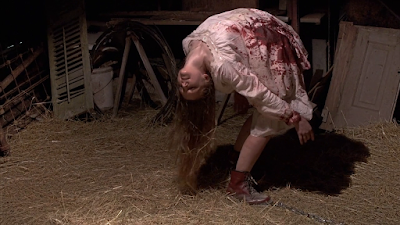 I wanted to like The Last Exorcism. I really did, even though on its surface it’s evident that it’s going to go somewhere that’s really going to bother me. There are a lot of great ideas in the start of this film and they are carried through, more or less, for the first two acts of the film. Everything falls apart in the third act, though, when rather than finding an interesting way to handle the end of the film, we’re dropped into a series of clichés that are, sadly, exactly what you’d expect from a film called The Last Exorcism.

Reverend Cotton Marcus (Patrick Fabian) is a fire and brimstone preacher in Baton Rouge from a long line of preachers. The difference with Cotton is that he’s not merely started to have doubts, but has embraced those doubts and wants out of the ministry. Rather than simply signing up for The Clergy Project, he decides to call in a film crew to openly display his lack of faith. In fact, he wants to provide a clear demonstration of just how wrongheaded he now finds his earlier beliefs. What he wants to do is accept a random plea to perform an exorcism, demonstrate that it’s all smoke and mirrors, and then go on with his life.

In the presence of cameraman Daniel (Adam Grimes) and crew Iris (Iris Reisen), he grabs a request at random from his desk and turns up the case of Louis Sweetzer (Louis Herthum), who makes exactly the claims that Cotton has predicted. Louis’s daughter is possessed by something demonic, and the livestock are dying. Cotton and his crew head south in Louisiana to find the Sweetzer farm. What we learn is that Louis lost is wife to cancer a few years earlier and has gone both hardcore fundamentalist and functional alcoholic. He’s pulled his kids, Nell (Ashley Bell) and Caleb (Caleb Landry Jones) out of school in favor of homeschooling and has also pulled them out of the local church in favor of his own teachings.

As for Nell, she seems completely normal in most cases, but does show some evidence of mental and emotional trauma, likely related to the death of her mother, with whom she was close. Cotton performs his “exorcism,” confident that the family’s faith and the smoke and mirrors will shock Nell out of her delusion. However, that night, Nell shows up at his hotel room, clearly in an altered state. Cotton, Iris, and Daniel rush her to the nearest hospital where she checks out as fine. They also discover that Nell, regardless of her claims of being a virgin, is pregnant.

Naturally, incest is suspected, with Iris being the strongest proponent for this. Nell eventually confesses that she is not a virgin and that the father is a local boy named Logan (Logan Craig Reid). As it turns out, though, Logan claims not to really know Nell, and also claims to be gay. Further, he mentions that he knows Nell only from a party thrown by local minister Pastor Manley (Tony Bentley), who claimed earlier that he hadn’t seen Nell in several years. Suspicious of what is truly happening, they return to the Sweetzer farm for the cliché-ridden finale.

And that’s the problem with The Last Exorcism. It follows the tried-and-true horror movie rule that anyone who begins the film as a skeptic, non-believer, or someone who has lost his or her faith will find reason to rekindle that faith by the time the film ends. Actually, that’s not true of just horror movies; it’s true of movies. It’s the basis for virtually every Christian-themed movie ever made, but it also makes an appearance in films like Independence Day. The skeptics, who tend to be right in the real world, are uniformly wrong about anything supernatural or spiritual in film.

I should expect that, really. In truth, aside from shows like Mythbusters, the only real skeptical television show in the history of television seems to be the original run of Scooby-Doo, where the creep or ghoul or ghost was always unmasked and demonstrated (usually) to be someone faking a scare for financial gain…just like superstition peddlers in the real world.

I really wanted to like The Last Exorcism. It started with such promise and managed to keep that promise going for most of the film. It could have come to a much more suitable and satisfying end instead of the one we get, and it would have improved the movie in so many significant ways. Instead, we get the same tired crap that we always get. And to make matters even more insulting, there’s a sequel, so clearly, this wasn’t even the last exorcism.

Why to watch The Last Exorcism: It starts so well.
Why not to watch: It ends with clichés.