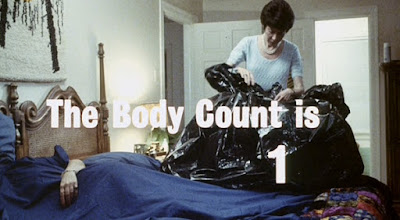 When I look at a film like Student Bodies, I think there are only a couple of possible reasons it exists. The year before it was released we got Airplane!, a genius film that contains at least two jokes on screen at every moment and frequently more than that. It was perhaps natural then that Student Bodies would be released, since it appears to be Airplane!, but a horror movie instead of a disaster movie. There is clearly an attempt to make this far more of a comedy than it is a horror movie. There’s nothing like gore or even blood here. There’s a moment in the middle of the film where the producer, sitting at a desk, swears at the audience so that the film can earn an R-rating.

The idea here is exactly that, though—it’s a movie that desperately wants to be the Airplane! of horror movies. Nothing is serious, everything is played for a joke, and every character on screen is uniquely stupid in real ways. The issue is that beyond the idea of doing a spoof of slasher movies, virtually nothing here works at all.

The reason that Airplane! works as well as it does is that it’s brilliantly written and has a very strong cast all the way through. Not all of the jokes work, but there are so many of them that there’s almost always something funny happening all the time. That’s not the case with Student Bodies, which plays far too long with the jokes it tries to land. The characters in Airplane! are parodies and extreme, but not overtly stupid. Everyone in Student Bodies is really dumb in the way that characters in the typical “parody” film are stupid. There’s not a lot of pleasure in watching buffoons act like buffoons.

There’s not so much a plot as there is a series of events that are kind of loosely connected. Toby (Kristen Riter) seems to always be around when people get killed. Specifically, the people getting killed are teenagers having sex. The girl in this situation is always killed in a ridiculous way (beaten to death with a bookend, killed somehow with an eggplant, stabbed to death with a paper clip) while the guy is killed by being put into a black garbage bag while they are still alive, which they are unable to get out of and presumably suffocate.

That’s the level of the film. We’re not going to get any smarter than that from anyone. All of the characters are cartoon-level parodies and everyone is an idiot. And I could live with that, since that kind of thing can work, but Student Bodies really doesn’t.

I’d be willing to forgive a lot of this, even all of this if Student Bodies managed to be funny, but it doesn’t. That’s got to be the biggest possible sin for a movie that bills itself as a comedy. That it calls itself a horror movie and isn’t scary is slightly more defensible in this case because it wants to be a comedy far more than it wants to be a horror movie. No, Student Bodies is clearly making fun of horror by being not scary at all, but it does this by being not funny, and that’s a problem.

It’s also completely disingenuous in how it bills itself. Student Bodies claims to be the first horror comedy, conveniently forgetting movies like Abbott and Costello Meet Frankenstein, Young Frankenstein and The Comedy of Terrors. None of those movies were particularly scary and didn’t really intend to be. They were, however, at least in the neighborhood of comedy even if they weren’t laugh-out-loud funny (although Young Frankenstein clearly was).

There are really two ways to do a horror comedy. One way is to make the movie both funny and scary. There are tons of great examples of this from Evil Dead II to Slither to Tucker and Dale vs. Evil with dozens of other classics (and yes, I realize I haven’t mentioned Shaun of the Dead, the single greatest horror comedy ever made). There are so many examples. The other way is to make it funny with the pretense of horror. This is where Student Bodies tries to go, but it fails by being genuinely unfunny.

There is one thing that desperately attempts to redeem Student Bodies. It doesn’t, but it comes the closest. That one thing is the presence of The Stick, freakish actor Patrick Varnell. The Stick, who was a physical wonder—about 10 feet tall, rail thin, blessed/cursed with gigantic hands, equally blessed/cursed with joints that seem to all be ball joints—is the only one who seems to be actually trying to make this movie funny. He fails more often than not, but at least he’s trying.

Look, pretty much no one who was involved with this movie did much else in this industry. While Mickey Rose wrote a great deal, this was the only movie he ever directed. Michael Ritchie directed a bunch of other movies, but this is the one he chose to do as Alan Smithee. Even The Stick has only one other IMDB credit. And that might be the saddest part of this whole thing.

Why to watch Student Bodies: Watch it for The Stick.
Why not to watch: It defines amateur.