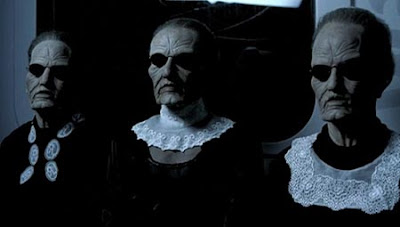 One of the joys of watching horror movies from the past is that you can sometimes see someone at the start of his or her career. Think Johnny Depp in A Nightmare on Elm Street, for instance, or perhaps Kevin Bacon in Friday the 13th. It’s a lot more fun when it’s someone who ends up with a great career but appeared in some terrible early horror films—Mila Kunis in American Psycho II, for instance. So when an odd little horror movie has an established cast, I find it fascinating. Darkness, a relatively unknown film from 2002 has a surprising cast, and these are not unknowns. Featured in this film are Anna Paquin, who had won an Oscar a decade previous; Lena Olin, Oscar nominated in the previous decade; and Giancarlo Giannini, nominated back in 1975. An Oscar winner and two nominees in an unknown, amateurish horror film. That’s pretty exceptional.

It took me longer to get this film than I would have liked. I ordered it through interlibrary loan and was sent the wrong film. Instead of Darkness from 2002, I was sent The Darkness from 2016. Oh, those wacky librarians!

Anyway, Darkness is in many ways a pretty standard potboiler horror movie. It’s got exactly the sort of plot that you expect once the movie gets started. It bears some similarity to pretty much every other haunted house film ever made, and also shows some connection to movies with a heavy satanic influence. So, it’s going to be that movie—family moves into a house with a dark past to which they have some connection in one way or another.

In this case, we have an American family (sort of?) moving to Spain into a house that has been unoccupied for 40 years. It is coincidentally 40 years after the disappearance of six children at the house during an occult ritual that took place during an eclipse. Moving into the house are Mark (Iain Glen, immediately recognizable to any Game of Thrones fan as Jorah Mormont), his wife Maria (Lena Olin), and kids Regina (Anna Paquin) and Paul (Stephan Enquist). We soon learn some important facts. First is that Mark has been ill with Huntington’s Disease that has somehow been treated despite the fact that there really isn’t any clear treatment for it. Mark is now under the care of his father, Albert (Giancarlo Giannini).

What we’re going to get is pretty much what you expect we’re going to get. The house immediately appears to be haunted. The power cuts out frequently and Paul starts being afraid of the dark, mostly because he gets visions of children and hears their laughing. It’s Regina who is going to do at least some investigating with her friend Carlos (Fele Martinez). The history of the house slowly comes to light here, as the house itself becomes darker and darker (both literally and figuratively) and another eclipse—one that occurs every 40 years—comes closer and closer.

I’ll say this for Darkness: the big reveal does have a pretty great moment in it that is actually surprising. It goes in a direction that was certainly possible with the movie as it was presented, but that I didn’t expect at all. I appreciated that quite a bit. That and the stellar cast from top to bottom (I freely admit that I am a huge fan of Lena Olin) are the pleasures to be had in Darkness.

Aside from that one moment, there’s not a lot here that isn’t predictable. Once the actual plot is more or less set forth, a great deal of what happens is predictable. We’ll see people act in particular ways that we will understand means one thing but everyone in the film with see as meaning something different. As everything winds up, it becomes extremely predictable, even working that twist moment into the predictability that follows.

Darkness innovates in only one particular place: it gives us something more annoying and brain-melting than shaky-cam. There are moments in this film that are not filmed in shaky-cam, but something much more akin to the camera being placed on a paint shaker. These are like shaky-cam shots except that the camera isn’t following action; it’s stationary, but is moving rapidly up and down. It’s like certain scenes were filmed during earthquakes.

Despite its tremendous cast, Darkness is pretty much a waste of time. You’ll get a much better version of very much a similar story with El Orfanato, which also has a better resolution and a much better twist.

Why to watch Darkness: A cast that the film doesn’t really warrant.
Why not to watch: We’ve discovered something more annoying than shaky-cam.