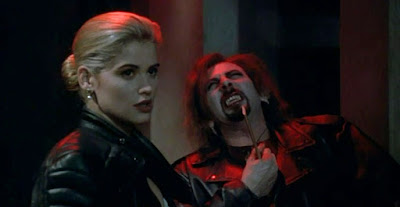 Everyone has holes in his or her viewing history. A lot of those holes will never be filled, of course. There are just too damn many movies for anyone to see them all. That being said, there are some viewing holes that are more embarrassing than others for any number of reasons. For me, one of the big holes I had until now was Buffy the Vampire Slayer. Chalk it up to timing. My wife doesn’t like anything that smacks even a little of horror and in 1992, we were recently married. That’s going to make it tough for me to see it.

Anyway, Buffy is far more well known as a television show than it was as a movie, even if the movie came first. Still, it’s pretty well beloved, so I felt like I was missing something by not having seen it. After all, it’s alleged that Buffy the Vampire Slayer is everything you want in a horror comedy, right? It gives us an ass kicking female protagonist who is substantially different from the stereotype. In this case, our undead slayer is a bubble-headed cheerleader (at least initially). That’s the sell here—rather than a classic warrior against the undead, we get the leader of the cheer team.

The movie creates the legend that over the centuries there has always been a chosen one who is tasked with fighting vampires to the best of her ability. This chosen one (eventually) dies and the mantle passes to someone else. Throughout the years, the slayers appear to have been dealing with the same main evil vampire over and over. At the very least, his assistant has been around for 1200 years, which certainly implies that our big bad has been around for longer.

Anyway, one day out of nowhere, high school senior Buffy Summers (Kristy Swanson) is approached by Merrick (Donald Sutherland), who is tasked with training her to fight the undead. Naturally she doesn’t believe him at first until he demonstrates that the undead actually exist. Buffy isn’t really a fan of being the chosen one, especially since her training has started so late, allowing her to develop her frivolous personality. She does eventually figure out that she is needed to stop the evil, even if she’s not really ready for it. In this case, that evil is named Lothos (Rutger Hauer), the vampire who has evidently been plaguing humanity for more than a millennium. Lothos is assisted by Amilyn (Paul Reubens), while Buffy is eventually helped out by Pike (Luke Perry), who has lost his best friend Benny (David Arquette) to the vampires early on.

In all honesty, the premise is absolutely the best part of Buffy the Vampire Slayer is the premise. The idea of a bubblehead stepping up as the latest incarnation of badass warrior is funny on its face. And the movie does absolutely nothing with it. Buffy starts out resisting the fact that she is the new incarnation of the vampire killer, but quickly figures out that she is needed and that all of her friends (one of whom is played by Hilary Swank) are airheaded as well. What started as the gag that should have carried through the entire movie is essentially ignored about halfway through.

The second best part of Buffy the Vampire Slayer is the cast. Seriously, Donald Sutherland, Rutger Hauer, and Paul Reubens should be enough to sell watching the film, but having Stephen Root as the principal is great casting. In addition to Hilary Swank, there are uncredited roles for Ben Affleck, Seth Green, and Ricki Lake. That the film ends up not doing a great deal with most of them is beside the point of them being there in the first place.

Really, though, this was a huge letdown for me. The jokes, some of which might have landed in 1992, really don’t track that well today. Some of the jokes certainly didn’t land back then, at least for anyone who wasn’t watching half-baked. Perhaps that was my problem; I should have blazed away while watching, despite not being that guy at all.

I was really disappointed here. I expected this to be a lot of fun and at least good for a few laughs and it really wasn’t. Buffy isn’t that interesting of a character in the film. She’s too much of an airhead at the start, and her transition into being more serious doesn’t work at all. I have no reason to buy her as a more serious person, so I don’t. The final confrontations aren’t that fun or funny, either. In fact, they don’t make a lot of sense. The relationship between Lothos and Buffy is never really explained. She’s somehow connected to him and she needs to be prepared to face him, but she does at one point and he tells her she’s not ready. Ready for what? She’s his sworn enemy, but he can’t kill her yet because…reasons? It feels like 15 minutes of important exposition got removed from the shooting script.

I’m disappointed. It’s possible that the genuine love people have for the television show caused me to expect too much here. For whatever reason, Buffy the Vampire Slayer doesn’t come close to living up to what I’d been led to believe it should be.

Why to watch Buffy the Vampire Slayer: It’s a new take (kind of) on vampire myths.
Why not to watch: Some of the humor feels misplaced.