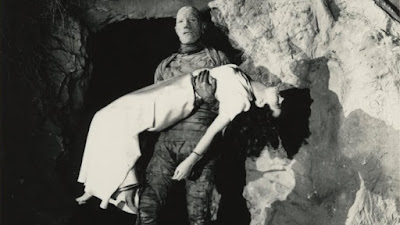 My friend Dawn is a librarian at the public library in the town just east of where I live. The Cortland Public Library is tiny, just two rooms, but it’s got a fantastic movie collection in no small part because of Dawn’s work. For the last few months, Dawn and I have had a movie night on the first Saturday of the month. She brings snacks, I bring beer, and we invite the public. We ask for a $1 donation, the idea being that we’ll use that money to help improve the library’s movie collection. Well, we made our first purchase recently—the entire Universal monster collection. It hasn’t even been put into the catalog yet, but they let me walk out with the Mummy collection—three discs holding six original movies. It’s good to have connections, after all. I’ve seen the original, of course, so I took this opportunity to start watching the rest of the series, starting with The Mummy’s Hand.

This is pretty standard stuff, and like many of the early horror movies, it’s barely long enough to qualify as a feature-length film. It comes in at a mere 67 minutes, which is just to give us a plot, a few close-ups of the mummy in question (Tom Tyler) and the obligatory romance that isn’t really necessary but seems to be a part of every film of this era.

What I find particularly interesting is how much this film, the first sequel to the original film, influenced the 1999 remake. The names are changed, of course (it’s Kharis instead of Imhotep, for instance), but a lot of the story is the same here. Kharis’s love Ananka died and, grief stricken, he attempted to revive her with forbidden knowledge. As punishment, Kharis was buried alive with his tongue removed. But, of course, Kharis isn’t really dead.

Another similarity to the remake from this is that our treasure hunter, Steve Banning (Dick Foran) and his partner Babe Jenson (Wallace Ford) find a clue to the location of what they believe to be Ananka’s tomb only to have it destroyed by Andoheb (George Zucco), who doesn’t want them to find the tomb. Undaunted, Steve and Babe team up with traveling magician Solvani (Cecil Kellaway) to finance an expedition. Of course, they find Kharis’s tomb, Kharis is awakened (by Andoheb), and hilarity and mummy attacks ensue.

The Mummy’s Hand is, of course, completely ridiculous. Our romance is going to be between Steve Banning and Solvani’s daughter Marta (Peggy Moran). The mummy is brought to something like life and manages to strangle a few people before the film ends. It goes exactly where you think it’s going to go, and does so as efficiently as possible.

While the movie is hard to take seriously in general, there are some really good effects here, especially for 1940. Evidently, for close-up scenes, Tom Tyler’s eyes and the inside of his mouth were blacked out frame by frame to make him appear more unworldly and menacing. It’s surprisingly effective, as is the makeup on Tyler’s face, apparently done with a painstaking process of applying strips of cotton to his face.

The biggest problem with The Mummy’s Hand is that it’s just too damn short. There’s a lot that could be expanded here to get this to a running time more like 90 minutes, which is what the story could really use. It winds up far too quickly. That’s very much the style of the time, though. What should be a good 15 minute resolution takes more like 5, and the final denouement is like 30 seconds, a scant coda that almost doesn’t register. 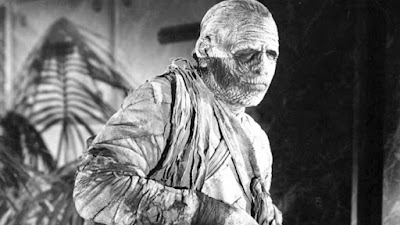 What we didn’t learn in the The Mummy’s Hand is that the film was evidently taking place in the years before World War I. We learn this in the next movie, The Mummy’s Tomb, made a couple of years later, but taking place 30 years after the first sequel. Steve Banning (Dick Foran) is still around, but much older, and as the film starts, he is reminiscing about his previous adventure searching for Ananka’s tomb. He’s telling this story to his son John (John Hubbard), John’s girlfriend Isobel (Elyse Knox), and his sister Jane (Mary Gordon). In fact, the first 10 minutes of the film, which runs just over 60 total, is clips of the previous movie. We also learn that Marta has died, so evidently Peggy Moran’s agent got her out of this one.

If The Mummy’s Hand was silly, The Mummy’s Tomb beggars the imagination for just how goofy it is. The High Priest (Eduardo Ciannelli) who appears in the previous film as an ancient man about to die and who existed only for exposition is somehow still alive in this film, 30 years later, and still trying to keep Kharis alive. This time, the plot revolves around reviving Kharis once again and having him kill off the Bannings for daring to define his tomb.

For a wonder, our first victim is Steve Banning himself, which means that we’ll be following his son as Kharis comes out of his sarcophagus to hunt down other members of his family. Banning’s murder is going to bring Babe out of the woodwork. Inexplicably, his last name has been changed to Hanson, but he’s still being played by Wallace Ford. He’s convinced that the mummy is back, and of course he’s right, but Kharis is going to get him before he can really get anyone else involved.

It’s interesting to me that Universal evidently couldn’t get anyone to really commit to playing the title monster. This is the third movie in the series, and it’s the third person playing Kharis. This time, the role is being handled by Lon Chaney Jr., who gives us a much beefier mummy, although still plagued by the gamey left leg and more or less crippled right hand.

While The Mummy’s Tomb is significantly goofier than the previous film, there is a significant improvement from the the Mummy’s Hand. That is the presence of Turhan Bey as Mehemet Bey, the new high priest who revives Kharis and continues to keep him revived to enact their revenge. There was nothing really wrong with George Zucco in the previous film, but Bey looks the part of an Egyptian, and lends an air of authenticity to the proceedings.

As with The Mummy’s Hand, The Mummy’s Tomb is far too short. In this case, it’s just over an hour long and a good chunk of that is pulled from the previous. While the plot is just as silly, it takes itself a great deal more seriously. Babe is no longer comic relief. In fact, there’s no comic relief here. It doesn’t deserve or need the serious tone, but it love that it plays it completely straight.

Why to watch The Mummy’s Hand: It’s a short version of the 1999 remake of the original in a lot of ways.
Why not to watch: It’s far too short and far too goofy.

Why to watch The Mummy’s Tomb: Lon Chaney Jr. always played a good monster.
Why not to watch: If it were any shorter, it wouldn’t hit feature length.