Film: 1408
Format: DVD from personal collection on The New Portable. 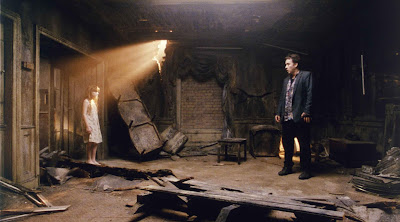 Once upon a time when I podcasted regularly, I watched 1408 because Nick Jobe picked it for me to watch. I remember liking it; I can’t remember if I picked up a copy on the cheap because I had to watch it or because I had just watched it, but nonetheless, I do own a copy. But there’s a reason that I rewatch films I’ve seen before to review them. I completely forgot that, like virtually every movie in history, 1408 has no idea how to really write a skeptic character. Honestly, the makers of Scooby-Doo got it right and no one else understands that skepticism and cynicism are not the same thing and that it’s possible to be a skeptic without suffering some major loss in the past.

For what it’s worth, that does genuinely damage my opinion of the movie. As someone who considers himself a skeptic and who does not consider himself a cynic, it bothers the hell out of me. It is the philosophical equivalent of racial profiling, something especially true since the skeptic label is paired with atheists more than with anyone else. What this means is that 1408 is yet another film where our central atheist has become a non-believer not because of rationality or philosophical inquiry but because he or she (he in this case) got mad at God, and specifically the Christian god. Look, the philosophical position isn’t hard. Get it right.

Our skeptic here is Mike Enslin (John Cusack). Once upon a time, Mike wrote a novel and had what seemed like a promising career as a novelist. What happened instead was that his daughter Katie (Jasmine Jessica Anthony) was diagnosed with cancer and slowly wasted away. As happens all too often, this put too much of a strain on his marriage to Lily (Mary McCormack). The two end up divorced and separated by the width of the country. It should not be a surprise at this point that Mike’s reaction is to lose any faith he might have had. He becomes a cynic and bends his writing skill to investigating “haunted” places. Despite the evident popularity of his ghost hunting books about haunted places, book signings don’t attract much of a crowd—another given reason for his cynicism. Due to the loss of his daughter, Mike Enslin’s quest has been to find evidence of anything after death, and so far, his quest has been unsuccessful.

This is when he is alerted to the presence of the Dolphin Hotel in New York, a hotel with an allegedly haunted room, the eponymous 1408. Because of what he now writes and because of his terrible need to either confirm or debunk paranormal claims, he attempts to book the room. He is refused. Eventually, he enlists his editor (Tony Shaloub), who puts the legal department on the case. Faced with a potential lawsuit based on an obscure discrimination ruling, Mike is allowed to book the room.

When he arrives at the Dolphin, Mike is greeted by hotel manager Gerald Olin (Samuel L. Jackson), who does everything he can to dissuade Enslin from staking in the room, up to and including a bribe of a bottle of very expensive cognac. No matter the bribe, Enslin wants the room. This is despite his own research as well as Olin’s insistence that there are multiple additional deaths in the room that were attributed to natural causes and that no one has stayed beyond an hour. This is also despite Olin’s personal story of a maid who became locked in the bathroom and blinded herself.

So, in we go, and the creeps start happening. I’m not actually going to talk too much about what happens inside the room. There are some really good moments here and some that come across as more than a little cheap. The clock radio going off at opportune moments playing The Carpenters’ “We’ve Only Just Begun” is a great touch, for instance.

But here’s the thing—despite the fact that Mike Enslin has absolutely no history with the Dolphin Hotel or room 1408, you have to know that his daughter is going to show up here, right? There are going to be visions of past dead from the room and even some appearances of what seem to be tangible pseudo-phantoms. There are going to be issues with electronics and even what seems like time travel at certain points. And het, for all of this, 1408 really only has one place that it wants to go.

There are a couple of moments in the film where it makes a turn for the mindscrew. I enjoy that when it’s done well, and I’m of the opinion that in at least a couple of the various endings for this film (there are four, I think) could lead to exactly the same place. But really, where 1408 wants to get us is to the point where the skeptic is shown to be wrong for being a skeptic and the cynic mends his ways.

Honestly, I grow tired of this. I like 1408 about as much as I can. John Cusack is good in this, and Samuel L. Jackson is often a welcome presence in any film. I don’t like where it goes, though, because, like virtually every movie that includes a skeptic as a character, the film blatantly and severely misunderstands the skeptical position. Someone really needs to fix that.

Why to watch 1408: It does a great deal with one location and one character.
Why not to watch: As usual, Hollywood can’t write skeptics honestly.