Ten Days of Terror!: The Cottage 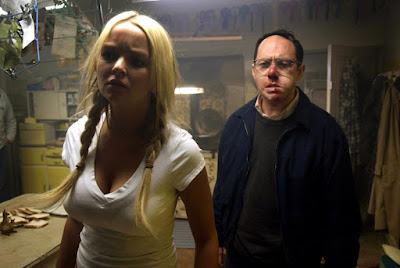 Horror comedies are hard to do well. Most of them spend far too much time on the comedy and not nearly enough time on the horror. In fact, there are a lot of them that more or less forget that they half of their name is “horror” and end up providing horror moments that are neither very scary nor very funny. The Cottage attempts to do something different in this respect. It follows a path a lot more similar to a movie like The Frighteners in which the first half is essentially a comedy film, with the second half being a slasher.

The Cottage starts as a crime movie. Brothers David (Andy Serkis) and Peter (Reece Shearsmith) have kidnapped Tracey (Jennifer Ellison), the step-daughter of a crime boss. They have gone out to the middle of nowhere to make their ransom demand. We discover eventually that David is familiar with the criminal underworld while Peter is not. The ransom will be split by David and Andrew (Steve O’Donnell), Tracey’s stepbrother. Rather than money, Peter will get the undisputed claim to his and David’s late mother’s house.

Tracey, it turns out, is quite a bit feistier than the two had planned. Since she knows David, it’s Peter who has to deal with her more, and on a first dealing, she manages to head butt him a few times and break his nose. Later on when talking to her to get some sort of compliance, he lets his brother’s name slip. Eventually, Andrew shows up with the ransom only to discover that the bag holding the ransom is filled with napkins rather than money, meaning that Tracey’s stepfather likely knew that Andrew was in on the whole scam, and we’ve learn that he has sent a couple of his goons along to get Tracey back.

Through a series of accidents and slapstick moments, David is forced to drive to the nearby town to make another call for a ransom. While there, he is confronted by a number of townspeople who warn him to stay in the house, keep the doors locked, and not to wander. David returns to the house to discover that Tracey has knocked Andrew out and has run off with Peter.

This takes us to about the midpoint of the film, and it’s here that the film changes dramatically. Once Tracey and Peter get to the “deserted” farmhouse, The Cottage stops being anything like a comedy and instead becomes a slasher with a number of moments of straight-up gore. It turns out that this isolated and desolate farmhouse is inhabited by someone known only as “The Farmer” (Dave Legeno), a man horribly mutilated in an accident and turned psychotic. From this point forward, The Cottage becomes a straight slasher with no more moments of comedy than a typical slasher movie. There’s also considerable gore from this point on.

That’s exactly the issue here. This is a difficult turn to make, and there aren’t a lot of movies that can do it well. The Frighteners, which I mentioned above, is one that makes the transition from horror-based comedy to more straightforward horror about as well as can be done. Behind the Mask: The Rise of Leslie Vernon is another. The shift in The Cottage is simply too much for the film to handle adequately.

This is not to say that The Cottage doesn’t have its charms; it clearly does. The first half of the movie is genuinely funny in places, mostly from the pure incompetence of the characters and just as much because of how Tracey turns out to be far more clever than they’d planned for and also a step away from being a psychotic.

The switch to slasher movie is far less entertaining and far less effective. Oh, there are some nice gore moments—a partial beheading, a foot sliced cleanly in two, a pickaxing or two, and even a spinal removal. By the time we’ve gotten to here, though, we’ve more or less given up on anything like the comedy pieces of the film. The only comedy comes from David’s exasperation with everything that has happened, and there’s not nearly enough of that.

The Cottage is far more an interesting idea than it is anything else. It doesn’t know what it wants to be, though. It’s not bad as a comedy and nothing special as a slasher. The real issue is that there’s no indication that it’s going to be a slasher until we get to the point where it suddenly is. That doesn’t work, and that’s very much why the film itself doesn’t work that well.

Why to watch The Cottage: It has moments that are genuinely funny
Why not to watch: It has no idea what it wants to be.