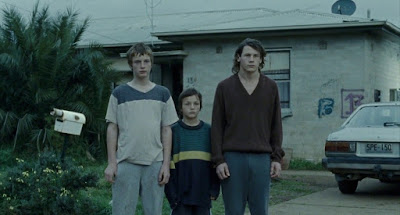 Horror movies come in any number of varieties. One of the clearest distinctions is between movies that are based in the supernatural and those that are based more in reality. A movie like The Silence of the Lambs is clearly horror and purely within the realm of possibility, which makes it that much more terrifying for me. Contrast that with, say, A Nightmare on Elm Street, which is terrifying in the moment, but then stops affecting me the moment the movie is over. Snowtown, also known as The Snowtown Murders is very much a film of the first variety. In fact, this is based on a real case of the most notorious serial killer in Australia and the young man who he influenced.

That summary really is what Snowtown is about; the rest is really just the details. Those details focus on Jamie Vlassakis (Lucas Pittaway), a young man who lives in poverty with his family in a poor suburb of Adelaide, Australia. His mother (Louise Harris) does the best she can, which honestly isn’t that great for her kids. Need evidence of this? At one point, Jamie is raped by his older brother Troy (Anthony Groves) and her boyfriend takes indecent pictures of all three of her sons. A gay, cross-dressing neighbor named Barry (Richard Green) introduces her to John Bunting (Daniel Henshall).

John Bunting soon becomes a father figure to Jamie. A part of that quickly is Jamie being a part of John’s personal crusade against pedophiles and homosexuals. John is somehow aware of Troy’s actions against Jamie, and, in his own rather terrible way of attempting to help Jamie, presents him with a gun, and then demands that he practice with it by shooting his dog. That sort of violence is the precursor to what will soon be happening.

Barry, the man who first introduced John to Jamie’s mother Elizabeth, disappears soon enough. Also disappearing is Gavin (Bob Adriaens), Jamie’s drug-addicted best friend. Their fate becomes known soon enough when Jamie is show the bodies of both Barry and Gavin in the garden shed. While Jamie attempts to react to this, he can’t really get out from under John’s influence. His brother Troy is the next victim, and after a brutal torture session, Jamie kills him out of mercy, now completely desensitized to the violence of John’s world. The murders continue, with the bodies being stored inside the vault of an abandoned bank in the nearby town of Snowtown.

The real criminals involved in this case were eventually captured. The body count was just about a dozen victims and took place over seven or so years. There didn’t really seem to be anything connecting the murders aside from Bunting’s claim that the victims were pedophiles, homosexuals, or weak in some way—Gavin’s drug addiction being an example of this. The Snowtown killings were the trial of the century for Australia, making this film inevitable, probably.

What makes Snowtown work is that it so subtly and quickly slides into this horrible brutality without there being any indication that it’s about to happen. The rape of Jamie by Troy happens out of nowhere. John’s demand that Jamie shoot his dog happens out of nowhere. And suddenly, the film has a body count. And then we have a truly brutal torture sequence of Troy, who ends up brutalized and bloodied and barely recognizable. And the path to that point is a slippery slope that just happens as the events play out. They feel both terrible and inevitable in some ways.

On my end, the problem with Snowtown is that there isn’t a lot more to say. While there is a level of brutality here that feels less nasty than in some films, it is worse because a great deal of this seems to come from the real story. The performances are good in that they don’t always feel or even look like performances, but appear to be real people (real, highly-disturbed people) going through their terrible lives.

Snowtown is a hard film to recommend, though. The film ends rather suddenly in what appears to be the middle of another killing. We get a summary of what happened afterward. For those who were familiar with the killings, this probably makes good sense. For the non-Australians among us, this feels very unsatisfying.

Snowtown is interesting and disturbing, but it ends abruptly, which makes it a bit hard to honestly recommend.

Why to watch Snowtown: It is both vicious and terrifying.
Why not to watch: The resolution happens in a way that feels rushed an unsatisfying.