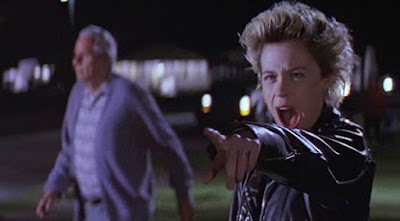 One of the first movies that I can think of that scared the hell out of me was Invasion of the Body Snatchers, the first one, which I saw when I was a kid. It’s a great set up for a film, and one that is so effective at what it does that the idea of “pod people” has entered cultural consciousness. Even if you’ve never seen any version of this story, you probably know what a pod person is. It’s one of the most adapted non-Shakespeare stories around in the sense that it has been done as a direct version of the book four times. Body Snatchers is the third version of the story, and while it doesn’t have the power or impact of the original or the first remake, it’s better than you might guess and far better than its obscurity would indicate.

One of the main selling points of the book by Jack Finney is that the base story and the concept of pod people is endlessly adaptable. In the 1950s, the original version of the story was accused of being both pro-communist and pro-McCarthyism. The 1970s version played in a similar sandbox, working at least in part as Cold War allegory. This third version in the post-Reagan years, seems to attack military culture in a world were enemies were suddenly fewer and further between.

The Malone family arrives on a military base in Alabama. Dad Steve Malone (Terry Kinney) works for the EPA and has been sent to the area to run tests to check on the military’s effects on the local environment. Since he’ll be there for some time, he decides to bring along his family. This means that wife Carol (Meg Tilly) and young son Andy (Reilly Murphy) will be along for the ride. Our focus, though, will be Steve’s daughter Marti (Gabrielle Anwar), who is from his first marriage. Marti’s not a fan of life on the military base, but she immediately finds a friend in base wild child Jenn Platt (Christine Elise), daughter of base commander General Platt (R. Lee Ermey) and his drunk wife (Kathleen Doyle).

The Malones are arriving on the base just as the invasion has started. We know this because there’s evidence of pod people already on the base. As the invasion spreads, Marti seeks solace in the companionship of helicopter pilot Tim Young (Billy Wirth) while her father is addressed by the base doctor, Major Collins (Forest Whitaker) about people being afraid of sleeping. I’m assuming here that you’re familiar with at least the basic story. If you are, there are no surprises in what is happening. Soon enough, pod people are everywhere, even in the Malone house with the takeover of Carol. And then the panic and the flight, and the desperate attempt to destroy the pods before the end of the film.

There are some things that Body Snatchers does really well, especially in the first half of the film. One of the best moments comes when Andy is in daycare and the kids are all producing a painting as an art project. When time is up, they all hold up their pictures, and all of them (except for Andy’s) are identical. It’s a great creep moment, just off-kilter enough to be disturbing without being gross or creepy.

It’s also got a good cast. Terry Kinney is a respectable actor, and Forest Whitaker is an Oscar winner. Meg Tilly is Oscar-nominated, and R. Lee Ermey is a damn legend. All of that said, it’s really Gabrielle Anwar at the center of the film. Film nerds will know her mostly as the woman who dances with Pacino in Scent of a Woman; To me, she will always be Michael Westen’s trigger-happy Irish girlfriend in Burn Notice. Anwar has always looked a little younger than her age, and she believably plays 16 or 17 as a 23-year-old.

Where Body Snatchers falls is in the license it takes with the story. I expect that there will be some new things or changes to the base mythology of the pod people. In the first remake, for instance, we got the horrible scream when the pod people have dominated an area and find a human. That’s not in the original and it’s not in Finney’s novel (which is worth reading). That’s not a huge problem for me. Like I said, I expect a few changes here and there. What I don’t expect is a change in the essence of what the pod people are.

See, the thing that makes the pod people scary is that they were undetectable. The only people who could tell the difference in someone who was taken over was someone who knew the person really well. Their speech and actions and reactions are identical and the only indication that there is a difference is a loss of emotions. This is what makes them so scary. Body Snatchers plays with this idea by making it far worse and far less scary. The case in point is Mrs. Platt. For the first chunk of the movie, she is clearly depicted as a blackout drunk. Then, suddenly, her glass is filled with water instead of vodka and she’s off to “play bridge” with neighbors despite not knowing how to play bridge. These are changes that Marti is able to see, and Marti doesn’t know Jenn’s mother than well. That shouldn’t be the case—she shouldn’t know at all.

Body Snatchers isn’t great, but it’s not bad. It’s better than its obscurity would have you believe. A good cast helps. While there is a moment of what might be the worst green screen work from the 1990s, overall, it’s interesting and has some disturbing moments that shine through hat becomes more or less a military movie with big of special effects pyrotechnics. You could do worse, but in the final analysis, it’s not a patch on the original or the first remake.

Why to watch Body Snatchers: A streamlined, updated version of a classic
Why not to watch: It plays too much with the way pod people are supposed to work.