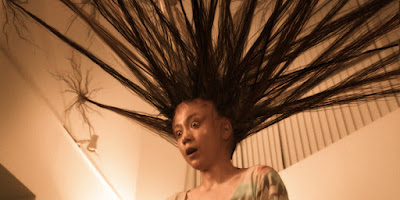 It feels strange for me, as one of the whitest people I know, to offer a lot of commentary on a film like Bad Hair. On the surface, this is a B-movie that in another universe would have been called Killer Weave rather than being the natural second film on a double bill with Chris Rock’s documentary Good Hair. It very much is a movie about a killer hair weave, and so it does have that sort of B-movie credibility (or lack thereof). But at the same time, Bad Hair has some social commentary that, for the whitest of white people and someone who rolled a lot of 7s when it came to privilege, is both surprising and obvious. In fact, some of it is so obvious that I can’t believe I didn’t twig to it already.

We start in the 1970s, where we are introduced to young Anna Bludso (Zaira Kelley in this opening scene and then Elle Lorraine for the rest of the film), whose cousin Linda (Corinne Massiah, then Chante Adams) is relaxing Anna’s hair. But something goes wrong and Anna gtes burned by the lye relaxer and is left with a permanent scar on the back of her head.

We move forward to 1989 with Anna grown up and working at Culture, which is essentially BET, or an African American version of MTV (1980s MTV, when it was music videos and not Teen Mom in infinite varieties). We learn that Anna’s mentor Edna (Judith Scott) is being ousted as program manager by the very white station owner Grant Madison (James Van Der Beek). Grant has managed to convince himself that he knows more about Black culture than everyone else who works at Culture and has removed Edna in favor of Zora (Vanessa Williams), the first Black supermodel.

Anna, more or less fighting to stay employed, pitches a new show and herself as VJ for it. She’s told that the idea is a good one, but that she needs to update her image by getting rid of her more traditional hairstyle and going with a weave. She’s told to go to Virgie’s (Laverne Cox), and she does, and while the weave is painful, she endures it. She’s given a bottle of conditioner and is warned to never let the weave get wet.

Meanwhile, we’re introduced to Anna’s family. Her uncle (Blair Underwood) is a professor of something in either the literature or anthropology line. It’s suggested that his wife (Michelle Hurd) is also a professor or at least a PhD, and Linda is in school as well. This makes Anna something of an odd duck in this family of scholars. Of current interest to the family is the arrival of a book of ancient slave folk tales that Anna’s uncle says his mother used to tell. Among these tales is that of the Moss Haired Girl. This story is about a young girl who creates a wig for herself out of moss hanging on a tree only to learn that it’s not really moss, but witches’ hair that gain strength by drinking blood.

At this point, it’s obvious where things are going. There are some disturbing moments as we move through the second act and into the third. Anna, about to be evicted by her white landlord (Steve Zissis), is instead offered a deal to pay her rent another way. Defending herself, she stabs him, and her hair moves on its own accord into the wound and drains him of his blood. Something similar happens when she hooks back up with her ex Julius (Jay Pharoah), who has been two-timing her with Zora. There’s also a moment where the hair feeds off of Anna herself when she starts her monthly cycle. And soon, it’s evident that others who have gone to Virgie’s and gotten her weave are having the same issues with their hair.

The movie itself is not particularly surprising. Once it’s obvious what is going on and once we get the full version of the Moss Haired Girl read to us, it’s clear where the actual plot is going. We know what danger Anna is in and we know what is at stake. Honestly, it’s B-movie fare and that’s very much what is expected for a movie that, as I said above, was certainly called Killer Weave in another reality.

So let’s talk about the subtext here, which is a lot more interesting. A great deal of Bad Hair is overtly about Black culture being co-opted and appropriated by white people. The fact that a television channel dedicated to Black culture is owned by a white man is very much a part of this. It’s stated outright, though, that the parent company of Culture (which is eventually renamed Cult as it goes through its redesign) sees the channel as a loss leader, used to decide which elements of Black Culture are going to be made mainstream by the more MTV-like channel.

It’s deeper than this, though. When the book of folk tales arrives, Anna is skeptical of why everyone cares. Her uncle tells her that the tales carry a sort of truth, that they are a remnant of the history and science and beliefs of those people. Further, that people and races are subjugated by being told that their beliefs and science aren’t real, that the only true religion is the conqueror’s religion. And in a sense, that’s what is happening with Anna’s hair. She has to give up her natural hair and give in to the hairstyle of the dominant culture to move forward, and it just so happens that this hairstyle ends up sucking the blood out of everything it touches.

Seriously, that’s a lot more interesting than a weave infused with witchcraft!

Why to watch Bad Hair: The subtext.
Why not to watch: The actual horror isn’t as good as the underlying social commentary.