Ten Days of Terror!: The Pact 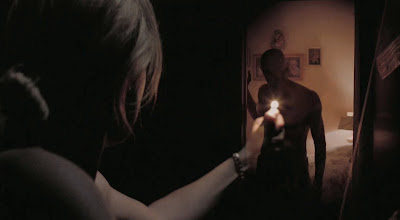 There is a difference between something in a movie happening for character-based reasons and something happening for plot-based reasons. Character reasons are always superior because they make sense in the larger narrative. Too often, writers write themselves into a corner and, to get to their desired end, are forced to have their characters make stupid decisions to get us to a scene or an ending they want. The Pact has this problem. While the movie offers some genuinely good scares and jump moments in the first two acts, the third act is rife with plot-based decisions that drop the film down a few notches.

I’m likely to get into spoiler territory with The Pact, so I’ll make sure I keep those moments after the jump, and I’ll probably provide a warning. The issue, though, is that there are a lot of problems with The Pact that come up once you stop for a moment and think about the film in its entirety. In most cases, those problems come from a desire to tell a particular story and don’t make sense in terms of the characters we have.

Nicole Barlow (Agnes Bruckner) is preparing for her mother’s funeral service. She’s also feuding with her sister Annie (Caity Lotz), who refuses to set foot in the house she grew up in again due to severe past trauma caused by their mother. Nicole then video chats with her young daughter Eva (Dakota Bright). Shortly after the call, Nicole disappears, which prompts Annie to show up. Also showing up is Liz (Kathleen Rose Perkins), who has been watching after Eva.

We’re going to get some weird goings-on now, starting with Eva having weird dreams and experiences while awake, and the disappearance of Liz. This introduces us to the local cop, Bill Creek (Casper van Dien), who takes on the case. After a few more bad dreams involving a decapitated woman, Annie starts investigating along with Bill. They discover a secret room in the house that had been blocked off. Still not able to find someone to really take her seriously, she contacts an old friend named Stevie (Haley Hudson), who claims psychic powers. And those powers pay off. She has an episode in the hidden room and starts screaming “Judas” over and over, and we get a vision of a woman in a floral dress. Without really revealing anything, Stevie leaves, causing Annie to start investigating.

What she discovers is an unsolved serial killer case known as the Judas Killer. So, if you think that all of these things are going to coalesce into the same essential plot point, you win the movie. The rest of the plot discussion needs to be under a spoiler tag.

What we learn is that Annie’s mother had a brother who, naturally, is the Judas Killer. And he’s still in the house, despite not having been active for years. And what’s more, he’s living in the crawlspace for some reason, and naturally he’s the cause of the recent disappearances. Why? Because the movie needs him to start killing again despite evident years of inactivity.

Oh, don’t get me wrong—this isn’t just a serial killer hunt. There’s a ghost in the house, too—the spirit of one of his victims, who is trying to get Annie to bring him to justice. And along the way, we’re going to have some really bad decisions made so that we can get to our final conflict. Briefly, here’s some of what happens in the final 20 minutes:

* Annie finds the body of poor Bill Creek, who was surprise murdered by the Judas Killer. Keep in mind that he was surprise murdered.
* Annie gets Bill’s gun while the killer is otherwise roaming the house because she’s managed to sneak into the secret room without him knowing. This is also despite the fact that she had a lit candle with her that she snuffs out. Evidently, he has no functioning sense of smell.
* When she makes a noise and he realizes he’s not alone, he starts looking for her. She knows there is only one way into the room where she is, and it’s a little hole he has to crawl through. So she hides because she can’t get the gun to work rather than grab something to beat the snot out of him when he crawls through.
* Naturally, he captures her. And he binds her and stashes her in a closet. Why? Because he always cries before he kills his victims and he has to evidently prepare for the murder. Compare this with the murder of Bill Creek.
* And, finally, while it doesn’t play into anything, once she finally shoots the bastard, she drops the gun right next to him.

There are some genuinely good moments in this film, and if it had stuck to being character-driven rather than desiring to get to that final confrontation, it would have been a good movie all the way through. Sadly, as it stands, The Pact is two-thirds of a good little horror movie and one-third bad decision making and worse writing choices.

Why to watch The Pact: Some quality scares.
Why not to watch: Plot over character.