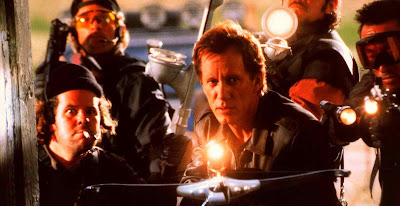 When we dip into the worlds of horror where monsters exist, we have to assume that a great deal of license is going to be taken by the filmmakers. For instance, with Vampires (also known as John Carpenter’s Vampires), we have to make the mental jump that not only do vampires exist, but that the Catholic Church is aware of them and has teams of vampire hunters that are financed by the church to hunt them down. One assumes that the Vatican in this world has to decide which parts of the money they receive gets used to kill vampires and which percentage is earmarked for protecting pedophiles from prosecution, but that’s beyond the scope of this movie.

Anyway, our team in question is headed by Jack Crow (James Woods), who was orphaned when his father was bitten by a vampire, turned, and then killed his mother. Jack managed to kill his father and was then made a ward of the church and raised to be a vampire killer. That he’s still alive and has managed to live to be as old as James Woods was when this film was made is a testament to the fact that he’s good at his job. While he and his team clean out nests of bloodsuckers (or “goons” as they call them), they are always on the lookout for vampire masters who control such groups.

Naturally, we’re going to start with the vampire hunting team kicking a little ass. We need something to get us into the world, after all. The team locates a nest of vampires in a nowhere part of New Mexico and spends the day dragging them out into the sun where they burst into flame. If nothing else, the opening scenes of the film have the single best and most entertaining method of killing vampires ever shown on film. The team pins them with pikes, shoots them with crossbow bolts that are hooked to a cable…which is connected to a winch. Once hooked on, they are dragged inexorably outside of the building where they explode into flame. It’s great because it makes sense and is incredibly inventive.

Anyway, the team kills off about nine vampires but doesn’t catch the master, which is troubling, since evidently a nest of this size requires one. And herein lies the beginnings of my problems with the movie. Knowing that there is a master vampire still on the loose, the team nonetheless spends the night boozing it up and cavorting with a gang of hookers under both the watchful eye of the local law enforcement and the team’s priest (Gregory Sierra). This is a huge disconnect for me. I don’t for a second think that Catholics are somehow above these “sinful” traits, but I do think it’s a stretch to think it might endorse or encourage them in the people who work for the church.

Even without that, the booze and sex party indicates a bigger issue. They know that the master vampire is probably still around, but they all still get stinking drunk anyway. So, when the master, named Jan Valek (Thomas Ian Griffith) shows up, their almost all too drunk to respond. Valek slaughters the entire team and all of the prostitutes with the exception of Jack Crow, his main assistant Anthony Montoya (Daniel Baldwin), and one of the prostitutes, Katrina (Sheryl Lee), who was bitten before the main attack. With his team dead, Jack and Montoya return to their base to speak to Cardinal Alba (Maximillian Schell!) and his assistant Father Guiteau (Tim Guinee) to regroup, but instead find out what Valek is after and go back to take him on, with Guiteau tagging along.

I love the idea of Vampires, but it’s so problematic in so many ways. I understand why all of this happened throughout. The slayers are set up as hard drinking, hard partying guys because of the nature of their work, and we need an excuse to kill them off. Jack Crow is painted as a profane individual with no respect for anyone or anything. But why? As someone raised by the church, why would he essentially become a nihilist? Every time one of the priests he works with invokes anything regarding religion, Crow reacts with something close to skepticism. Why the hell would he do that, and why would the church continue to use him?

The reason for this is easy. Jack Crow is set up as being a rebel and someone we’re supposed to like. We like people who stand up to authority. It’s why Father Guiteau is a stick-in-the-mud and were amused by the fact that Jack threatens and abuses him, and he only becomes a part of the team and someone we root for when he starts to take on more of Jack’s characteristics. The biggest issue like this needs to be under a spoiler.

The relationship between Katrina and Montoya doesn’t make any sense to me. The film starts with Katrina making a play for Jack and being attacked by Valek in Jack’s motel room. Jack takes her (despite her being bitten) since she can be used to track Valek. Soon after, though, it’s Montoya who takes an interest in her and, knowing she will turn, allows her to take a shower and clean herself up, falls asleep so she can try to escape and, despite the fact that he is an experienced vampire hunter, allows her to bite and infect him. I get it for the plot, but when you have to make your characters stupid for your plot to work, you need to work on your plot.

Why to watch VampiresThe single-best vampire killing method ever shown on screen.
Why not to watch: These experienced vampire hunters make a hell of a lot of obvious mistakes.