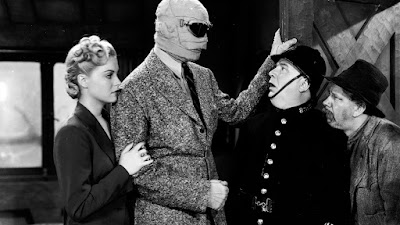 Of the great Universal monsters, it’s probably the Invisible Man who gets the least play, or is at least remembered the least. And yet, believe it or not, there’s a good half dozen films featuring, if not the actual character, at least the same basic concept. In the original, Claude Rains injects a concoction in himself that turns him invisible, but it drives him mad and fills him with a strange belief in his own supreme power. We’re going to tread on some similar territory in the sequel, oddly named The Invisible Man Returns.

Why odd? Because our original invisible man isn’t going to appear in this. What we are going to get is the brother of the original, Dr. Frank Griffin (John Sutton), who isn’t even going to be the main character here. Frank works as the doctor at a coal mine, evidently treating the miners. The mine is owned by a man named Geoffrey Radcliffe (Vincent Price), who happens to be on death row for the murder of his brother. The day of his execution, he is visited by Dr. Griffin, who somehow manages to get a syringe of the formula into the prison, which effects Geoffrey’s escape.

What we’ll get from this point forward is Geoffrey attempting to clear his name with the help of both Frank and Geoffrey’s fiancée Helen (Nan Grey). Pursuing him will be Detective Sampson (Cecil Kellaway). Standing in the midst of all of this is Richard Cobb (Sir Cedric Hardwicke), who appears to have an agenda regarding Helen. Cobb will become something of a foil here over time and Sampson is a good-natured foil, wanting to recapture Geoffrey but also wanting the truth of what happened. The biggest antagonist here, though, is the drug that rendered Geoffrey invisible, since it also renders the user prone to fits of madness and insanity.

It’s hard not to enjoy this film, even if it doesn’t really approach the levels of clear nuttiness that the first film did. One of the best parts of The Invisible Man is the unhinged performance of Claude Rains (unhinged enough that Mark Hamill based his Joker performance at least in part on Rains). We’re going to get only a mild form of that here, which is a shame since we learn eventually in Price’s career the levels of pure cinematic insanity he could rise to.

In truth, though, this is only barely a horror movie. It’s much closer to call this a mystery, since a great deal of the story is attempting to find out who is the real fiend behind Geoffrey being tossed casually into jail and onto death row. What is going to remain consistent from the first film is the level of the camera tricks here. This is good and entertaining stuff, and while today’s sophisticated audiences can almost certainly see all of the strings and the equivalent of them, these are surprisingly good effects for 1940. Yes, we’ll get a shadow or two and moments where we can see exactly how Price was removed from the film, but it still works so well. There’s a sequence near the end where he undresses a scarecrow that still looks pretty great.

It was perhaps inevitable that, of all of the Universal monsters, it was the Invisible Man who would be the first to be pulled away from his horror roots. The same year that this vaguely horror movie was released also saw the release of The Invisible Woman, a straight-up screwball comedy. This was followed by The Invisible Agent a few years later, turning him into a propaganda figure.

This is a fine film, but not a great one. I enjoyed watching it, but given the choice, the original is far better in almost every respect except for run time. We get an unaccountably strange happy ending with this film that it perhaps earns, but almost shouldn’t. Perhaps it gets away with this because Geoffrey, it turns out, is just a victim of circumstance and not the monster of the man in the original film.

Still, while it falls short of its roots, it’s worth tracking down.

Why to watch The Invisible Man Returns: This is probably the actual start of Vincent Price’s horror career.
Why not to watch: It’s about as scary as mild rash.