Ten Days of Terror!: Frankenstein and the Monster from Hell

Film: Frankenstein and the Monster from Hell
Format: DVD from Cortland Public Library on the new portable. 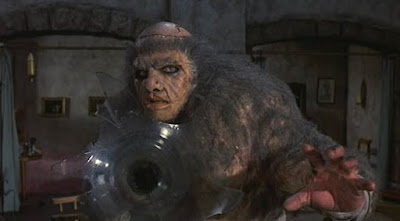 For some reason, Hammer horror films resonate with me. I like that they tried to maintain that idea of Gothic sensibilities for as long as they did while slowly ramping up the weirdness and violence of the films. Early Hammer certainly had some violence and some blood, but by the time the studio started to fade, they were getting more desperate, and thus were going to further extremes. Frankenstein and the Monster from Hell is a film that gives the 1970s gorehound everything they would want. There’s blood, there’s brains, there’s eyeballs, and even surgery. It may be ultimately tame by today’s standards (at least in terms of gore), but for the time, it was pretty out there.

Frankenstein and the Monster from Hell is very late in the Hammer pantheon, one of the last half dozen or so films the studio made until it was revived a dozen or so years ago. This means we’re going to go to some extremes here for the gore that will be on display. It’s almost quaint in the sense that in the year The Texas Chain Saw Massacre was released, Hammer was thinking that the height of horror was watching Peter Cushing and Shane Briant extract a brain from a corpse.

Dr. Simon Helder (Briant) is working from the texts written by Dr. Victor Frankenstein (Cushing, who will get here eventually) to restore dead flesh to life. Sadly for him, his graverobber is captured, which lead the police to him. Helder is convicted of sorcery and sentenced to an asylum for five years, an insane asylum where Frankenstein himself had been sentenced years earlier.

Simon is taken to the insane asylum and meets its director, Krauss (John Stratton), who seems pretty unhinged himself. Eventually, he meets the true power behind the throne, Dr. Victor, who is naturally Frankenstein himself. The sudden arrival of Helder means that he can turn over the care of many of the patients to Helder, allowing him to focus on the patients that really interest him, and, of course, his project. You get one guess what his current project is about. Assisting the two of them is Sarah (Madeline Smith), who is mute thanks to a terrible trauma that happened in her past.

Eventually, of course, Helder finds out what is going on. Frankenstein has been working on creating a new creature (David Prowse) using the body of a man who attempted suicide in the asylum. There’s also some evidence that he is killing off some of his patients for the raw material he needs for his new creation. Soon enough, Helder’s skill as a surgeon becomes far too valuable for Frankenstein to ignore and Simon becomes a part of the team.

All of this is going to slowly build to the film’s climax, which is going to happen in less than twenty minutes. Most (but not all) of the good gore is going to come in the lead up to this conclusion, though, which is more of a rampage by the monster. The biggest gore section of the film is not the surgery that involves replacing the creature’s eyes, but the brain removal scene. Essentially, Helder and Frankenstein are up to their wrists in a corpse’s brain pan for about five minutes extracting a brain. It’s tame by today’s standards, but it’s still pretty great.

What’s really interesting here is that there are other aspects of this film that go places that are genuinely surprising. This is a bit of a spoiler, but not really much of one (despite these revelations coming at the beginning of the third act). We learn that the trauma that caused Sarah to lose her voice was an attempted rape…by her father…who is Krauss, the head of the asylum; this knowledge is what gives Frankenstein so much power over the man. We also learn that Frankenstein wants to mate the creature…with Sarah, which would seem likely to take another one of her senses from her. This is genuinely creepy stuff, really transgressive in a lot of ways, and I love that this film went there. Despite that, what we have isn’t bad.

Why to watch Frankenstein and the Monster from Hell: This movie is surprisingly hardcore.
Why not to watch: The ending is really weird and abrupt.

Email ThisBlogThis!Share to TwitterShare to FacebookShare to Pinterest
Labels: Frankenstein and the Monster from Hell, horror, science fiction, Terence Fisher