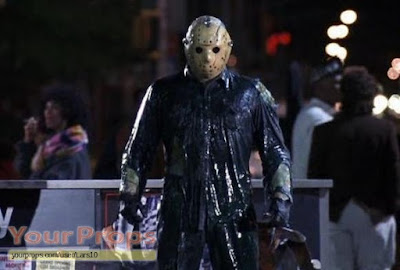 I would guess that if you are a fan of the Friday the 13th series, that you look on the aspects of it that are consistent from film to film as aspects of the franchise, not evidence of laziness. With Friday the 13th Part VIII: Jason Takes Manhattan, the only real difference we’re going to have is the venue. Otherwise, this is an extremely straightforward slasher where Jason kills a bunch of teens and a collection of adults in a variety of ways.

It’s worth noting right off the bat that this film is misnamed. Jason does not, in fact, take Manhattan. He eventually gets to Manhattan, but the entire first half or more of the movie (at least the killing parts) take place on a ship. We don’t get to New York until there’s well under halfway done.

As is usual for this series, we’re going to be short on plot. Jason gets awakened by a couple of kids on the water at Crystal Lake. Their anchor hits some electrical cables and awakens our boy Jason, who rises up, kills them both, and then more less rides on their boat that happens to be pointed exactly to the harbor where a group of students are boarding a boat for a combination trip to New York and high school graduation party. Naturally, Jason will be tagging along.

Our obvious final girl Rennie (Jensen Daggett) gets on the boat with her favorite teacher (Barbara Bingham) as well as with her guardian and complete asshole of a teacher, Charles McCulloch (Peter Mark Richman). Dr. McCulloch is going to be the real antagonist in this film, as Jason is more a force of nature than he is a true villain. We’ll have the boyfriend of our final girl in the person of Sean (Scott Reeves), and a bunch of cannon fodder that hits all of the regular base personality types without being interesting enough to name.

I’m going to be blunt here—there are a lot of problems with Jason Takes Manhattan. We can start with the fact that, as mentioned above, Jason doesn’t even get to Manhattan until we are well into the second half of the film. Once there, he doesn’t so much take the island as kill the people who he’s been chasing up to this point with a quartet or so of bonus kills of native New Yorkers before the end of the movie.

A much larger problem is just how frequently this movie decides to take a shit on the internal logic of the movie and the series. Jason is awakened, as he has been in previous films, by a jolt of electricity. So why, when he is dropped on the third rail of the subway, does the jolt of electricity temporarily knock him out? In reanimated dead guy terms, that should recharge him. In Dungeons and Dragons flesh golem terms, that should actually heal him.

That internal logic is even more sorely tested on the ship. Jason plays hide and seek with everyone, killing more or less when he feels like it rather than being the unstoppable killing machine that we know he is. Unless he can get people on their own and one at a time, he’s almost coy with his victims, even disappearing in the middle of an attack or two when someone else shows up, until it’s time for everyone to get off the boat. Eventually, when we get to New York, Jason is a lot more willing to be seen by groups of people. In fact, he walks openly down the street and rides on the subway without killing anyone.

Worse, Jason Takes Manhattan is a movie that doesn’t know when to end. Most of these movies are right around the 90-minute mark, with many being shorter than that. This one comes in at a disturbingly long 100 minutes. I can’t imagine that there aren’t 10 minutes of dross that could be sliced out of this without losing anything and improving it a great deal.

There are a couple of funny kills, like the guy who gets his head punched off and the guy tossed into an electrical console and being set on fire. Most are of the machete/axe slashy/hacky variety, though.

I know there are people who apologize for this series. I’m not one of those people because I expect a little more story in my story. This is just killing, and not in ways that are ultimately very interesting.

Why to watch Friday the 13th Part VIII: Jason Takes Manhattan: Jason still kills when out of his normal bucolic element.
Why not to watch : The film can’t follow its own internal logic.