Ten Days of Terror!: Frankenstein Must Be Destroyed 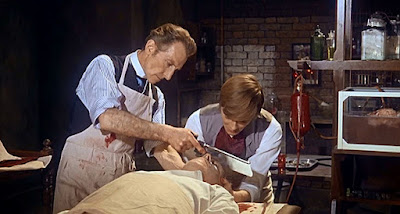 Baron Victor Frankenstein (Peter Cushing) is forced out of his native Bohemia and winds up at a boarding house in Austria-Hungary. The boarding house is run by Anna Spengler (Veronica Carlson), whose fiancé Dr. Karl Holst (Simon Ward) works at the nearby insane asylum. It just so happens that one of the inmates at the asylum is Dr. Frederick Brandt (George Pravda), Frankenstein’s former assistant who had a breakdown and went mad because of the experiments he was forced to be a part of.

Frankenstein discovers that handsome young Dr. Holst isn’t as pure as we might think. He makes extra money stealing drugs from the hospital’s dispensary and selling them—Frankenstein catches him with a pocket full of cocaine, and uses this to coerce him into helping with his plan. He needs Brandt on the outside, because Brandt has information that he needs. So in they go to break him out, but Brandt suffers a heart attack. Needing a new body for him, they choose Professor Richter (Freddie Jones), the head of the asylum. They bump him off and put Brandt’s brain in his body. So, this isn’t a body creation story, but a brain transplant story.

Eventually, Brandt’s body turns up, but not after his wife Ella (Maxine Audley) is told that her husband is alive; she talks to him but isn’t allowed to see his face (since his brain is in Richter’s body). When Brandt’s body turns up, Frankenstein, Dr. Holst, and Anna are forced to leave. Eventually, Brandt wakes up, discovers his plight, and Anna releases him. From this point forward, not a lot good happens to anyone, but I don’t typically spoil the third acts here.

Frankenstein Must Be Destroyed is a very dark movie. There is a sequence where Frankenstein essentially rapes Anna and uses that to keep her compliant and to help force her fiancé to keep working for him. That’s pretty rough fare for a movie of this vintage, and honestly, a bit of nastiness that wasn’t really necessary. The movie was already dark enough with murder and body snatching out of an insane asylum, drug trade, and more. The truth is that I can pretty much always live without the rape sequences in pretty much any movie. It’s worth noting that Veronica Carlson, Peter Cushing, and director Terence Fisher objected to the scene and fought against it but were forced to include it.

Anna’s degradation aside, this is still a dark film. It needed a particular amount of darkness to distract from the fact that this is, despite being a film that features a prominent character named Frankenstein, a very different film from the standard. We’re not building a body here; we’re doing brain surgery and organ transplantation at best. There are naturally a lot of parallels, but this might be the first film that very much wants to play on the Frankenstein myth that does away with that seemingly central aspect of the story.

As much as Peter Cushing could be associated with Baron Frankenstein for the number of times he played the role, this movie belongs to Freddie Jones. He doesn’t have a great deal of screen time until the very end when he’s playing as Brandt, but it’s the best acting in the film. He gives the creature, or, well, the brain in a different body, a great deal of pathos, which is always what the creature needs to be successful. In that respect, this is a successful film.

But the rape sequence has aged poorly at best. It wasn’t necessary when the film was created, and it’s certainly not necessary today. As such, this drops the film in terms of its overall quality and rewatchability, which is a damn shame.

Why to watch Frankenstein Must Be Destroyed: A very different Frankenstein myth in many ways.
Why not to watch: It’s surprisingly nihilistic for its era.

Email ThisBlogThis!Share to TwitterShare to FacebookShare to Pinterest
Labels: Frankenstein Must Be Destroyed, horror, Terence Fisher