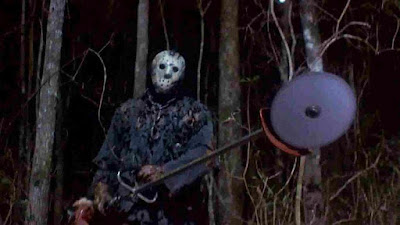 I’m sitting here, starting at the laptop wondering what there is to say about Friday the 13th Part VII: The New Blood. Ultimately, this film series is a collection of murders committed by undead serial killer Jason Voorhees. It’s what we’ve come for and it’s what we’re going to get. We’ll have a collection of teens or early 20-somethings who will get picked off one by one until we get a confrontation with Jason and our final girl. Sandwich the dozen or so kills will be a way to bring Jason back from the dead and, naturally, a way to temporarily put him away.

This time, Jason is going to get something like actual competition since our final girl is a psychic. The film was pitched as Jason vs. Carrie, and while that sounds appealing, or at least interesting, the actual film is quite a bit less so. It’s going to suffer from many of the same problems as a few other films in the series—the kills essentially happen off-screen in the sense that we don’t actually see the moment of impact in many cases. This was evidently done to avoid the inevitable X-rating.

But before we get to the killings that happen a few inches below the camera, we have to get Jason out of the chains around him at the bottom of Crystal Lake, and we’re going to get there in a very convoluted way. Young Tina Shepard (Jennifer Banko) witnesses her drunken father abuse her mother one time too many. To get away, she takes a boat out on the lake (and yes, it’s Crystal Lake), and when he comes out to get her, her latent telekinetic abilities arise. She destroys the dock he is standing on, and he falls into the water and drowns.

That’s the set-up. Years later, Tina (now Lar Park-Lincoln) returns to the lake with her mother (Susan Blu) and Dr. Crews (Terry Kiser) to try to deal with the issues she has had since that time. Well, that’s what we’re told. In truth Dr. Crews is trying to pull out more of Tina’s telekinetic powers with the belief that putting her in emotional stress will force the powers to be released. So, when the distraught Tina runs out to the dock to try to bring her father back, she instead snaps Jason’s chains, and it’s time for the killing.

Because a psychic, her mom, and her doctor aren’t much fodder for Jason’s machete, we need more people in the mix. So, conveniently, next door to the cabin where Tina is reliving the death of her father is a group of teens having a surprise party for a friend. Naturally, this is where Jason is going to vent most of his wrath.

As usual, there’s not much sense in differentiating most of the partiers. We’re going to have to know Nick (Kevin Spirtas), who will be Tina’s immediately love interest. Everyone else is cannon fodder. There will be the slutty girl, the nerdy girl, the pothead, the movie nerd, the preppy, the Black couple, and the mean girl, and a few more, and all of them will get killed in various ways over the course of the film. And, because this was made in a way desperate to avoid an X-rating (that seems so odd to say instead of NC-17), we’re not going to actually see most of them get killed. It’s just going to be heavily implied, and then we’ll see their bodies later.

And, eventually, we’ll get a showdown between Tina and Jason, and if you’ve watched any of these movies at all, you’ll have at least some sense of what’s going to happen. Someone has to put Jason back in the lake, after all, and so that’s where we’re headed. The only real question is whether Nick gets to make it to the end of the movie without being killed.

And really, that’s it. Lar Park-Lincoln is a particularly unappealing heroine. She cries almost constantly in this film since her powers only work when she is emotionally charged up…and in ‘80s anti-feminist fashion, this means crying. She also looks like she has braces. What I mean by that is that her lips are constantly pooched out as if she has braces on her teeth. She doesn’t. There’s not a damn thing wrong with wearing braces, but it’s very strange to see someone and think “She’s wearing braces” and then see that it’s just…her pushing her lips out. Nick could do better with pretty much any of the girls who are cannon fodder, except perhaps the mean girl, who is equally unappealing.

Someday, I’ll get to the end of these movies. Someday.

Why to watch Friday the 13th Part VII: The New Blood: Jason faces off against psychic powers.
Why not to watch: Most of the kills are standard fare.